Getting Real About the Post-‘Roe’ World

There was never any reason to be complacent about the end of legal abortion, nor should we think that the impact of the Supreme Court’s latest ruling will be muted. 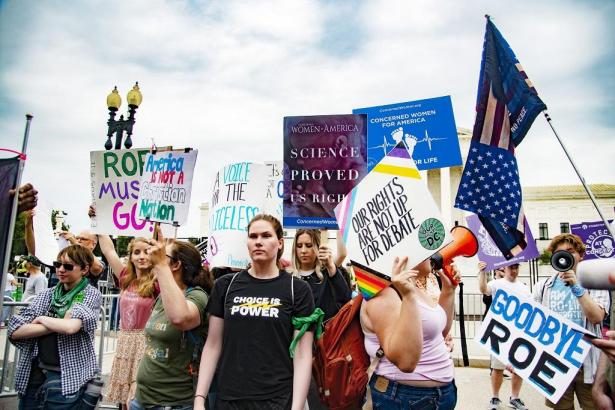 Demonstrators gather outside the Supreme Court in Washington in anticipation of a ruling on abortion rights, June 21, 2022., Patsy Lynch/MediaPunch/IPX

The Supreme Court has overruled Roe v. Wade and Planned Parenthood v. Casey. The ending of the 49-year period in which a woman had a federally protected right to terminate a pregnancy before fetal viability was inevitable as soon as Amy Coney Barrett replaced Ruth Bader Ginsburg on the Court. But while denial about the outcome is now functionally impossible, complacency about what overruling Roe means remains a potentially dangerous problem. Fighting the coming onslaught of the coercive policing of women’s bodies requires being clear-eyed about what will happen when Roe is overruled, some of which is indeed already happening.

Complacency about what a post-Roe world will look like has long been something of a cottage industry among pundits and commenters, predominantly from affluent men in blue-state urban areas who are least likely to be directly affected by the abrogation of reproductive rights. This tendency has not vanished—the comedian Bill Maher recently asserted that “we’re not going back to 1973” when Roe is overruled, earning an approving shout-out from Fox News. Perhaps one should only expect so much political insight from a comedian, but Yale Law’s Akhil Reed Amar sounded a similar note in The Wall Street Journal, providing hollow reassurances that overruling Roe won’t really be that bad. This kind of complacency from nominally pro-choice elites has deeper roots in American political culture.

One striking example of this comes from the 2014 midterms, a crucial step in the overruling of Roe, because Republicans were able to take the Senate that year. When Justice Antonin Scalia unexpectedly died in February 2016, Republicans held the seat open until after the presidential election, which was ultimately won by Donald J. Trump. Looking back, the 2014 midterms, derided as meaningless at the time, were just as consequential as any in recent memory.

One candidate who stressed that one potential consequence of the election was that Roe could be overruled if the GOP prevailed was Colorado Sen. Mark Udall, who was in a tough re-election fight with Republican candidate Cory Gardner. Udall’s forceful advocacy on the issue was prescient, but for his pains he was derisively labeled “Mark Uterus,” not only by Republicans but by multiple ostensibly neutral reporters. Gardner won, and voted to confirm all three of the justices nominated by Trump who are part of the anti-Roe majority.

The mocking of Udall as a hysterical scaremonger for talking too much about abortion rights is revealing in multiple ways. First of all, there is the transparent sexism in suggesting that it’s overreaching to emphasize rights that mostly protect women, made especially apparent by the puerile nickname. The idea that it’s somehow gauche to focus too much on reproductive rights is particularly remarkable given that coverage of the 2014 and 2016 elections was dominated by Republican-generated pseudo-scandals about a virus that killed zero Americans and one candidate’s email server management, respectively.

Also implicit in the “Mark Uterus” incident, however, were two additional forms of complacency. First of all, the survival of Roe, despite longtime control of the Court by justices nominated by Republican presidents who nominally opposed it, created a narrative that was enormously beneficial to Republicans trying to win elections in purple or blue states, like Gardner and Maine’s Susan Collins. The theory went that Republican elites didn’t really want to overrule Roe, but were merely pretending to for the sake of pandering to their base. This narrative was always false; the survival of Roe was always a highly contingent fluke, the product of several mistakes by Republican presidents. (Ronald Reagan didn’t want or expect Robert Bork’s nomination to be defeated.) We know this now, although it’s too late to change the outcome.

The other related form of complacency, thinking that the effects of overruling Roe won’t be all that bad even if you support reproductive rights, persists. There is a frequently made argument, not just by opponents of Roe, that the abortion issue has become difficult and highly polarized because of the Supreme Court’s intervention. With the Court exiting the arena, it should be possible to reach stable compromises acceptable to the majorities of each state, and the national pro-choice majority should be in a strong position to succeed in most contexts.

The idea that Roe was responsible for pro-life mobilization is not true—there was in fact substantial and powerful opposition to state reform efforts before 1973. Subsequently, the idea that the abortion issue is about to become less divisive or less prominent in American politics is a fantasy that will be disproven in short order.

Maher is right that we will not be going back to 1973, but not in the way he intended. As Dahlia Lithwick of Slate recently observed, we will be facing a future that is considerably worse. The combination of a more extremist opposition to legal abortion, the carceral mentality that has dominated American criminal law since the mid-1960s, and increased surveillance technology available to authorities will mean far more frequent and intrusive coercion being used against people trying to terminate pregnancies, as well as using the full force of the law against abortion doctors. There will be more investigations, more arrests, and more convictions. We will very clearly see why the Roe majority was right to see an implicit right to privacy in the Constitution and to see the right to terminate a pregnancy as being protected by it.

The post-Roe world, in short, will not be one of stability and civil compromises. It will be a world of chaos and terror and escalating legal and political hardball. Republican-controlled states will, at the urging of anti–abortion rights groups, engage in constant one-upmanship: passing bans, narrowing exceptions, trying to prevent women from seeking medical care in other states, even banning contraceptives like Plan B and IUDs. Women in red states going through the trauma of a miscarriage will have to worry about facing a hostile investigation and possibly arrest. The next Republican trifecta at the national level will try to pass some kind of nationwide abortion ban and may well succeed.

If any complacency about what will follow Roe will quickly evaporate in the face of reality, there is the risk that it will be replaced by a weary fatalism. Because 2022 is likely to be a favorable political context for Republicans, the party is unlikely to pay an immediate political price for its extremism, despite the unpopularity of overruling Roe and instituting draconian abortion bans, outside of deep-red states. The tendency toward despair for the pro-choice majority, which is underrepresented nationally and in most swing-state legislatures, will be powerful.

But, like the pro-life movement (who redoubled their efforts rather than giving up after the surprising unwillingness of the Court to overrule Roe was followed by Republicans losing the White House in 1992), supporters of reproductive rights need to take a long view. In the meantime, legislatures controlled by Democrats need to use their majorities to protect abortion rights and do what they can to provide a safe haven for women losing their rights in other states. And while the lack of urgency on the part of moderate and conservative Democrats regrettably makes a national response to overruling Roe doomed for the time being, the national Democratic leadership needs to stop appealing for a pro-choice Republican Party that has been gone for decades, and focus on the radicalism of the contemporary one.

Read the Original Article at The American Prospect