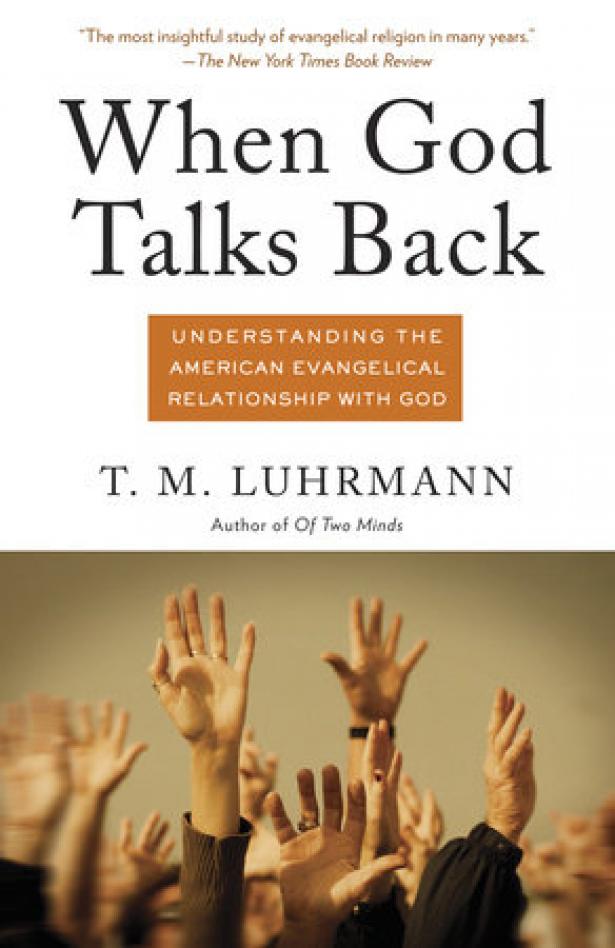 Secular Americans’ worst fears have come true: there is now scientific evidence that evangelical churches brainwash believers. They don’t merely teach that Adam and Eve actually existed and that gay marriage is an abomination. They change the way their members’ brains work. But T. M. Luhrmann, a psychological anthropologist at Stanford, argues that this is not as insidious as it sounds. On the contrary, mental conditioning has a noble lineage in the history of religion, and even (or especially) in this modern age, it can help humans flourish. “When God Talks Back” explains how rational people living in the 21st century can believe that God speaks to them — and why the rest of us should take them ­seriously.

Luhrmann did extensive fieldwork in Chicago and Northern California at Vineyard Christian Fellowship, a young “charismatic” denomination that offers a tame, middle-class version of Pentecostal practices that once scandalized most Christians. Members speak in tongues, pray for healing and seek “concrete experiences of God’s realness.” They want “the hot presence of the Holy Spirit to brush their cheeks and knock them sideways.” Some evangelicals frown on the Vineyard’s exuberance, but the denomination has gained outsize influence in evangelical culture, particularly by producing popular worship music. The Vineyard showcases, in amplified form, a style of prayer that has become widespread over the past four dec­ades.

After more than four years of observing and interviewing Vineyard members, and participating in prayer groups, Bible study and weekly worship, Luhrmann arrived at a simple but arresting hypothesis: Evangelicals believe in an intimate God who talks to them personally because their churches coach them in a new theory of mind. In these communities, religious belief is “more like learning to do something than to think something. . . . People train the mind in such a way that they experience part of their mind as the presence of God.” Luhrmann is hardly the first to interpret religious feeling through the lens of psychology. This line of analysis goes back to William James and the German theologian Friedrich Schleiermacher, and today the scientific study of prayer is a growing field. Yet “When God Talks Back” is remarkable for combining creative psychological analysis with a commitment to understanding evangelicals not merely as a scholar’s specimens, but on their own terms. The result is the most insightful study of evangelical religion in many years.

The religious movement that became the Vineyard was born in the 1960s, an era Luhrmann identifies as another “great awakening” when evangelicals’ “interest in the direct personal experience of God exploded.” Her subjects’ spirituality is not as novel as she implies: in the broadest terms, the Vineyard’s emphasis on speaking directly to God and hearing his voice in one’s private thoughts came to America with the Puritans, whose diaries were crammed with pages of self-­interrogation and supplication. Still, her basic point stands: the Vineyard’s conception of God — a confidant who calls on believers to involve him in every aspect of their lives — is a crucial element in an evangelical spirituality that has taken on new power as it has blended with charismatic worship and modern therapeutic culture.
Evangelical prayer is much more than mumbled grace at dinnertime. As Luhrmann writes, “God wants to be your friend; you develop that relationship through prayer; prayer is hard work and requires effort and training; and when you develop that relationship, God will answer back, through thoughts and mental images he places in your mind, and through sensations he causes in your body.” Evangelicals have drawn on the insights of modern psychotherapy and ancient traditions of spiritual formation to learn to pray in a way that transforms their minds and — they believe — has astonishing power in real life. (One of Luhrmann’s subjects supposes that her failure to pray properly caused another church member to suffer a miscarriage.)

Though everyone has the ability “to treat what the mind imagines as more real than the world one knows,” honing this skill requires practice. Luhrmann compares the “sophisticated expertise” required to hear God’s voice to the training that a sonogram technician needs in order to distinguish the outline of a fetus from a fuzzy black-and-white haze: it is a matter of “training perception.” The Vineyard helps members cultivate mental “absorption” by encouraging them to visualize the events of the Bible, and to imagine God’s physical presence: one pastor suggests pouring the Lord his own cup of coffee each morning.

Many believers rely on Rick Warren’s best seller “The Purpose Driven Life” — which Luhrmann calls “a folksy, spiritualized manual for cognitive behavioral therapy” — but they have also rediscovered St. Ignatius’ “Spiritual Exercises,” the classic Catholic guide to training the religious imagination. Luhrmann herself spent nine months working through the exercises with a women’s church group; the intensity of visualizing images from Christ’s life moved her to tears. Her research convinced her that Warren and Ignatius alike devised spiritual disciplines that work.

If evangelicals are expert at conjuring God, they are just as good at dealing with disappointment when God fails to show up. When his presence fades or he fails to answer a prayer, it means God has decided that your faith is so strong, you don’t need constant proof. “The concept of spiritual maturity allows people to reinterpret a disappointment as, in effect, a promotion,” Luhrmann explains. This is not merely a grand exercise in self-­delusion. Luhrmann’s subjects are aware of their minds at work. They acknowledge the elements of “pretend” in imagining God as an invisible friend sitting at the kitchen table. Vineyard teaching is clear that the Christian life requires mastering a set of mental tools. Luhrmann’s account, she says, “is fully compatible with both secular and supernaturalist understandings of God. To a believer, this account of absorption speaks to the problem of why, if God is always speaking, not everyone can hear. . . . To a skeptic, it explains why the believer heard a thought in the mind as if it were external.”

The skeptic, however, might wonder how all this gushing to God and pouring coffee for Christ shapes evangelicals’ ideas and values. There is nothing inherently conservative in a dynamic prayer life. Why, then, does evangelicals’ vivid relationship with God so often go hand in hand with conservative opinions on social issues and an uncompromising view of the Bible’s commands? Luhrmann implies that asking this question is a distraction. She says that for evangelicals, “the practices through which one knows God become more important than the abstract question of belief.” At the Vineyard, “people just did not worry about heresy. They worried about making God come alive for them.” She passes over most evangelicals’ affirmation of the Bible’s infallibility as if it were of no concern to outsiders, a tradition comparable to avoiding shellfish. One wonders if she ever engaged her subjects in a lively conversation about gay marriage or ­evolution.

All religion is an affair of both the head and the heart. Luhrmann goes too far in suggesting that evangelicalism is all feeling and no dogma: in her telling, the heart has wholly conquered the head. We cannot account for evangelicals’ history or their role in politics without paying attention to the substance of their beliefs and the social and scientific lessons their communities teach them to draw from the Bible — lessons reinforced, perhaps, by the sound of God’s voice that they discern in their own ears. But Luhrmann has helped to explain something else: why the carefully reasoned arguments that the “new atheist” writers mount against religion often fall flat. The most convincing “proof” of religion is not scientific but psychological. There is no way to undo the conviction of believers that God himself told them he is real and his story is true.