When WikiLeaks first released its hoard of documents, extracts were published in The New York Times, The Guardian, Der Spiegel, Le Monde and El País. None of these has campaigned for Assange’s freedom, though if he did anything wrong, so did they. 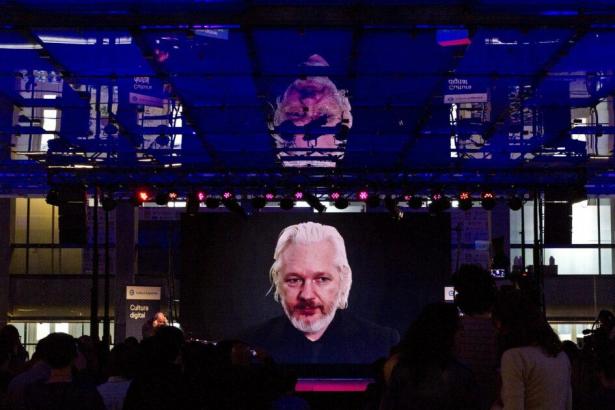 It has become easier over the last month for governments to kill or imprison journalists whom they want to silence. But the most sinister aspect of this assault on freedom of speech is that it is facing such limited resistance from the very media that is under attack.

US intelligence agencies concluded in a report declassified by President Joe Biden that Saudi Crown Prince Mohammed bin Salman had ordered the murder of journalist Jamal Khashoggi in the Saudi consulate in Istanbul in 2018. Biden began by treating him as a pariah, but is now reversing this policy in the run-up to his visit to Saudi Arabia next month which is aimed at persuading MBS to pump more crude to replace Russian exports and bring down the oil price.

In other words, the murderers of Khashoggi have got what they wanted and shown with grisly brutality that no Saudi dissident journalist is safe, a precedent that will be taken to heart in Turkey, where MBS has been visiting this week. All is now forgiven by Turkish President Recep Tayyip Erdogan, newly allied to Saudi Arabia, while the trial in absentia of the 26 alleged murderers of Khashoggi had already been transferred from Ankara to Riyadh.

It is a humiliating climbdown by the Biden administration, which justifies it by saying that it is giving priority to combatting Russia after its invasion of Ukraine. But, whatever its cause, the new American line provides a licence to hunt down and eliminate exiled journalists opposing autocratic rule.

But it is not just regimes engaged in a bit of nasty political opportunism who are giving the tyrants a free pass. Pundits openly declare that opposing Russia and China successfully requires conciliating states whose repression of millions-strong religious and ethnic groups, like the Shia in Saudi Arabia and the Kurds in Turkey, should now be dismissed as “casual cruelties” and “human rights abuses”. In future, these failings, so the pundits argue, should attract only the gentlest of taps on the wrist, so that MBS and Erdogan can be recruited to freedom’s cause.

These developments are shocking but they are scarcely surprising as Biden has always been a quick man with a white flag. The US foreign policy establishment has never wanted to abandon its old alliance with the absolute monarchies of the Gulf, whatever atrocities they commit. Saudi Arabia, Turkey and Egypt were, in any case, never likely to close their torture chambers and prisons simply because the US disapproved of them.

This makes the three-year imprisonment and impending extradition to the US of Julian Assange more significant than the Khashoggi case as a threat to democratic freedom. This is because what the WikiLeaks founder is accused of doing by the US government under the Espionage Act is no different from what every journalist should seek to do. His relentless persecution by Western states for publishing a great trove of US government documents in 2010 is simply because he was more successful than other journalists, not that he is different in any other way.

Yet when Home Secretary Priti Patel signed the extradition order on Assange this month, the wardens in Belmarsh prison stripped him naked and threw him into an isolation cell to prevent him committing suicide, according to his wife Stella.

The relentless pursuit of Assange by the US, assisted by the UK, is clearly aimed at intimidating other journalists who might be tempted by a similar giant scoop. Vast efforts have gone into smearing Assange to discredit him and deny him journalistic status.

A cavalier attitude to the facts

Accusations made about him refuted long ago linger on, such as the claim that his disclosures led to the deaths of US agents and informants whose identities were revealed by WikiLeaks. Seeking to substantiate this allegation, the Pentagon set up an Information Review Task Force headed by Brigadier General Robert Carr, who was in charge of a team of 120 counterintelligence officers who tried to compile a list of people killed because of the revelations.

After prolonged investigations, Carr admitted in court in 2013 that his team had failed to find a single person named in the hundreds of thousands of government cables who had died because of them. He added that the closest they had come was when the Taliban said that they had killed a US informant identified by WikiLeaks, but it turned out that the Taliban had lied and “the name of the individual was not in the disclosures”.

Carr’s admission should have discredited this particular allegation but, along with other myths about Assange, it is still cited by his critics, who have a cavalier attitude to the facts, most probably because their assertions are seldom questioned. For instance, deeply damaging allegations of rape were made against Assange in Sweden in 2010. These led to a prosecutorial investigation lasting 10 years which was dropped three times and restarted three times before being finally dropped in 2019 as the statute of limitations approached.

‘Don’t you dare get cold feet!’

In the same year, Nils Melzer, the UN special rapporteur on torture and other cruel, inhuman or degrading treatment, sent a 19-page letter to the Swedish government which concluded that “since 2010, the Swedish prosecution appeared to [have done] everything to maintain the unqualified ‘rape suspect’ narrative”, without progress being made or any charge issued.

The letter revealed an email exchange between the Swedish prosecutors and the British Crown Prosecution Service during which the latter, reacting to reports that Sweden might drop the investigation, wrote to Sweden’s chief prosecutor: “Don’t you dare get cold feet!”

It should not be necessary to refute or clarify these allegations against Assange since full information about them has long been publicly available. But little of it has appeared in the mainstream media and sometimes it has been ignored entirely. By and large, the campaign of denigration against Assange has succeeded in ensuring that he does not get a hearing and cannot defend himself. This assault has been backed by systematic character assassination with his opponents blithely accusing him of “narcissism” and bad behaviour without producing any evidence of either failing, irrelevant though it would be to his imprisonment and impending extradition.

But what I find most ominous about the Assange case is the willingness of the media to largely ignore it. When WikiLeaks first released its hoard of documents, extracts from them were published in The New York Times, The Guardian, Der Spiegel, Le Monde and El País. None of these publications has campaigned for Assange’s freedom, though if he did anything wrong, then so did they.

Individual journalists see the frightening implications of Assange’s fate for themselves and their profession. Andrew Neil put it well, saying that the stakes are “no less than the future of a free press and, above all, its ability to undertake investigative journalism that embarrasses or shames the powers that be”. He adds that Priti Patel’s decision “hovers like a stake over the heart of these freedoms, which are essential to any proper democracy”.

The CounterPunch website is offered at no charge to the general public over the world wide web. New articles, from an independent left-leaning perspective, are posted every weekday. A batch of several articles, including the Poet’s Basement, and Roaming Charges by Jeffrey St. Clair, are posted in the Weekend Edition. After the initial posting, these articles are available in the archives which can be searched by using any of the search boxes on the website.  CounterPunch also publishes books, and published a newsletter and magazine from 1993 to 2020.  The CounterPunch+ Subscriber area of our website features subscriber content and access.