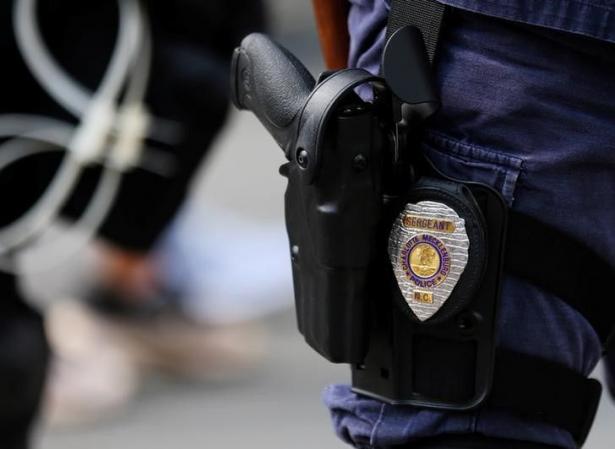 The badge and gun of a Charlotte police officer in riot gear are seen during a large security presence outside the football stadium as the NFL's Carolina Panthers host the Minnesota Vikings amid protesting of the police shooting of Keith Scott in Charlott, REUTERS/Mike Blake

(Reuters) - A U.S. Supreme Court decision on Thursday illustrated the extent to which the court has transformed a Reconstruction-era law meant to protect the rights of freed slaves and marginalized Americans into a formidable shield for the most powerful, including police, prosecutors and businesses.

The June 23 decision bars lawsuits against police for using evidence obtained without advising people of their rights – the ‘Miranda’ warnings the court mandated nearly 60 years ago that have since become the framework through which most Americans understand their rights against police intrusion.

The 6-3 ruling in Vega v. Tekoh, which was expectedly split along partisan lines, nullified essentially the only direct remedy available in those situations. (Police officers are notorious for evading internal discipline and legal consequence, even for conduct that constitutes a crime, like assaulting someone to compel a false confession.)

Justice Elena Kagan noted in the dissent that the court's ruling still allows a victim in a similar situation to suppress the improperly obtained evidence at trial.

But “sometimes, such a statement will not be suppressed," Kagan wrote. “And sometimes, as a result, a defendant will be wrongly” prosecuted, “convicted and spend years in prison,” without any redress.

In fact, that was nearly exactly what happened in the case before the court.

Terence Tekoh, a nurse assistant, alleged that Los Angeles sheriff’s deputy Carlos Vega didn’t Mirandize him and strong-armed him into confessing to sexual assault, including threatening Tekoh’s family with deportation. The state tried to convict him twice, but Tekoh has never been found guilty.

One of Tekoh’s lawyers told me that jurors urged him to sue after trial because many believed he’d suffered an injustice.

“He was found not guilty despite a supposed witness identification and a supposed confession,” Pasadena, California attorney John Burton said.

Still, the Supreme Court’s decision leaves Tekoh without a meaningful remedy for the costly and traumatic ordeal.

Roman Martinez, Vega’s attorney in the case, didn’t respond to a request for comment.

The ruling signals to law enforcement that procedures meant to safeguard individual rights during police interactions are, practically speaking, optional. It’s virtually impossible that a department would discipline an officer for the omission, or that a prosecutor would take legal action, and, now, there’s no civil legal recourse available either.

As the title suggests, the law was enacted during Reconstruction to give Black Americans a remedy for official corruption and state-sanctioned abuses: cops looking the other way or committing crimes themselves; prosecutors declining charges; and judges refusing to hold fair trials.

The idea was to provide a remedy for state-sanctioned abuses based on rights laid out in the Constitution -- the right to due process of law, legal representation and so forth.

But, since then, the Supreme Court has studiously ignored how Reconstruction reshaped our legal system, though the statute and its Congressional purpose is entirely clear, according to a 2022 law review article by David Gans, director of the civil rights program at the Constitutional Accountability Center.

“The accountability Section 1983 sought to achieve has been squelched by the Supreme Court,” Gans wrote.

Although the statute explicitly grants a right to sue government actors for violating the Constitution, "the Supreme Court's modern Section 1983 jurisprudence is more concerned with protecting the police and other government officials from suit than in reining in the systemic violence, discrimination, and abuse of power” endemic in American society.

Indeed, the court has effectively rewritten the statute, inventing a puzzling array of exceptions that enable police and officials to evade accountability.

Officials have been granted qualified immunity, which shields police from excessive force and other claims. Some have additional, unqualified immunity against suit. In fact, the court recently extended absolute immunity -- which traditionally applied to prosecutors, judges and lawmakers -- to all Customs and Border Protection agents.

The Supreme Court has also granted local sovereign immunity to departments that train and supervise officers, kicking lawsuits out of court unless they challenge a government entity’s “policy or custom” – even though the word “policy” doesn’t appear in Section 1983.

And, the court has entirely excluded states from suit under the law altogether, creating a “nonsensical distinction” that sometimes allows lawsuits against municipalities, but never against states, Gans wrote.

Kagan’s dissent highlights how conservative justices have transmogrified a law to protect Black and other marginalized Americans into a shield against accountability for powerful actors.

The dissent cited Dennis v. Higgins, a case from 1991, as an example of an appropriately broad reading of Section 1983: the ruling is arguably the only time the Court allowed suit under the statute for alleged violations of a constitutional clause that does not clearly secure an individual right.

The context? A business dispute.

The court in Dennis held that plaintiffs can use the Reconstruction-era civil rights statute to sue for a violation of what’s known as the “dormant” Commerce Clause, an implied Constitutional prohibition against states passing laws that give their citizens an unfair advantage in the marketplace (it’s derived from the Commerce Clause itself, which leaves to Congress the power to regulate interstate commerce).

The ruling allowed the owner of a tractor-trailer company to challenge new business taxes in his state under Section 1983.

To paraphrase Kagan: How could it be that a law meant to protect newly freed slaves and other marginalized Americans from official corruption can be used to enforce a right implied from Congress’ authority over commerce, but not to enforce rules necessary to safeguard Americans against police abuse?

To my mind, the court’s Section 1983 jurisprudence and its opinion in Tekoh offer a clear enough answer: Conservatives have simply placed higher priority on enforcing the rights of businesses and government officials, over those of minority Americans.

Hassan Kanu writes about access to justice, race, and equality under law. Kanu, who was born in Sierra Leone and grew up in Silver Spring, Maryland, worked in public interest law after graduating from Duke University School of Law. After that, he spent five years reporting on mostly employment law. He lives in Washington, D.C. Reach Kanu at hassan.kanu@thomsonreuters.com

Opinions expressed are those of the author. They do not reflect the views of Reuters News, which, under the Trust Principles, is committed to integrity, independence, and freedom from bias.