After Hearing 8: Watchdogs Say Trump ‘Must Be Prosecuted’

"Trump did what he did—and refused for hours to stop the violence—because it was part of a determined, months-long plan to carry out a coup. This was a crime." 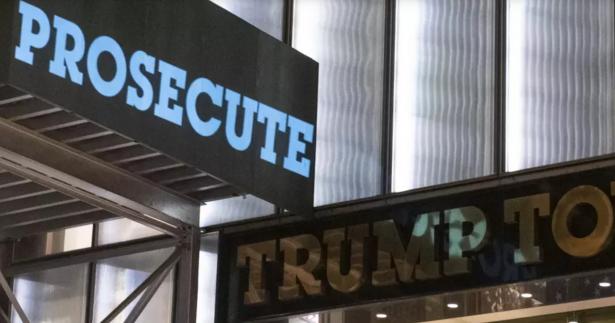 The Not Above the Law coalition projected the word "Prosecute" onto a building next to Trump Tower in New York City following the House January 6 committee's primetime hearing on July 22, 2022, Eugene Gologursky/Getty Images for Not Above the Law

The House January 6 committee's first series of public hearings came to a close Thursday with a primetime event featuring fresh evidence that former President Donald Trump gave a "green light" to the right-wing mob that attacked the U.S. Capitol last year and ignored pleas to stop the violence.

Share this article on
"It's clear from the committee's work that Trump and his allies will go to illegal and violent lengths to seek power."

Sarah Matthews, former deputy press secretary, said Trump was treating the January 6 assault like a "celebratory event" and telling the insurrectionists that "what they were doing at the steps of the Capitol and entering the Capitol was okay, that they were justified in their anger."

Matthews was referring to Trump's tweet attacking then-Vice President Mike Pence for lacking the "courage" to help overturn the 2020 election as rioters entered the Capitol in an effort to block certification of President Joe Biden's victory.

Former deputy national security adviser Matt Pottinger, who resigned along with Matthews on January 6, told the House panel that Trump opted to pour "gasoline on the fire" by tweeting about Pence, further emboldening a mob that wanted to "hang" the former vice president.

Instead of trying to call off the violence, Trump sat for hours in front of the television, witnessing the Capitol attack unfold and resisting pressure to condemn the armed mob that he had ginned up with incessant lies about mass election fraud—falsehoods that many Republican lawmakers, including Sen. Josh Hawley (Mo.), echoed.

The committee displayed security footage of Hawley fleeing after the mob breached the Capitol:

Meanwhile, "President Trump sat in his dining room and watched the attack on television while his senior-most staff, closest advisers, and family members begged him to do what is expected of any American president," said Rep. Elaine Luria (D-Va.), who led Thursday's hearing alongside Rep. Adam Kinzinger (R-Ill.).

Eventually Trump issued a video statement telling the attackers to "go home," but he closed his remarks by calling the rioters "very special." He also repeated his lie that the 2020 election was "fraudulent" and "stolen."

"We love you," Trump told the insurrectionists.

Thursday capped off a series that paired new revelations and hours of witness testimony with already-known facts to produce what legal experts and watchdog groups have described as an overwhelming case for prosecuting the former president for leading a criminal attempt to thwart the democratic process by force, increasing pressure on the Biden Justice Department to act.

"Over eight hearings, the January 6th Committee has provided undeniable proof that former President Trump and his allies planned, promoted, and paid for a criminal conspiracy to overturn the will of voters," said Sean Eldridge, founder and president of Stand Up America. "Tonight, we heard how members of the Secret Service were saying goodbye to their families as Trump egged on the violent, armed mob on January 6th. That should be chilling to every American."

"The threat to our democracy is not in the rearview mirror," Eldridge added. "More than 100 election-denying candidates are seeking office this year, including key election administration roles from county clerk to secretary of state. It's clear from the committee's work that Trump and his allies will go to illegal and violent lengths to seek power. They must be held accountable in the court of law—and we must hold them accountable at the ballot box."

Following Thursday's proceedings, the Not Above the Law Coalition projected the word "Prosecute" onto a building next to Trump Tower in New York City, underscoring its demand that Attorney General Merrick Garland bring criminal charges against the former president and likely 2024 contender.

"Trump did what he did—and refused for hours to stop the violence—because it was part of a determined, months-long plan to carry out a coup," said Robert Weissman, president of Public Citizen, a member of the Not Above the Law Coalition.

"This was a crime against America," Weissman added. "It must be prosecuted."

The House panel announced Thursday that it will be holding more hearings in September as it continues its investigation into the origins of the January 6, 2021 attack and the president's role in sparking the violence.