Workers at a Dollar General store in Holly Hill, South Carolina are taking a bold step by walking out on strike and discussing plans to unionize. 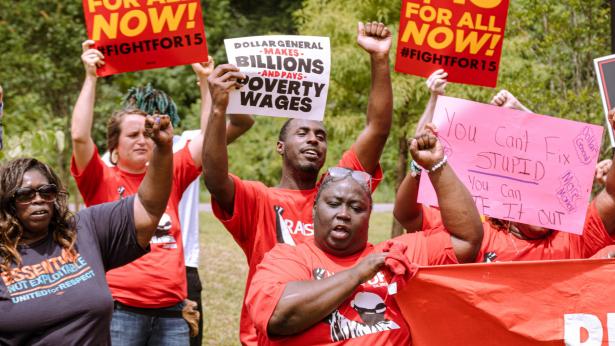 , Raise Up the South

Workers at a Dollar General store in the town of Holly Hill, South Carolina, walked out on strike on July 16. Workers are demanding job safety, a $15 minimum wage, more staff, consistent scheduling, and the reinstatement of worker Tara Thompson, who workers claim was unjustly fired.

Workers have also discussed plans to form a union. “They want us to come to work for them and make them a billion dollar company and not say a word,” said Dollar General striker Keshia Brown. “But we need a voice and that’s why I believe we need a union.”

Concerns were also raised about the lack of workplace safety in the Holly Hill store. Keshia Brown described how, “Right after we got robbed… Management was already telling me to open the store back up.” A petition from workers to the company demanded “that our safety be taken seriously and changes be made as soon as possible,” including measures so that workers can see more clearly outside of the store and removing potential fire hazards.

Tara Johnson, whose reinstatement is specifically named in the petition, says that she was unjustly fired after taking her son to get medical care, even after being approved to do so by management.

Unionization efforts at massive retailers in the US have picked up in recent years, with drives at Amazon and Starbucks winning major victories and making international news. Efforts at the multimillion dollar variety store Dollar General are increasing, building on one unsuccessful campaign in Connecticut. The fact that non-union workers have just walked out on strike, especially in the state with the lowest union density in the country, is a significant step towards organizing the unorganized in the US.

More actions are expected in the future as organizations such as Raise Up, which has worked with Dollar General strikers, continue to organize the South.