Guam: The Sharpening of the Spear’s Tip

Washington puts the island of Guam, but not the people of Guam, at the center of its military strategy in the Pacific. 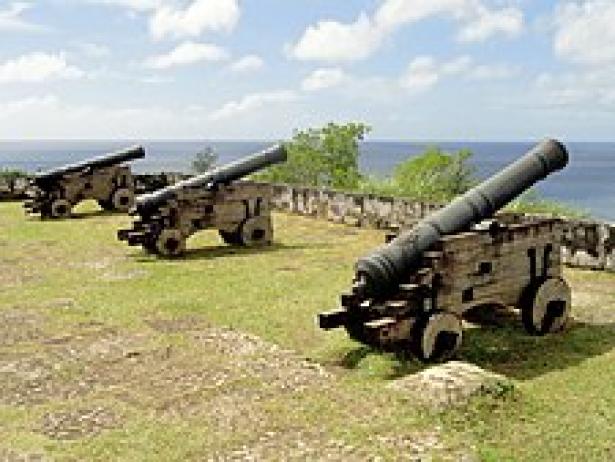 The RIMPAC exercise once again underscores the role of the islands and region in warfighting strategy as well as the complex and even paradoxical nature of “defending” and “protecting.” This is especially true for the island of Guam, the homeland of the indigenous CHamoru people. In Guam, military officials from the Joint Region Marianas assure the residents (and the indigenous CHamoru population) that the United States will continue to protect Guam against all threats, asking them to not be alarmed by military developments. However, as former member of the U.S. House of Representatives Robert Underwood points out, being told to not be alarmed is often reason for alarm. This can be seen in the latest push to make Guam more “robust” via missile defense.

The axis of the U.S. Indo-Pacific strategy seems to revolve around Guam. As a U.S. territory, Guam serves as a reliable location for logistics, power projection, and deterrence. Or, as the Hudson Institute puts it, “this US territory is essential to the security of the American citizenry.”

High-ranking officials, such as former head of Indo-Pacific Command, Admiral Phil Davidson, have testified before Congress on the importance of Guam: “I have repeatedly stated the most important action we can take to increase the joint force’s lethality is to introduce a 360-degree, persistent, air and missile defense capability on Guam.” Representatives from the Missile Defense Agency (MDA) visited the island for engineering assessments of military-occupied land. This year, the MDA decided on the architecture for Guam defense which will consist of the Lockheed Martin Aegis combat system, Raytheon Technologies SM-3 and SM-6 missiles, and Northrop Grumman Integrated Air and Missile Defense Battle Command. Furthermore, the MDA reported plans to provide for the initial delivery of the Aegis Guam System via a sole source contract to defense industry behemoth, Lockheed Martin.

Guam’s role as a militarized, strategically located unincorporated territory has various cultural, environmental, and economic effects, including the occupation of 27 percent of the island’s land by the US military. The latest geopolitical maneuvering of great powers adds another element to the threat against Guam, which makes itself visible through the layers of missile defense.

Missile defense development composes its own grammar for Guam. Its development may both continue the slow violence of further militarization and be used in a hot conflict. But this “shield” may also simultaneously be a spear. In addition to the environmental and economic impacts, the construction of the missile defense architecture is placing Guam once again in the middle. In this way, Guam will bear the burden of a double-edged spear. As the US sharpens Guam for its use as the tip of the spear, the other edge finds ways to pierce Guam’s flesh and possibly pierce vital organs as the people of Guam prepare for the possibility of being at the center of conflict as it once was in World War II.

In Pentagon-sponsored wargames involving Taiwan run at the Center for New American Security and the RAND Corporation, the simulation tends to include China hitting Guam “with a massive barrage of ballistic and cruise missiles armed with submunitions to take out Andersen Air Force Base….Then they launch follow-up attacks on Guam to prevent the U.S. military engineers from repairing damage to airfields and other installations.” China understands, in these wargames, the huge risk of attacking Guam. However, as wargaming expert Stacie Pettyjohn argues, “The operational advantages of destroying key American bases and logistics nodes, in particular those on Guam, outweigh the risks.” Arguably, Guam lives under a perpetual state of threat, even if just discursive.

The twisted grammar of the missile defense conversation, however, acknowledges this and uses it as a justification for further militarization of the island, in this instance, 360-degree missile defense. As military officials have said, Guam is not a place to simply fight from, it must now be fought for. They stress the urgency and timely nature of defending the island’s vulnerabilities, while simultaneously arguing that this will not provoke China. Rather, Guam’s missile defense becomes a key to deterrence in the region. U.S. forces and facilities in the island would enable a drawn-out conflict, which China does not want.

Experts acknowledge, however, that this defense will not stop everything. For example, Rebecca Heinrichs of the Hudson Institute writes that a defense architecture for Guam cannot be held to a “zero-leak” standard. In military circles, a “leaker” is a warhead that has escaped layers of missile defense. Thus, scholars and policy wonks want to shift the conversation from purely defending Guam to showing that even if Guam is attacked, operations will continue from the island. As another Hudson Institute scholar Oriana Skylar Mastro writes “as long as the US is reliant on Guam to fight and win a war, China will ensure that it can effectively target the island.”

A chasm lies between outsiders viewing a conflict involving Guam and this same conflict seen from Guam’s perspective. The risks of escalation and the result of conflict mean something entirely different for those who actually live in Guam. A few missiles making it through may not be the worst-case scenario for the military’s ability to sustain operations, but for those who call the island home, this can destroy lives and livelihoods. Resiliency in Guam military operations does not translate into resiliency for the island’s society. The threat of deterrence failing should send chills down our spines, but we should also consider who placed the target on our heads in the first place. The conversation about missile defense and Guam’s future in a conflict with China must include those who bask in the warm Guam sun, feel the Guam wind on their skin, or are rooted generations deep in the island’s soil.

Kenneth Gofigan Kuper is director of the Pacific Center for Island Security and Assistant Professor of Political Science (specializing in Security Studies and International Relations) and Chamoru Studies at the University of Guam. He holds a Ph.D. in Political Science and a M.A. in Pacific Islands Studies from the University of Hawaiʻi at Mānoa. His dissertation focused on the complexities of military presence and security in Guam through the concept of “sustainable insecurity.” His research interests include the role of islands in global politics, Indo-Pacific geopolitics, militarization of the Pacific Islands, decolonization, and the reconceptualization of security. He can be reached at kennethkuper@gmail.com

This is part of a series produced between the Feminist Peace Initiative and Foreign Policy In Focus featuring critical voices on the militarization of the Asia-Pacific region. You can read the first essay in the series here as well as other articles on U.S.-NATO coordination, South Korea’s expanded military footprint, the U.S.-China arms race, and the Hawaiian perspective.