The new documentary "Aftershock" tells the stories of two young women who suffered preventable deaths, and of the activists working to protect Black mothers. 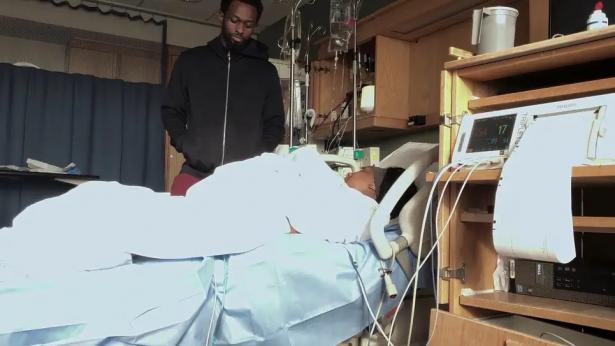 In October 2019, Shamony Makeba Gibson, a 30-year-old Black woman, collapsed in her Brooklyn home two weeks after giving birth to her second child. Though she’d experienced symptoms of a blood clot, the question that medical professionals asked again and again as they treated her was whether or not she was on drugs.

Gibson—who was not, as her family insisted again and again to healthcare providers, a drug user—died of a pulmonary embolism, the condition her mother suspected she was suffering from all along.

Aftershock, which premiered on Hulu Tuesday, examines the Black maternal mortality crisis through the tragic and preventable deaths of Gibson and another woman, Amber Rose Isaac. The film, directed by Paula Eiselt and Tonya Lewis Lee, follows their survivors as they struggle with the loss of their partners, sisters, and daughters—the aftershocks that give the film its title—and funnel their grief into activism.

The U.S. maternal mortality rate is more than twice that of peer nations like Canada and the U.K., but the dangers childbirth poses to Black American women are particularly stark. Nationwide, Black women are three times more likely than white women to suffer childbirth-related deaths, and the gulf is even wider in New York City, where Black women are 12 times more likely to die than their white counterparts.

Eiselt, the director of the 2018 documentary 93Queen, which followed the efforts of Hasidic women in Brooklyn to establish a women’s EMT corp, partnered with Lee, who’s served as a producer on projects like the film adaptation of Walter Dean Myers’ Monster and the TV series She’s Gotta Have It, which was created by her husband, Spike Lee. They were initially inspired to create Aftershock after the publication of a ProPublica investigation that helped put the Black maternal health emergency into the national spotlight.

“A few weeks after we met, that’s when Shawnee Benton-Gibson put out a call that she was creating this event called ‘Aftershock’ to commemorate Shamony, who had just passed two months prior,” said Eiselt. “So I saw that and immediately called Tanya and was like, ‘I think this is something we should explore and get into.’”

Just months later, Isaac, a 26-year-old Black woman from the Bronx, delivered her first child via an emergency c-section. Days earlier, she’d tweeted, “Can’t wait to write a tell-all about my experience during my last two trimesters dealing with incompetent doctors at Montefiore.” Instead, she died without ever meeting her son, Elias.

In the wake of her death, Isaac’s partner Bruce McIntyre III, like Benton-Gibson and Shamony’s partner Omari Maynard, became a Black maternal health activist, and Aftershock documents the families as they hold press conferences, give speeches, and testify before political bodies.

“[Maynard and McIntyre], those two were just in Washington, D.C., speaking on maternal mental health,” said Eiselt. “They’re not stopping.”

The film also travels to Oklahoma, one of the states with the highest maternal death rates. There, the filmmakers followed a Black woman as she navigated pregnancy and childbirth and visited a Tulsa hospital that served a high proportion of women of color and was struggling with poor maternal health outcomes. Though the staff of the labor and delivery unit was working with Harvard Medical School OB-GYN Dr. Neel Shah to address these failures of care, Eiselt said that some of the Oklahoma practitioners the filmmakers spoke to “bristle[d]” at the mention of the history of anti-Black racism in Tulsa.

“It’s hard to say what those providers think,” said Eiselt. In preliminary Zoom conversations, some doctors reacted to discussion of the national maternal mortality problem as if it were “offensive to even recognize it.”

“Because to them, they’re these O.B.s, saving women,” said Eiselt, “and so they were defensive in that way.”

“We’ve already seen so much confusion about how we care for women that we’re absolutely going to see these deaths go up,” said Lee. “Women are going to continue to be more and more dismissed.”

“Forced birth in a country where Black women are dying at three times the rate of white women is the most anti-life thing you can do,” Eiselt added. “But we already know that preserving life is not the goal of this.”

Still, there are also causes for optimism, as activists like Isaac’s and Gibson’s survivors help lead the charge for increased access to doula and midwifery care, and a new generation of healthcare workers confront centuries of bias within American medicine. Even some healthcare providers who are reluctant to contend with the deadly effects of racism may no longer be able to fully ignore the problem.

“I think that the good news is they know it’s a problem,” said Lee. “They also know they’re getting to the place where they can’t really just blame Black women for the issue. There is an understanding that there’s a systemic issue that’s at hand here.”