The Democrat Who Thinks He Can Win Back Missouri With Populism

Lucas Kunce, a candidate in Tuesday’s Senate primary, is running an anti-corporate campaign.

August 2, 2022 Walter Shapiro The New Republic
Printer friendly
The Democrat Who Thinks He Can Win Back Missouri With Populism Published August 2, 2022 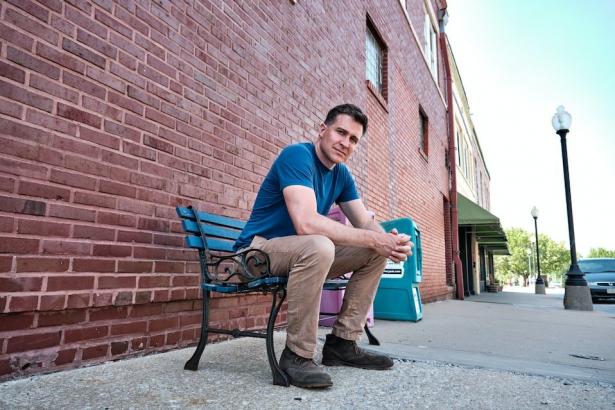 For almost an hour, punctuated by my occasional question, Democrat Lucas Kunce hammered home the theme that animates his uphill Senate campaign—the economic “gutting” of his home state of Missouri by greedy corporations and their political enablers.

Dressed in a black T-shirt, Kunce, a 39-year-old, Yale-educated Marine who served in Iraq and Afghanistan, radiated coiled energy as passion rose in his voice. “The country-club Republicans are the reason we have Donald Trump,” he said. “They sold our industries overseas and told us that it was good for us. They ran Nafta through and told us it was good for us. They said Big Ag was good.” Then, turning on his own party, he added, “Frankly, there were a lot of country-club Democrats that were doing it right alongside them. And that’s why when Democrats stopped standing for something different and stopped fighting for workers, they started losing.”

We were sitting outside a coffee shop in what might be the epicenter of Democratic faded dreams—Harry Truman’s hometown of Independence, Missouri, where Kunce now lives. For a century, from 1904 to 2004, Missouri was the nation’s bellwether state, voting with the winning presidential candidate in every election except 1956. But it has been all downhill for Democrats in the last decade, as white non-college-educated voters stampeded over to the Republican side. Even in 2018, a terrible year for the GOP, Democratic Senator Claire McCaskill lost her bid for a third term by more than 100,000 votes. Then Trump romped in Missouri, two years later, by a 15-point margin.

With his populist, anti-corporate arguments, Kunce comes out of the Truman “give them hell” tradition. He strongly resembles Democratic Senate nominees John Fetterman in Pennsylvania and Tim Ryan in Ohio, who have pitched their campaigns around winning back working-class voters. But neither of them boasts Kunce’s military record—he joined the Marines after graduating from the University of Missouri Law School and now holds the rank of lieutenant colonel in the reserves.

But first, Kunce has to win Tuesday’s Democratic primary in Missouri against self-funding beer heiress Trudy Busch Valentine. Even though Kunce has raised $4.7 million since he declared for the Senate in March 2021 (more than half in small contributions), he is being outspent by an almost five-to-one margin on television in the closing days before the primary. There have been few public polls: A recent Emerson College survey has Busch Valentine leading Kunce by a 39–35 percent margin, while SurveyUSA implausibly points to a landslide victory for Busch Valentine. But without any recent history of contested Democratic statewide primaries or reliable turnout estimates, polling is about as accurate as a blunderbuss.

The primary is a study in contrasts—Kunce’s disciplined anti-corporate message versus Busch Valentine’s genial generalities. After ducking debates, Busch Valentine has given occasional television interviews that offered an adventurous can-she-get-through-the-next-answer quality. Last Monday, speaking with KMOX in St. Louis, she initially responded to a question about laws banning school discussion of gender identity in the early grades by denouncing “critical race theory,” which is both a right-wing talking point and a subject totally unconnected with the query. As Jeff Smith, a St. Louis-based Democratic lobbyist, put it, referring to another stumbling novice candidate, “She’s Herschel Walker with more money and fewer concussions.”

Democratic hopes in November had initially been buoyed by disgraced, sex scandal–scarred former Governor Eric Greitens leading in the GOP polls for the seat of retiring Senator Roy Blunt. But polls and portents suggest that Greitens is fast fading, with right-wing state Attorney General Eric Schmidt now the favorite to win the GOP primary. Schmidt has his own vulnerabilities, such as his staunch advocacy of a 2011 plan to make St. Louis a hub for trade with China. “If Missouri were a five-point state, Schmidt would be vulnerable,” says Stephen Webber, a former chair of the state Democratic Party who is now the political director for the Missouri AFL-CIO. “But not in a 17-point race.”

Even with daunting odds against the Republicans, Kunce would be an intriguing Senate candidate, assuming he prevails in the primary. What he offers is a different road for the Democrats than that of moderates such as McCaskill and now Busch Valentine. “Kunce may be onto a strategy that pays dividends down the line,” said Daniel Ponder, a political science professor at Drury University. “It might signal a return to Democratic populism.”

Like Elizabeth Warren during the Democratic presidential primaries, Kunce is adept at fusing his life story with his policy positions. As we talked in Independence, on an early summer afternoon, Kunce conjured up his hand-to-mouth childhood in Jefferson City, Missouri. “I remember going to the grocery story with my mom and having her write the check and then begging the manager—Mr. Rackers—not to cash it until she could cover it,” he recalled. Then Kunce pivoted to life today. “Stores like that don’t exist anymore because Walmart came in on that side of town and ran them out of business,” he said. “And now, if you want to get through to the end of the month, there’s no Mr. Rackers. You’re getting a payday loan and 607 percent interest.”

What Kunce is offering voters is a fresh set of political villains—predatory lenders, corporate executives shipping jobs to China, and private equity firms buying houses and then jacking up the rents. And what he is up against in Tuesday’s primary illustrates his populist arguments, since Busch Valentine has injected $5 million of her personal wealth into the race to fund her late TV blitz.

But there’s much to be said for a different-drummer Democrat in a difficult political environment. Smith, who has not endorsed in the race, adroitly summed it up: “Kunce is fresh, he’s got a unique message, he presents well. What do we have to lose?”

Walter Shapiro is a staff writer at The New Republic.