Pelosi Visit to Taiwan Will Increase Tensions Between US and China, Experts Say

“I think that Speaker Pelosi’s visit to Taiwan will certainly contribute to the deterioration of US-China relations,” said Philip Thai, an associate professor of history and Asian studies at Northeastern University. 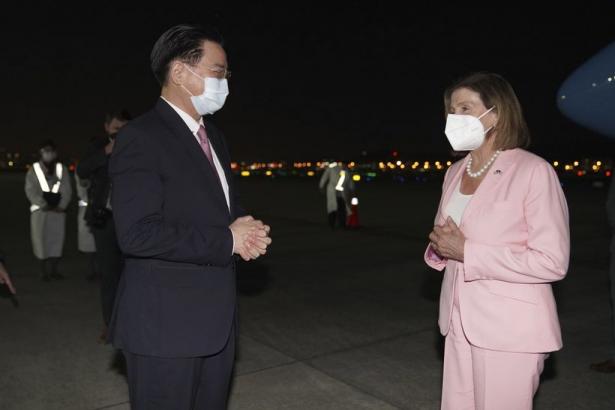 In this photo released by the Taiwan Ministry of Foreign Affairs, US House Speaker Nancy Pelosi was greeted by Taiwan's Foreign Minister Joseph Wu as she arrived in Taipei on Tuesday., Associated Press

Foreign policy experts said Tuesday that House Speaker Nancy Pelosi’s arrival in Taiwan, a momentous event making her the highest-ranking American official in 25 years to visit the self-ruled island claimed by China, could lead to heightened tensions between the US and Chinese governments.

“I think that Speaker Pelosi’s visit to Taiwan will certainly contribute to the deterioration of US-China relations,” said Philip Thai, an associate professor of history and Asian studies at Northeastern University.

Thai, the author of “China’s War on Smuggling: Law, Economic Life, and the Making of the Modern State, 1842-1965,” said the breakdown in US-China relations has been “years in the making,” citing examples such as Donald Trump taking a call with Taiwan’s president shortly after winning the 2016 election.

“The Speaker’s refusal to listen to the advice of the US military, the Biden Administration, and the Asia allies whom she is also visiting is not just reckless: it is irresponsible,” wrote Allison, whose books include “Destined for War: Can America and China Escape Thucydides’s Trap?”

“For an analogy, think of the Archduke who insisted on going to Sarajevo in June, 1914–and provided the spark that became World War I,” Allison wrote, referring to Archduke Franz Ferdinand, who was assassinated during his trip to Sarajevo.

Robert Ross, a Boston College political science professor who focuses on Chinese security policy and US-China relations, said China will respond to Pelosi’s visit by using economic and military tools at their disposal.

“We can expect the Chinese to increase sanctions against Taiwan, [and] to carry out military activity that might compel the US to prepare for war just in case,” said Ross, who’s also a member of the National Committee for US-China Relations. “There doesn’t seem to be any upside [to Pelosi’s visit], but I think we’re all aware of the potential downside.”

China had vowed to retaliate if Pelosi visited Taiwan, with speculation centering on military exercises and possible incursions by Chinese planes and ships into areas under Taiwanese control.

After Pelosi touched down in Taiwan on Tuesday, the Chinese government announced it would conduct “a series of joint military operations around Taiwan Island, and conduct joint air and sea exercises in the sea and airspaces of the northern, southwestern, and southeastern Taiwan Islands,” according to an English translation of a statement from the Eastern Theater Command of the Chinese People’s Liberation Army.

The statement said the military exercises are a “solemn deterrent against the recent major escalation of the negative actions of the United States on the Taiwan issue, and a serious warning to the ‘Taiwan independence’ forces seeking ‘independence.’”

But Frank Figliuzzi, a retired assistant FBI director and commentator, on Tuesday framed Pelosi’s visit as a warning to China, rather than the other way around.

“Make no mistake, this is a warning to China, and a likely result of intel indicating China is moving closer to take Taiwan,” Figliuzzi tweeted.

It’s also irresponsible, according to Joseph Fewsmith, a Boston University professor of political science and international relations who’s authored several books on China including “The Logic and Limits of Political Reform in China.”

“I think that it is irresponsible for Speaker Pelosi to go to Taiwan, especially at a time like this,” Fewsmith said via email. “Relations with China have been very tense, and both sides should be working to ease those tensions. Pelosi’s trip will certainly add to the tensions.”

Pelosi defended the visit Tuesday in a statement, calling it a gesture of support for Taiwan’s democracy.

“Our congressional delegation’s visit to Taiwan honors America’s unwavering commitment to supporting Taiwan’s vibrant Democracy,” Pelosi said. “Our visit is part of our broader trip to the Indo-Pacific — including Singapore, Malaysia, South Korea and Japan — focused on mutual security, economic partnership and democratic governance. ... America’s solidarity with the 23 million people of Taiwan is more important today than ever, as the world faces a choice between autocracy and democracy.”

Meanwhile Ryan Hass, a scholar on China at the Brookings Institution, tweeted Tuesday that the Chinese government has swiftly responded to Pelosi’s visit.

“Against the backdrop of @SpeakerPelosi‘s arrival in Taipei, there are several events in motion,” Hass wrote. “Proximately, Beijing appears to have begun responding through economic measures against Taiwan. There also are reports of cyber operations directed against Taiwan.”

He said China’s reaction won’t be measurable in the moment but rather an “accumulation of actions” over time.

“Beijing will seek to show [the Taiwanese] people that there are risks and consequences for relying on US instead of working with Beijing,” Hass tweeted. “If past is prologue, such efforts by Beijing may help demonstrate to a domestic audience that PRC is ‘teaching Taiwan a lesson,’ but they likely will further sour public opinion in [Taiwan] toward China.”

Hass said there’s also a “narrative battle” playing out between Beijing and Washington over Pelosi’s visit.

“The PRC argument is that US is hollowing out its commitments, using TW to try to control China, and stirring trouble; if there is escalation, it’s America’s fault,” Hass tweeted, adding that it’s a “good thing” that US and Chinese officials remain in direct communication with one another.

He wrote that the odds “of uncontrolled escalation diminish when both sides are able to have candid private conversations and clarify the intentions of other side’s actions,” but he also conceded that the future could be “bumpy” for the rival world powers.

“It will be important for officials to remain in direct contact, for each side to exercise discipline, and focus on preserving peace and stability in Taiwan Strait,” Hass tweeted. “Smarts, not flexes of strength, will be needed to navigate this period.”

Material from the Associated Press was used in this report.