Kansas voters affirmed a women’s right to choose. Meanwhile, Republicans across the US elevated extremist candidates who may be unpopular in general elections 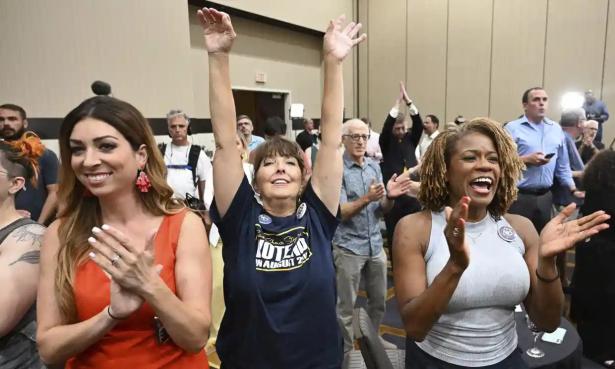 Republican candidates from Arizona to Pennsylvania ought to worry. On Tuesday, voters in Kansas rejected efforts to gut a woman’s right to choose. In 2020, Donald Trump trounced Joe Biden there 56-42. Two years later, an anti-choice referendum went down in defeat 59-41. Suburban moms and dads had thundered; turnout soared. The supreme court’s wholesale attack on Roe backfired.

The competing opinions authored by Justices Alito, Thomas and Kavanaugh may gift the Democrats a two-seat gain in the Senate, and doom Republican pick-ups of governorships in Michigan and Pennsylvania. Grasp more than you can hold, and you will be left with nothing, the Talmud says. On primary day, the high court’s decision in Dobbs seems to have energized plenty of otherwise loyal Republicans. By the numbers, 65% of Americans believe the constitution enshrines a right of privacy even as they hold doubts about abortion.

Tudor Dixon, the Trump-backed winner of Tuesday’s Michigan Republican gubernatorial primary, believes that a 14-year-old raped by a relative should be forced to carry her pregnancy to term. “Yeah, perfect example,” she told an interviewer.

Her remarks now are a centerpiece of incumbent Democrat Gretchen Whitmer’s re-election efforts. Dixon opposes exceptions to an abortion ban in cases of rape and incest. She trailed Whitmer by 11 points in a July poll.

The Michigan Right to Reproductive Freedom Initiative may also appear on the fall ballot. Once upon a time opponents of Roe claimed the ruling was wrong because it was “anti-democratic”.

Tuesday’s contests were also about the 45th president exacting revenge and promoting the “big lie” – that he was defrauded of victory.

To be sure, not all Republicans were buying what the former guy was selling. But he had greater success than Kansas’s pro-lifers. Trumpism remains very much alive.

In the state of Washington, incumbents Jaime Herrera Beutler and Dan Newhouse stand on the verge of rebuffing primary bids by Trump-endorsed challengers. Both Representatives Herrera Beutler and Newhouse voted to impeach the ex-reality show host over his role in the January 6 insurrection.

On the other hand, Michigan’s Representative Peter Meijer, who voted for Trump’s impeachment, lost to John Gibbs, a Trump-backed challenger. Gibbs had received a boost from congressional Democrats, as part of an audacious strategic move to empower Republicans they think will lose in the general elections. Meijer, a supermarket chain scion, lost by four points.

With the rightwing Gibbs as the Republican nominee, the Democrats may actually pick up a House seat. Had Meijer emerged with the Republican nod, he would have been favored. All this raises the question of whether Democratic talk about putting the country ahead of party is partisan blather.

Elsewhere, Trump claimed the head of Republican Rusty Bowers, the outgoing speaker of the Arizona senate. He had opposed efforts to overturn the 2020 election, and appeared before the January 6 select committee.

Days after Bowers testified, Trump declared: “Bowers must be defeated, and highly respected David Farnsworth is the man to do it.”

“This is a real conspiracy headed up by the devil himself,” he explained at a debate.

Along with Farnsworth, Mark Finchem, a diehard election denier and conspiracy theorist, notched the Arizona Republican nomination for secretary of state. He too had Trump’s blessing.

As for the state’s Republican primary for governor, Kari Lake holds a two-point lead with more than 80% of precincts reporting. Like Finchem and Farnsworth, Lake garnered a Trump endorsement and rejects Biden’s legitimacy as president. Whether she actually wins the primary and can prevail against Democrat Katie Hobbs, the current secretary of state, remains to be seen.

With Kansas’s resounding no vote, Democrats have good reason to make abortion a major issue for the midterms. Of course, as Republicans learned on Tuesday, it is all too easy to go off the deep-end.