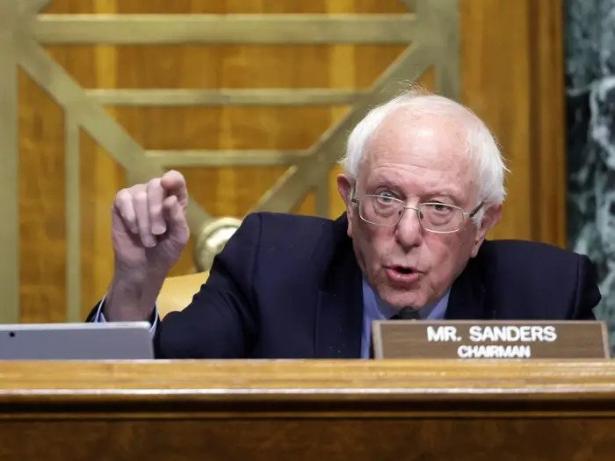 Let me be honest with you in saying that I have very ambivalent feelings about the reconciliation bill that was passed in the Senate on Sunday, and which I voted for. This bill was a chance to do big things. It did very modest things. It was a chance to stand up boldly for the working families of our country and restore their faith in government. It didn't.

In my view, after weighing the pluses and the minuses of the bill, the pluses won out and I voted for it. But let's be clear. This is only the beginning. We still have a long way to go to create the kind of economic, social, racial, and environmental justice the people of our country deserve. And that's not going to happen unless we fight for it.

As you know, a reconciliation bill is one of the few opportunities we have in the Senate to pass major legislation with 50 votes, not the usual 60. In other words, if all 50 Democrats had stood together we could have taken a significant step forward in addressing the major economic, social, and environmental crises facing our country.

That's not what happened.

Two corporate Democrats, Senator Manchin and Senator Sinema, both of whom receive huge amounts of campaign contributions from powerful special interests, prevented that from happening.

So, sisters and brothers, what does this bill do? Why did I vote for it?

This legislation makes important investments in clean energy and energy efficiency. At a time when we face the existential crisis of climate change, the most significant part of this bill is an unprecedented $300 billion investment in clean energy, including a $7 billion solar roof top proposal that I introduced. This bill could help increase U.S. solar energy by 500 percent and more than double wind energy by 2035. That is no small thing.

And let me be clear. An investment in clean energy of this size did not happen by accident. It occurred because the progressive community has been pressuring the political system for years to act with urgency on this life-and-death issue, and we should be proud of what we accomplished. Is the funding in this bill for sustainable energy and energy efficiency large enough? No. Does it include a Civilian Climate Corps that calls a generation of young people into service to help build a better sustainable future? No. But, all and all, it is a major step forward in addressing the enormous climate crisis the planet faces.

But here is the very negative aspect of this bill. Unbelievably, at a time when we are trying to cut carbon emissions, this bill provides massive giveaways to the fossil fuel industry. Under this legislation, up to 60 million acres of public waters must be offered up for sale each and every year to the oil and gas industry before the federal government could approve any new offshore wind development. And that’s not all. The fossil fuel industry will benefit from a side deal that would approve the $6.6 billion Mountain Valley Pipeline — a fracked gas pipeline that would span 303 miles from West Virginia to Virginia, and potentially on to North Carolina. This is a pipeline that would generate emissions equivalent to that released by 37 coal plants or by over 27 million cars every year and is vigorously opposed by the environmental community. It is beyond comprehension that these anti-environmental provisions are in the bill.

In terms of prescription drugs this bill takes a small step forward in doing something that progressives have demanded for years. The good news is that it will allow Medicare to negotiate the outrageously high price of prescription drugs and lower drug costs. The bad news is that these negotiations won't go into effect until 2026 and they will begin with only 10 drugs. Under this bill we will continue paying, by far, the highest prices in the world for our medicines for the indefinite future.

In terms of tax policy, this bill begins the work of making the wealthy and large corporations pay their fair share in taxes by imposing a 15 percent minimum tax on corporations. It is a step forward when large profitable corporations will no longer be able to completely avoid paying their taxes. Further, this legislation gives the IRS the resources they need to pursue the estimated $1 trillion in taxes not paid by the wealthiest people in this country, and will help ordinary, working people get their returns faster.

Brothers and sisters: we may get attacked by the corporate, political, and media establishments for having bold ambitions that challenge the power of the 1 percent and wealthy campaign contributors. We will be criticized for standing up for working families and demanding the establishment of programs that already exist in many other countries. But what we know and understand is that poll after poll shows that our agenda is enormously popular. It is what working class people all over this country want and need.

Working people don’t have powerful lobbyists in Washington D.C. advocating on their behalf. They don't have super PACs that spend hundreds of millions buying and selling politicians. All we have is ourselves — the power of the people united.

Today I hope you will sign my petition to show that we are in this together.

Please sign my petition — tell the U.S. Senate that you want bold legislation that adequately addresses the needs of the American people.

No real change ever comes about in this country from the top on down. It always happens from the bottom on up.

Thank you for adding your name today to show that our movement stands together on this.