"If you're not fed up," said watchdog group Public Citizen, "you're not paying enough attention." 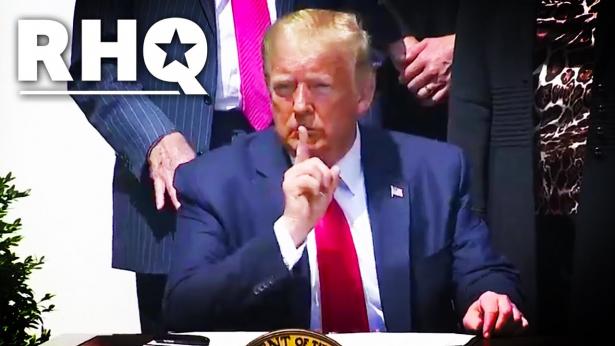 Former U.S. President Donald Trump is being investigated for potential violations of the Espionage Act, obstruction of justice, and unlawful removal of government records, according to the warrant authorizing the recent federal search of Mar-a-Lago, which was released Friday.

"This is insane. If you're not fed up, you're not paying enough attention," tweeted the advocacy group Public Citizen in response to the Espionage Act revelation.

Some reports about the warrant and an inventory of what agents with the Federal Bureau of Investigation removed from the Florida residence—including from Breitbart, Fox News, and The Wall Street Journal—came before a federal judge's 3:00 pm ET deadline for Trump's attorneys to respond to a U.S. Department of Justice (DOJ) request to unseal the documents.

Though Trump's legal team had copies of the documents—meaning he could have made them public himself—the ex-president said on social media and to government lawyers that he did not oppose releasing the materials through formal legal channels, which led U.S. attorneys to request that the court do so.

As Charlie Savage at The New York Times summarized:

The search warrant for Trump's residence cited three criminal laws, all from Title 18 of the United States Code. Section 793, better known as the Espionage Act, which covers the unlawful retention of defense-related information that could harm the United States or aid a foreign adversary; Section 1519, which covers destroying or concealing documents to obstruct government investigations or administrative proceedings; and Section 2071, which covers the unlawful removal of government records. Notably, none of those laws turn on whether information was deemed to be unclassified.

The receipt for property shows FBI agents took over 20 boxes of materials from the former president's home. The inventory lists two binders of photos, a handwritten note, information regarding the president of France, "top secret" and other classified documents, and Trump's executive grant of clemency for Roger Stone.

"The FBI seized 11 sets of classified documents, four sets top secret, one of those secure compartmentalized info," noted Noah Bookbinder of the watchdog group Citizens for Responsibility and Ethics in Washington (CREW). "That's an awful lot, and I struggle to think of a good explanation for why all that would be there, particularly after several requests and negotiation."

Trump claimed on his Truth Social platform Friday: "Number one, it was all declassified. Number two, they didn't need to 'seize' anything. They could have had it anytime they wanted without playing politics and breaking into Mar-a-Lago. It was in secured storage, with an additional lock put on as per their request."

Savage explained that even if the former president's declassification claim is true, he could still face legal trouble:

For one thing, two of the laws that a search warrant executed at Mar-a-Lago this week referred to—Sections 1519 and 2071 of Title 18 of the United States Code—make the taking or concealment of government records a crime regardless of whether they had anything to do with national security.

For another, laws against taking or hoarding material with restricted national security information, which generally carry heavier penalties than theft of ordinary documents, do not always line up with whether the files are technically classified.

The third law referenced in the warrant—Section 793, or the Espionage Act—"makes no reference to whether a document has been deemed classified," Savage highlighted. "Instead, it makes it a crime to retain, without authorization, documents related to the national defense that could be used to harm the United States or aid a foreign adversary."

Details of the search warrant and inventory followed reporting by The Washington Post late Thursday that FBI agents were attempting to recover classified nuclear weapons documents from Trump's home on Monday.

The Times' Alan Feuer noted Thursday that the DOJ did not seek the release of the affidavit in support of the warrant, arguably "the most informative—and sensitive—document connected to the search of Mar-a-Lago."