A side deal with Joe Manchin attempts to approve a pipeline in his backyard and speed through permitting rules. Progressives should make their own conditions. 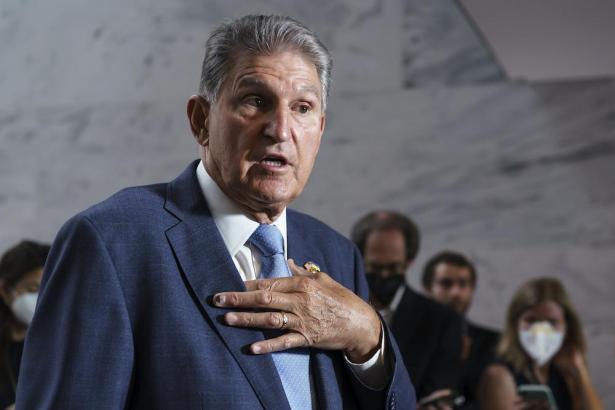 It took a couple weeks for The Narrative about the Biden era to change from a failed presidency to a consequential restorer of policy ambition. Despite containing about one-ninth of the domestic spending initially envisioned in the Build Back Better bill, the Inflation Reduction Act’s $369 billion investment in energy production, climate mitigation and advanced manufacturing, along with the extension of the American Rescue Plan’s affordability measures for 12 million Affordable Care Act exchange customers and the beginnings of potentially significant prescription drug price reforms for seniors, was enough to rewrite the script.

But there’s one more bill left on the table, the result of a side deal between Sen. Joe Manchin (D-WV) and the Democratic leadership. Blandly known as “permitting reform,” this initiative (which could not go into the IRA because it isn’t budgetary in nature and therefore is ineligible for reconciliation) would, according to its supporters, accelerate timelines for energy projects nationwide by effectively shortening the time allotted for reviews. It is scheduled get a vote in the House and Senate by the end of September.

It’s an interesting inversion of a dynamic that we saw last year. When Build Back Better was split between infrastructure and social spending, progressives helped pass the infrastructure bill based on a promise of a vote later on the spending package. What they eventually got took nearly a year and was quite watered down. Now it’s Manchin advancing the spending bill, based on a promise to get permitting reform.

With the IRA done in the Senate and set to wrap this week in the House, progressive members have no reason to hold themselves to Manchin’s deal, and are free to assess whether permitting reform makes sense on the merits. It does not. If Manchin wants another victory for his favored fossil fuel industries, he should either get the Republicans he just backstabbed on board to do it, or give something more to Democrats in exchange.

Some progressive observers have talked themselves into the idea that permitting reform is necessary to speed up renewable energy projects. Such a mindset reflects a core tenet of supply-side progressivism—the idea that overzealous application of laws designed to restrict building need to be recalibrated.

It’s a compelling yet misleading theory. Permitting is really about power, and if the entity wanting to build has enough, they can cut through red tape with little resistance. Less than ten years ago there was no such thing as an American oil export industry. Today the U.S. is the biggest oil and gas producer in the world, the sixth-largest exporter of oil, and the second-largest natural gas exporter. The entire architecture for that transformation had to be devised, permitted, approved, and built—and it was, with rapid speed, including thousands of wells, transportation infrastructure like roadways and pipelines, liquefied natural gas export terminals, and much more.

In fact, the sector wildly overbuilt in that decade, with investors losing so much money during the pandemic crash that they simply refuse to produce today, even with the current high prices. There are a lot of problems with the investor-driven oil and gas model, but permitting is not one of them; the industry literally got too much done.

In other words, if there’s money to be made, and particularly if you couch it as a national security imperative, permitting problems have a knack for melting away. Ultimately, that is the likely path for renewables: The IRA creates a massive market for the deployment of solar and wind and other innovations, and environmental reviews are unlikely to derail that swiftly moving train. Moreover, the idea that the National Environmental Policy Act will unfairly hold back the green transition is just massively overstated as a problem beyond random anecdotes. Just one out of every 450 NEPA reviews are challenged in court, and federal agencies win at around the same level as they do in other environmental cases.

In the case of a couple of pipelines, it’s true, residents directly affected in disastrously toxic ways have been able to get the legal system to agree that their lives aren’t worth sacrificing to oncoming pipelines. That includes the Mountain Valley Pipeline, a Manchin priority that would deliver 2 billion cubic feet of fracked gas per day from West Virginia to Virginia, equivalent to 25 new coal plants. Appalachian residents bitterly oppose the project, in some cases physically blocking the pipeline’s path.

The permitting reform bill, which we know little about save for a one-page summary courtesy of The Washington Post, could also be called the “complete the Mountain Valley Pipeline” bill. In fact that’s an entire section of the one-pager, which requires immediate action from federal regulators to approve the project and strips future legal jurisdiction away from the Fourth Circuit Court of Appeals—which has consistently blocked the pipeline because of impacts on endangered wildlife, pristine forest, and human health—and shifts it to the D.C. Circuit, which often sides with federal agencies in these matters.

Even this doesn’t assure Mountain Valley’s completion, as it wouldn’t exempt the project from environmental laws. But the venue-shopping for a friendly circuit court should take care of those challenges. And Manchin’s special pleading for Mountain Valley reinforces how permitting isn’t a problem as long as you have powerful friends.

Elsewhere, the one-pager compresses the time allotted to National Environmental Policy Act (NEPA) reviews to between one and two years, streamlines Clean Water Act reviews and certification, coordinates interagency reviews with a project lead, forces the president to set a list of 25 “high-priority” infrastructure projects of all types under various criteria (reducing energy costs, expanding energy trade, and potential for decarbonization), and forces agencies to act quickly on court challenges.

The deal gives Democrats who are disinclined to gut the permitting process some leverage.

All of these things could be done tomorrow with no legislation, and surely would be done (practically every administration talks about faster project approvals) if the resources were made available. “If you want to improve permitting, don’t weaken the laws,” writes Erik Schlenker-Goodrich, executive director of the Western Environmental Law Center. “To move with agility, strengthen agency culture to provide for creative, agile decision-making and provide agency staff resources to act.”

Instead, this bill creates a countdown for permitting reviews that probably cannot be achieved. While there is some funding for NEPA implementation in the IRA, crashing down the timelines would raise the monetary need to a level that isn’t provided. Depending on the language of the permitting reforms, either the timelines will remain exactly the same because of the lack of state capacity, or the timelines will just cut off reviews before they’re adequately completed, force corner-cutting, and heighten the possibility for errors or oversights. That will be exploited, at least at first, by fossil fuel interests. And once that infrastructure is built, it will be supremely difficult to dislodge in future years, weakening the climate benefits by drawing out the green transition timeline.

This is part of what has oil and gas interests pleased with the IRA and its companion. But green groups, which have been enthusiastic about the IRA, aren’t on board with permitting reforms. The Sierra Club, which has fought to shut down coal plants for years, has savaged the deal, as did Earthjustice.

Other than the one-pager, there is no bill text for something that must be done in the short period when Congress returns in September. Schumer wants to attach it to a continuing resolution to fund the government, to jam it down the throats of Democrats who may not agree with permitting deregulation, but who don’t want to see the government shut down.

That’s clever, but also gives Democrats who are disinclined to gut of the permitting process some leverage. If permitting is to be accelerated, it would have to be fully funded, by definition. That should be insisted upon. Or maybe progressives have something else in mind to serve as the price for their vote. Without some concession, there is no need to break environmental laws and threaten communities.

Republicans would presumably be interested in deregulation and could supply enough votes to power this through (it would need 60 votes in the Senate anyway, so Republicans will be critical to the outcome). But as they spent a week holding a temper tantrum over Manchin’s alleged betrayal on the IRA, they may not be in a forgiving mood. Anyway, we know what they want: Last week, Senate Republicans got Manchin to agree to overturn a rule forcing consideration of climate change in NEPA rulemaking. That rule change won’t pass the House on its own, but to get Republican votes for permitting reform, something similar is likely to be the ask.

Progressives generally got rolled in the Build Back Better process, and they were always going to get rolled, because of the need for that final 50th vote from Manchin (and Kyrsten Sinema). The permitting bill’s dynamic is different. It may pass anyway in a bargain between oil industry-backed Democrats and Republicans. But as they weren’t party to the deal, there’s no reason for progressives to participate in that process. And there’s good reason for them to hold out for better terms. The Democratic leadership made the deal, so they can find the votes for it.