food What Is Food?

Food, like climate, like income, like “the environment” raises all the important issues, and it’s as good a tool for grappling with those issues as anything else. If we can’t sustainably and reliably provide ourselves with good food, we’re looking at a future of increasing illness and planetary degradation. 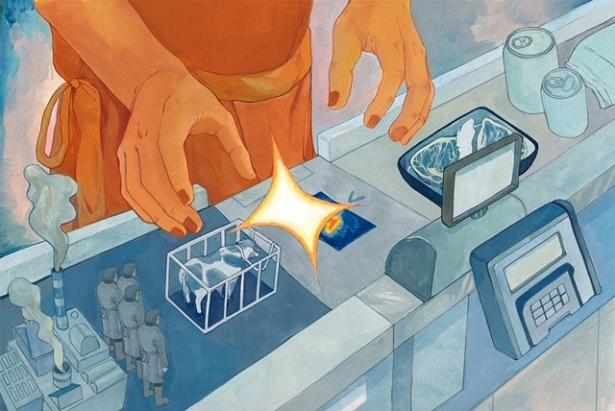 By upgrading the food system, we upgrade society,Paula Jackson Art

An objective newcomer could observe that we’ve decided that agriculture, food processing, and marketing may be run almost entirely with the goal of maximizing profits, with inadequate (and often-ignored) regulation, and almost no guiding principles around their impact on humans, other species, or the earth. After all we, as a nation, could be saying that “nutritious, affordable, and green food is right of all,” and we do not.

By failing to do so, we fail to nourish ourselves. In a way, fixing all of this is as easy as stating a clear intent of what food is for and acting accordingly.

Food is to nourish people. We can elaborate on that, but that’s the fundamental principle. We don’t act as if we believe that.

Of course, “acting accordingly” is not “easy.” It is, however, possible, in ways that it hadn’t been until now. Until recently, hunger, malnutrition, and famine were inevitable; now they are not. Until recently, the true costs of increasing yield at the expense of resource use and health were hidden or undiscovered; now they are obvious. Until recently we did not accurately know which aspects of food promoted health and which promoted disease; now, we actually do. Until recently, many people believed (and still do) that industrial agriculture would “feed the world.” Now we know it won’t, and that it’s playing a role in destroying it.

Until now, many of our food-related problems could be chalked up to ignorance; that’s no longer an excuse. The only excuse is that the reigning version of our political economy allows, even encourages, some portion of humanity to thrive at the expense of others. Quote all the Churchill (“Capitalism is the unequal sharing of blessings...Socialism is the equal sharing of miseries.”) and Thatcher (“There is no alternative.”) you want: Encouraging inequity is a deplorable notion.

You might be saying, “I thought we were talking about food.” We are: Food, like climate, like income, like “the environment” raises all the important issues, and it’s as good a tool for grappling with those issues as anything else. If we can’t sustainably and reliably provide ourselves with good food, we’re looking at a future of increasing illness and planetary degradation. The challenges are great but the costs of not meeting them are inconceivable. Step by step, we must upgrade the food system; in doing so we upgrade society.

This might begin in any number of ways. Since ideas are cheap, it’s best to first consider those that combine meaningful impact with their likelihood of actually happening. I could say “Free, high-quality food for all,” and get laughed off this page. I could scale back: “Let’s end monoculture,” but we’re not in any position to do that or even have that conversation. Even, “Mandate that 20 percent of food be organic,” in an era of Michelob Organic Hard Seltzer and other abominations, is not likely to be super meaningful.

Let me, then, put forward several achievable ideas — all justifiable, and achievable in the very near future (I mean, assuming a reasonable government, not a safe assumption) — that will at least allow us to see and set down on the road to building a food system that is green and just, and all that those two words imply.

Restrict the sale of junk food to children, an idea that was humming along until Ronald Reagan was inaugurated. We could also tax junk food (beginning with soda) and use the income to subsidize fruits and vegetables. Okay, that’s three ideas right there, but they’re related, and they’re all happening in countries both richer and poorer than ours; there are, for example, 28 countries with some form of soda tax; in the US there are eight cities.

Institute real and enforceable regulations governing the raising of animals for food, and enhance transparency on “farms” (they’re really factories) doing so. (Enforcing existing environmental laws would help here as well, as these factories are egregious polluters.) The extent to which animals’ lives are discounted is hidden from most Americans, who would be horrified and ashamed if they saw what happens in large-scale “barns.” Favoring decent treatment for animals is hardly the same as “being vegan.”

Fix tipped wage and other racist and sexist wage laws. Five or more of the worst-paying jobs in the United States are in the food system. Much of this problem is due to New Deal-era laws that were designed to keep women, immigrants, Blacks, and people of color in general in their places. The Federal tipped wage law, for example, allows for a minimum wage of $2.13 per hour for employees who earn more than $30 per month in tips. (Employers are supposed to make up the difference between actual earnings and the “real” minimum wage, but that practice is routinely ignored.) The $15 minimum wage for all would go a long way here, though of course not far enough.

Clean up agriculture’s impact on the environment. As long as the biggest farmers take billions of dollars in aid from the government each year, we—the tax paying public—can justifiably expect them to farm in ways that build soil, protect water and air, and mitigate climate change.

For more than 150 years, the Department of Agriculture — founded to harness the political and economic power that comes with being an agricultural behemoth —has determined that industrialization and commodification, the business of food, would come first. The actual well- being of farmers was a distant and incidental second, and eaters—well, we take what the market gives us. Farming to maximize healthy food for humans was never a goal, any more than minimizing damage to the land and other creatures.