"Terrorism does exist, we know that... How we fight it, in my view, is going to be the great civilizational test of our time. Will we become our enemy or not? Will we become intolerant as our enemy is intolerant, or will we not?” 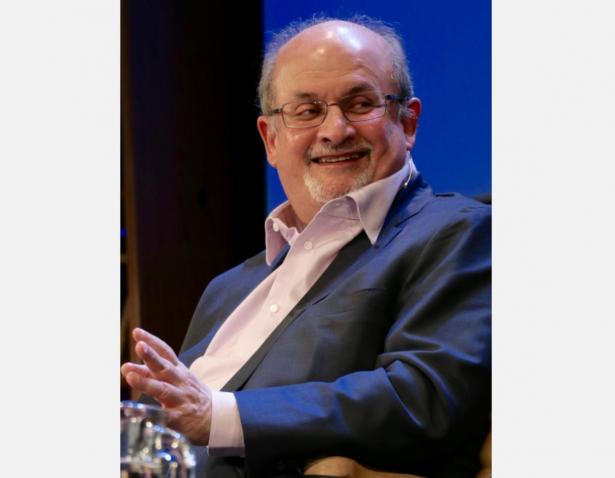 Watch the video of this program here -- moderator

Renowned Indian British novelist Salman Rushdie is in critical condition and faces a long road to recovery after he survived an assassination attempt Friday morning in western New York. Rushdie is one of the most highly acclaimed writers in the world today and has lived underground for many years after facing systematic threats of assassination for his writing. We feature Rushdie in his own words, when he gave a rare speech in 2004 on the freedom of expression at an event hosted by PEN America. “Will we become our enemy or not? Will we become repressive as our enemy is repressive? Will we become intolerant as our enemy is intolerant, or will we not?”

AMY GOODMAN: This is Democracy Now!, democracynow.org. I’m Amy Goodman, as we end the show today with the words of the acclaimed novelist Salman Rushdie, Indian British writer, in critical condition after he survived an assassination attempt on Friday. He was knifed 10 times, at least, as he was about to speak at a literary event at the Chautauqua Institution, when a man wielding a knife climbed on stage and began stabbing him. The attack left him hospitalized with severed nerves in one arm, punctured liver, other injuries that left him on a ventilator overnight. Rushdie’s agent says he’s likely to lose an eye as a result of the assault.

Twenty-four-year-old Hadi Matar of New Jersey was restrained by audience members, arrested, arraigned on Saturday, pled not guilty to charges of attempted murder and assault with a deadly weapon. Prosecutors have not yet established a motive for the attack.

Salman Rushdie is one of the most highly acclaimed writers in world, forced into hiding and lived underground for many years after the late Ayatollah Khomeini of Iran issued a fatwa in 1989 calling on Muslims to assassinate Rushdie over his book The Satanic Verses, the novel portraying the Qur’an in an unconventional light, modeling one of its main characters on the Muslim Prophet Muhammad. The fatwa was finally lifted by the Iran president in 1998.

Salman Rushdie is also former president of PEN America, which supports persecuted writers worldwide. We end today’s show with Salman Rushdie in his own words in a rare speech he gave in 2004 on the freedom of expression at an event hosted by PEN America.

It seems to us, in PEN, to many of us in the last months, that we are not passing this test very well at present, and that there are serious reasons to say that there is a crisis in this country of civil liberties, freedom of speech and human rights, of exactly the kind that PEN has spent over 80 years protesting about when it happens in other countries, exactly the things that — not exactly, because nothing, no parallel is ever exact, but the kind of things that we have tried to highlight, whether it was in Cuba or Burma or Iran or China, those sorts of problems are beginning to crop up here, problems of what it is possible to say without being in trouble, what it is possible to have access to the information media to talk about, the terms in which it is possible to talk about these things when one does have access to the news media, the way in which the government is becoming increasingly intrusive into areas of our lives which the government has no business to go into — what books we read, what shops we go to, what books we borrow from universities, what do we think about. That is — you know, this gets very close to the thought police, and is something which is not acceptable in a free society.

AMY GOODMAN: That’s Salman Rushdie speaking in 2004. He concluded the evening by reading from the works of others.

SALMAN RUSHDIE: And finally, from former president of PEN, Norman Mailer, he sent us the briefest contribution of anybody. Yeah. From John Dos Passos in U.S.A.: “All right then, we are two nations.”

However, I also wanted to read from — from what Norman said in the interview that is in the current issue of the New York magazine, in it, a conversation with his son. And this is how it ends. Norman writes, or says, “Wisdom is ready to reach us from the most unexpected quarters. Here, I quote from a man who became wise a little too late in life:

“’Naturally, the common people don’t want war, but after all, it is the leaders of a country who determine the policy, and it is always a simple matter to drag the people along, whether it is a democracy, or a fascist dictatorship, or a parliament, or a communist dictatorship. Voice or no voice, the people can always be brought to the bidding of the leaders. This is easy. All you have to do is tell them that they are being attacked, and denounce the pacifists for lack of patriotism and exposing the country to danger. It works the same in every country.’

“That was Hermann Goering speaking at the Nuremberg trials after World War II. It is one thing to be forewarned. Will we ever be forearmed?” Thank you.

AMY GOODMAN: That’s renowned Indian British author Salman Rushdie, speaking in 2004 at a PEN America Center event at Cooper Union in New York. On Friday, he was stabbed at least 10 times. He is now in critical condition after that assassination attempt. That does it for our show. I’m Amy Goodman. Stay safe.

The original content of this program is licensed under a Creative Commons Attribution-Noncommercial-No Derivative Works 3.0 United States License. Please attribute legal copies of this work to democracynow.org. Some of the work(s) that this program incorporates, however, may be separately licensed. For further information or additional permissions, contact us.