Stealing its central bank reserves is not going to do anything except starve innocent civilians. 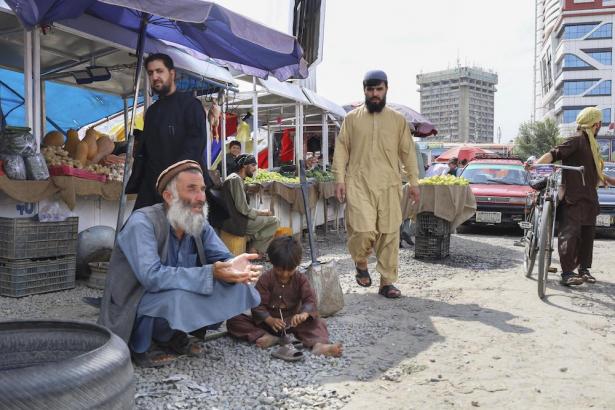 A man and a child sitting on the ground beg in Kabul, Afghanistan, August 14, 2022.,Kyodo via AP Images

The Biden administration announced Monday that it would not release any of the $7 billion in Afghanistan’s central bank reserves that are currently in U.S. possession, and pulled out of talks with the Taliban. The reported reason was that the recent assassination of al-Qaeda leader Ayman al-Zawahiri in Kabul revealed that he was living near a house owned by Taliban interior minister Sirajuddin Haqqani. It seems the administration’s intention is to inflict collective economic punishment for at least some Taliban leaders having allowed al-Zawahiri to live in Kabul.

Previously, the administration had suggested that half the money could be used to stabilize the country’s collapsed economy. Yesterday’s announcement was therefore disastrous news for ordinary Afghans, who are facing mass unemployment, drought, high inflation, and food shortages if not outright starvation by the millions. According to a recent report, fully 97 percent of the country’s population is now in poverty. Families are selling their children for food.

Biden’s decision is both foolish and barbaric. It will accomplish nothing in the fight against terrorism, and cause certain terrible suffering. If he had any sense, he’d take quiet steps to allow Afghanistan a measure of economic recovery.

Now, it is certainly plausible to suppose that al-Zawahiri was being sheltered or at least tolerated by Haqqani. But the administration has presented no proof of this, nor that the broader Taliban leadership knew about his presence. Haqqani was taking a terrible risk, and it’s not hard to imagine other Taliban elites being very annoyed at him over this.

Moreover, and initial media reports to the contrary, it is widely accepted that the increasingly elderly and infirm al-Zawahiri had been de facto retired, and the al-Qaeda organization he led has been largely moribund for years. The real energy in extremist terrorism since 2014 has been concentrated in the Islamic State and its affiliates. The Taliban have been fighting the (truly psychotic) “Khorasan” branch of IS since 2015. Indeed, one of the major threats to Taliban rule has been their inability thus far to suppress routine IS-K bombings of schools, hospitals, and mosques.

By the same token, there is little chance that permanently cutting off the Taliban from Afghanistan’s central bank funds will cause them to reconsider harboring other al-Qaeda figures, should they feel like doing so. If holding its central bank reserves hostage didn’t do it, then permanently stealing them surely won’t either. Now the Taliban have nothing to lose, aside from the threat of military force—unlikely, given recent history.

Meanwhile, the Biden administration just proved that it has far more specific tools available should it want to continue hunting down al-Qaeda figures—namely, drone strikes. It’s not what I would do, but at least the associated damage to civilians is many orders of magnitude less than a famine. (To be fair to Biden, he has drastically cut back the rate of drone strikes compared to both his predecessors—the one that got al-Zawahiri was the first in Afghanistan since U.S. troops departed a year ago.)

There are far more effective weapons to fight terrorism than starving 40 million people.

To be sure, if the administration did provide funding to Afghanistan, it would face some legal constraints. As Scott R. Anderson explains at Lawfare, there are numerous default judgments against the Taliban in U.S. courts, so if Biden were to recognize them as the legitimate government of Afghanistan, the assets would be seized by the courts (which is part of why the administration set them in a special account in the first place). But at least Biden could use the $3.5 billion for some kind of economic stabilization, as it previously suggested. And fundamentally, if the president were determined to get Afghanistan sufficient resources to jump-start its economy, he could surely do so.

As is, yesterday’s decision means American policy is working at cross-purposes. Other parts of the Biden administration are helping coordinate a vast humanitarian relief effort that has so far avoided a full-blown famine, though only barely. What Afghanistan needs is enough currency reserves and a relaxation of sanctions to allow its collapsed banking system to recover and something like normal economic life to resume. Until the economy is stabilized, it will be necessary to keep aid flowing indefinitely—and who knows what would happen if a Republican wins in 2024?

If the last 20 years have proved anything, it’s the limits of American power when it comes to influencing what happens in Afghanistan. The Taliban may or may not listen to reason when it comes to harboring terrorists. But there are far more effective weapons to fight terrorism than starving 40 million people.

Ryan Cooper is the Prospect’s managing editor, and author of ‘How Are You Going to Pay for That?: Smart Answers to the Dumbest Question in Politics.’ He was previously a national correspondent for The Week.