Defense for Children International - Palestine director Khaled Quzmar tells Mondoweiss the message is clear: “We are under imminent risk now.” 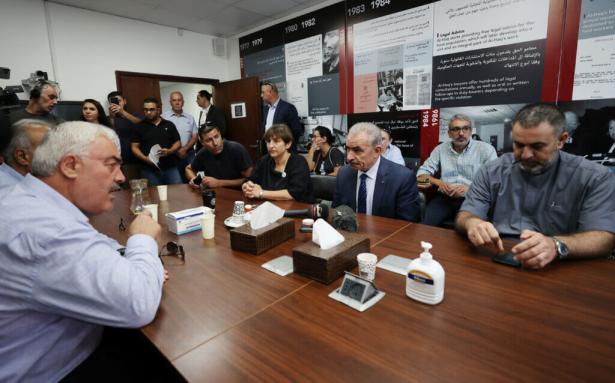 The Israeli army raided the offices of seven Palestinian civil society organizations in the occupied West Bank overnight on Thursday, confiscating and damaging items belonging to the organizations, and sealing off their offices.

Six of the seven organizations were designated as “terrorist institutions” by the Israeli government in October 2021, and were subsequently outlawed by the Israeli military commander in the occupied West Bank.

The seventh organization to be closed today along with the original six is the Union of Health Work Committees (UHWC). (Editor’s note: not all of the organizations were aware of the closure of the Health Committee, and so their original public statements about the closures have referred to only six organizations).

The groups released statements via their social media channels saying that their offices were raided beginning at around 3:00 am on Thursday morning, and that armed Israeli soldiers confiscated and destroyed materials belonging to the organizations.

“At around 5:30 this morning I received a call from our neighbors telling me that our offices were being raided,” Khaled Quzmar, General Director of DCIP told Mondoweiss.

“I arrived to find more than a hundred soldiers surrounding the office,” he said, adding that the soldiers were “shooting tear gas everywhere,” and prevented anyone from approaching the office.

He added that he also saw Israeli soldiers loading the office’s equipment onto a truck, though he could not confirm exactly what was taken, as the doors to the DCIP office were welded shut.

Videos released by the Quds News Network and shared by the Union of Palestinian Women’s Committees on Twitter also showed Israeli forces loading equipment and materials belonging to the organization, onto a large flatbed truck.

In an statement describing the raid, Al Haq outlined the damage to their offices at length:

“At 3:23 am, Israeli Occupying Forces (IOF) forcibly blasted through the locked security door of Al-Haq’s offices, bursting the door from its hinges and raiding the premises, setting off the alarms. Below the premises of Al-Haq, the IOF bludgeoned and broke the front door of the Episcopal Church, leaving long shards of exposed broken glass, sponge-grenades, and several teargas canisters, rubber coated and live bullets around the property. Armed military forces broke into Al-Haq, systematically raiding each room and blasting the hinges off the locked doors of the finance department, the administrative office, the General Director’s office, and the main server room, causing material damage. The military rummaged through files, scattered and displaced accounting folders to the ground, knocked over coffee cups leaving spillages, and trashed offices, and trashed and bathrooms.”

In Al-Haq’s meeting room, raiding soldiers tore an Irish flag to the ground, which had been symbolically placed in recognition of the Occupied Territories Bill, prohibiting the import of settlement goods and services. In addition, the IOF tore down large maps of 1948 Palestine, maps which depict an unfragmented Palestine, free from the tyranny of settler colonialism and apartheid and the infliction of international crimes. The IOF also removed from the wall at reception, the framed certificate of the prestigious Geuzenpenning Prize for Human Rights Defenders, awarded to Al-Haq in 2010, for Al-Haq’s commitment and excellence in documenting and monitoring Israel’s widespread and systematic violations of human rights against the Palestinian people.

The doors of all seven organizations were welded shut or sealed with a large iron plate – a common practice used by Israeli forces in the occupied territory against offices, businesses, and even homes.

“These military orders were left taped to our doors after the military raid on our offices. They declare Addameer forcibly closed in the name of ‘security in the region, & to combat the infrastructure of terrorism’,” Addameer said on Twitter.  “This is an astonishing attack on our needed human rights work,” the group added.

Organizations vow to continue their work

In a joint press conference on Thursday afternoon, the organizations condemned the raids and the attack on their organizations, saying Israel was “a racist, apartheid, and colonial state.”

Speaking to reporters, Jabarin said: “We will continue to defend the rights of our people, despite any decision from [Benny] Gantz,” referring to the Israeli Defense Minister who has led the effort to criminalize the organizations.

Jabarin said that the groups would not acquiesce to Israeli pressure, and that they “will continue our work with the International Criminal Court. These decisions mean nothing to us, and we will continue on with our work in compliance with Palestinian law,” he said.

“They can arrest us, kill us, and beat us, but they will not deter our resolve in achieving justice for our people, and defending the rights of our people,” Jabarin said.

Since the designation the Israeli government has failed to provide public evidence supporting its claims, while classified documents have revealed the dubious nature of the state’s accusations.

In July nine EU states announced that they would continue to support and fund the groups in light of “no substantial information” provided by the Israeli government to back up its claims.

The UN Human Rights Office released a statement saying it was “alarmed at Israel’s arbitrary closure” of the organizations, and called on Israel to immediately reverse the decision and revoke the designation of the organizations as “terrorist” and “unlawful”.

“Despite offers to do so, Israeli authorities have not presented to the United Nations any credible evidence to justify these declarations. Several Member States have also stated that the evidence shared with them does not justify the designations,” the statement said.

“As such, the closures appear totally arbitrary. The shutting down of the organizations represents the latest in a series of attacks that are further drastically shrinking space for human rights and humanitarian work in the occupied Palestinian territory, affecting all institutions working on human rights, including the UN Human Rights Office. Human rights defenders must be immediately protected from these unjustified attacks.”

Palestinian Prime Minister Mohammed Shtayyeh met with the directors of the organizations on Thursday and reaffirmed the Palestinian Authority’s support for their work.

Speaking inside the offices of Al-Haq in Ramallah, Shtayyeh said: “Despite the occupation’s closure of their doors, the six [sic] institutions will continue to work, because they are all registered with the State of Palestine, and they are legitimate legal institutions that operate within the framework of the law.”

Shtayyeh went on to say that Israel was attacking the institutions, particularly Al-Haq, for the role they have played in providing evidence to the ICC in its investigation of Israeli crimes and human rights violations in the occupied Palestinian territory.

He also criticized the lack of response from the international community to Israel’s criminalization of the organizations, saying “we must not surrender to this occupation and its procedures.”

DCIP’s Khaled Quzmar urged the EU to take “decisive action” against Israel for its attacks on the groups.

“These raids were a message [from Israel] to the EU that ‘you decided to support these groups, but we are doing what we want’. It’s time for the EU to take complete action to show Israel that this will escalate into a conflict between Israel and the EU if Israel continues with these policies against us,” he said. 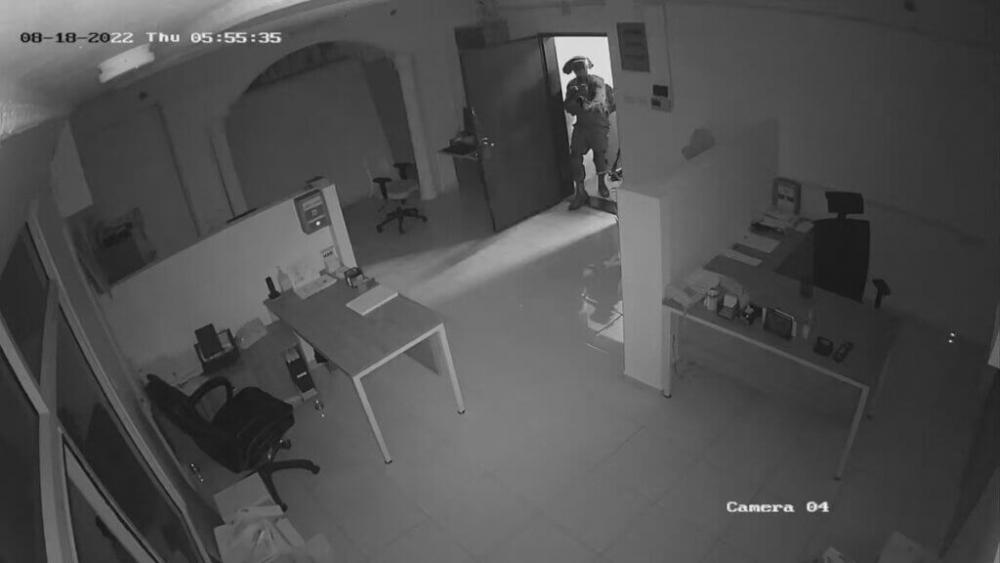 ‘We are under imminent risk now’

Adalah – The Legal Center for Arab Minority Rights in Israel, which represents the six original organizations, said in a statement: “After 10 European states rejected Israel’s declarations of the groups as ‘terrorist organizations,’ pronounced in the absence of any evidence, Israel continues to persecute Palestinian human rights and civil society groups with the clear aim of silencing any criticism against it.”

“The effort is led by a Defense Minister, Benny Gantz, suspected of committing war crimes, in an attempt to terrorize those who will testify against him and his actions,” Adalah said, highlighting the fact that the groups’ appeals were rejected without any opportunity to defend themselves against the alleged “secret evidence” against them held by the Israeli government.

“This attack on Palestinian civil society is an attack on the entire Palestinian people and their right to self-determination. Standing aside or staying silent constitutes active cooperation with the persecution and oppression of human rights defenders,” Adalah said.

Following the raids on Thursday, the organizations expressed concerns that because their organizations are now deemed unlawful by the military commander, their staff could be under imminent threat of arrest and military prosecution if they continue their work – something the groups have been warning could happen for months.

Quzmar told Mondoweiss that he, along with the directors of all the organizations, received calls from Israeli intelligence officials on Thursday morning following the closure of their offices. The director of the Union of Palestinian Women’s Committees was the only one to answer the call, Quzmar said.

“She was called in for a ‘meeting’ with the intelligence officers. When she went they warned her not to go back into the office or she’ll be arrested,” he said.

“The message was clear: the military commander’s decision is final, and we are considered illegal. Going back to work and re-opening our offices will be a violation of an Israeli military order, and we will be subject to military prosecution.”

Quzmar added that in Israeli military court, which boasts a 99% conviction rate against Palestinians, the punishment for violating such military orders could carry up to five years in prison, perhaps even more.

“We are under imminent risk now,” he said.

This movement needs a newsroom that can cover all of Palestine and the global Palestinian freedom movement.

The Israeli government and its economic, cultural, and political backers here in the U.S. have made a decades-long investment in silencing and delegitimizing Palestinian voices.

We’re building a powerful challenge to those mainstream norms, and proving that listening to Palestinians is essential for moving the needle.

Become a donor today and support our critical work.