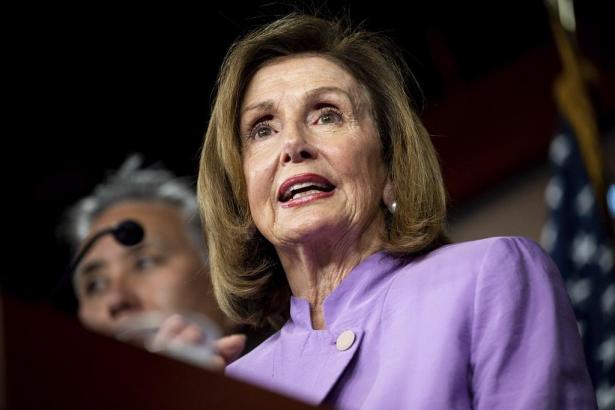 As Democrats barreled toward a surprisingly productive legislative session in July, House leadership quietly killed a vote on whether to expand Social Security.

Social Security 2100, the first expansion to the New Deal program in 50 years, would increase all checks by about 2 percent of the average benefit, offset through a payroll tax on wages above $400,000. The bill, long championed by Rep. John Larson (D-CT) and introduced with nearly 200 co-sponsors, was set for a markup by the Ways and Means Committee in late July, before House Speaker Nancy Pelosi’s office axed it.

In an interview, Larson said that the bill faced opposition from Wendell Primus, Pelosi’s lead staffer on a variety of domestic policy issues. Pelosi was focused on passing the Inflation Reduction Act, he added, and cited concerns over the bill from Democrat frontliners, the representatives most vulnerable to a challenge in November elections. “Nancy Pelosi said, ‘Just keep working the bill,’” Larson said. “And that’s what we’ve continued to do.”

But the bill already has the support of a majority of Democratic frontliners, such as Sanford Bishop (D-GA) and Matt Cartwright (D-PA), who represents a district Trump won by several points. It is the culmination of a two-decade push to move from a defensive to offensive position on Social Security—not only protecting the program from Republican threats of privatization, but adding to it. Even President Joe Biden has called to expand the program, leaving Pelosi as the key holdout.

While the bill faced long odds against a Senate filibuster, it could have been a powerful counterweight against Republicans who have lately been letting slip their beliefs that Social Security was “set up improperly” and that it should be subject to annual budget appropriations rather than remain as a mandatory benefit. Indeed, in a statement, Pelosi spokesperson Henry Connelly said, “There is absolutely no question of Democrats’ commitment to the strength of Social Security and Medicare, nor sadly is there any doubt about extreme MAGA Republicans’ commitment to destroying these vital pillars of financial security for our seniors, with House and Senate Republicans constantly calling for them to be slashed or even terminated.”

But without the vote on expansion, Democrats can’t make as strong a case about their commitment to the program. More confoundingly, at the same time as Social Security expansion is being sunk, Democrats are set to move ahead, after Congress returns from recess, with a retirement reform bill that creates new tax breaks for top earners, benefitting asset managers and retirement-plan service providers.

SUPPORTERS OF SOCIAL SECURITY 2100, which was first introduced in 2019, finally received word in late July that Speaker Pelosi would move it to the House Ways and Means Committee for a markup. On Wednesday, July 20, Larson gathered members of Congress to give speeches of support. Several said they planned on a markup the following week.

“John, you understand better than most the impact of this program, and to just, consistently year in and year out, get this on the radar screen, and now we’re going to have a markup next week on this,” Rep. Tim Ryan (D-OH), now running in a competitive Senate race in a red state, said at the session.

But the following Monday, instead of getting a formal notice of the markup, House Majority Leader Rep. Steny Hoyer (D-MD), joined by Pelosi staff, informed Larson that it wouldn’t happen. That might be the end of it for this session.

There have been false starts for Social Security reform before. Every time the expansion coalition seems close to a breakthrough, Primus, Pelosi’s brain on policy matters and a longtime, strident expansion opponent, stands in the way. Primus’s philosophy is in line with an older generation’s belief that Democrats should fight only to maintain the last scraps of the social safety net rather than do anything that might broaden it.

“Wendell’s argument to groups has been, listen, there are only a limited amount of resources, etc., and we have to make difficult decisions at times,” Larson told the Prospect in an interview. “There’s more than a shred of truth to the fact that children are in great need, but there certainly is an equally strong argument that both are in need.”

Larson pointed out that Social Security is one of the top programs responsible for reducing childhood poverty—second only to the Child Tax Credit. Rep. Ro Khanna (D-CA), a co-sponsor of the legislation, said that it is urgent to pass Social Security 2100 in order to draw a contrast with Republicans.

“Someone should tell Wendell that if he really wants to exert this kind of leadership, he ought to try to run for Congress, or at least get elected dogcatcher first,” Khanna told the Prospect.

As Larson’s bill was being sidelined, another Social Security bill, sponsored by Republican Rep. Rodney Davis (R-IL), earned enough bipartisan support to bypass markup and be fast-tracked for a vote. Davis’s bill, the Social Security Fairness Act, would repeal the Windfall Elimination Provision (WEP) and the Government Pension Offset (GPO), which prevent public servants in states with special pension plans from getting Social Security benefits. Repealing WEP and GPO is widely supported by public-sector unions, including teachers and policemen.

Under House rules adopted in 2019, House leadership could not block a bill with over 290 co-sponsors for 25 legislative days from coming to the floor. Anticipating that, Pelosi’s office attempted to craft a procedural rule that would have made Davis’s bill ineligible this session, said two sources familiar with the maneuver. The rule would have stipulated that pro forma days did not count as “days in session” for the Consensus Calendar. This would have pushed the Davis bill out at least after the elections, since there aren’t many legislative days left. But the maneuver failed, and Davis’s bill, which is currently on the Consensus Calendar, could come up for a vote next month.

Aside from potentially providing Republicans a bipartisan and popular win on Social Security prior to November, there are substantive concerns with Davis’s bill. It is not paid for, so the addition of public-sector pensioners could cost the Social Security Trust Fund as much as $147 billion, according to Larson. Ironically, he said, that could over time decrease benefits across the board for Social Security recipients.

SOCIAL SECURITY IS THE MAIN SOURCE of retirement income for most Americans. About one-quarter of elderly Americans live in households that rely on Social Security benefits for at least 90 percent of their income. Roughly half of all Americans have no retirement account at all. Yet, as the House punts legislation that would fund the public component of the U.S. retirement system, Congress is quietly allowing top earners to park more tax-shielded cash in private retirement funds.

In May, the House passed the “SECURE Act 2.0,” a bill led by House Ways and Means Committee Chair Richard Neal. The legislation expands tax breaks made in his earlier bill, the SECURE Act of 2019, with a few additional elements. The Senate version, the Enhancing American Retirement Now (EARN) Act, is likely to move in the lame-duck session.

Neal promotes the legislation as a response to the “retirement crisis,” an effort to address the racial wealth gap, and a timely effort to improve economic resiliency in the wake of the pandemic. And on its face, SECURE Act 2.0 is a relatively innocuous revision to retirement law, expanding automatic enrollment in 401(k) plans and easing restrictions on money that can be stocked there.

But only the richest earners would actually make use of Neal’s reform. SECURE Act 2.0 raises contribution limits to tax-shielded retirement accounts, but most workers are nowhere near hitting those limits. Last year, the annual limit to contribute to a 401(k) was $22,000. A majority of employees making above $150,000 per year were putting that much into savings, while just 2 percent of people making the median American income were putting away the maximum contribution, according to an analysis by economists at Bloomberg Intelligence, a business analytics service.

In addition to raising contribution limits, the bill also raises the age at which federal law requires savers to take a distribution from their accounts, from 72 to 75. (The first SECURE Act just raised it to 72 in 2019.) A provision in the Senate version allows retirement savings to be more easily put into long-term care insurance, by eliminating the penalty fee for withdrawing funds for that purpose. Long-term care, which is unaffordable to the average American, is often sold by the same advisers who manage retirement plans, and this would give them an additional sales pitch.

The contribution limits would steer more money toward asset managers like Fidelity and BlackRock. The Bloomberg analysis calls this nothing less than a “big bang” for mutual funds, which should anticipate a “decades-long boost” in assets under management and higher fee-based revenue. (A single household can pay as much as $277,969 in retirement account fees over a 40-year span, according to calculations by the progressive think tank Demos.)

Advocacy groups for mutual funds, including the Investment Company Institute and the National Association of Plan Advisors, have praised the act. Many of these groups are longtime significant donors to Neal’s campaigns.

The bill continues a long trend detailed by University of Virginia law professor Michael Doran, who served in the Clinton and Bush Treasury Departments, in a recent paper, “The Great American Retirement Fraud.”

Tax breaks for the richest retirees also mean considerable revenue loss for the federal government. Annual revenue loss from retirement plans in 1996 was about $145 billion in 2020 dollars, according to Doran’s calculations. This year, it is just under $380 billion.

“This is deeply cynical legislation,” said Daniel Hemel, a law professor at New York University. “It’s an attempt to give just enough to low- and middle-income savers that members of Congress can point to some retirement improvement, while also lavishing benefits on the donor class, and then layering on budgetary gimmicks to hide the cost.”