ICE Prison in South Georgia Should Be Shut Down, Not Expanded

The facility has a history of human rights violations that compromise the safety, health, and rights of detained people 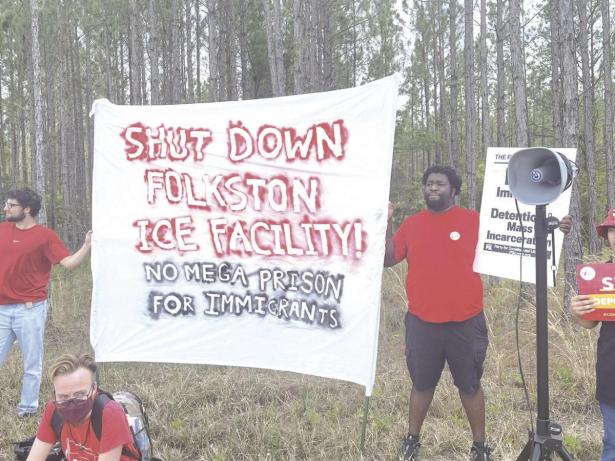 Neal, a Jamaican citizen who owned and operated a yacht servicing company for 25 years in South Florida, spent 17 months in a prison that’s been converted into a detention center for immigrants in Georgia. Speaking to us of his experience at the Folkston ICE Processing Center, Neal described a prison that lacks basic safety and care for the people detained there and overall conditions that reveal a jarring lack of regard for human life.

“That place is not for safety or for human beings—it is just for money,” said Neal, who wishes to be identified by his first name only. “I thought this government was going to close down all of those private ICE prisons. Politicians say anything when they want votes.”

On June 30, a government investigation of Folkston identified numerous violations that “compromised the health, safety, and rights” of detained immigrants. The detention center has a history of mistreating detained people in violation of ICE’s own standards. In April 2020, Folkston was the subject of a lawsuit filed by medically vulnerable individuals detained at the prison, and ICE prisons run by the GEO Group have been exposed for having deplorable conditions and a history of egregious human rights violations.

Neal, who is over 60 years old and has diabetes and high blood pressure, survived numerous health and safety hazards at Folkston both before and during the pandemic, including abusive guards, severe understaffing, medical neglect, squalid and dangerous living conditions, and spoiled food that gave him food poisoning. Adherence to COVID-19 protocols was inconsistent at best and nonexistent at worst, resulting in a high number of cases within the prison. Neal witnessed numerous instances in which immigrants detained at Folkston who were having a life-threatening medical or mental health emergency were denied necessary care. In one instance, a diabetic man went so long without receiving food that he fell into a diabetic coma. In another, guards ignored numerous reports that a detained immigrant was suicidal. When the man later attempted suicide, he was placed in solitary confinement.

While at Folkston, Neal was prevented from having confidential meetings with his lawyer and was charged extortionary prices for basic essentials, such as hygiene products. Deprived of these necessary goods and sufficient edible meals, detained immigrants were forced to work for as little as $2.50 a day in dangerous, unsanitary conditions in order to sustain themselves. Black, Asian, and Latinx immigrants were treated especially poorly because of language barriers and racism.

“The racism happens there every day, every day,” Neal said. “Nothing is going to change there, nothing. The only way it will change is if it closes down.”

Neal’s account is consistent with what we have known for years as legal advocates for individuals detained at Folkston. In addition to the instances Neal described, we know of multiple people who became severely ill or suffered permanent, debilitating injuries at Folkston because of unsafe living conditions or delays in emergency medical treatment. Rather than aberrations, lengthy delays in receiving needed medical and mental health services at Folkston are the norm, and the services that are provided are generally sub-par. The Department of Homeland Security’s Office of the Inspector General concluded in a June 30 report that Folkston facilities were “unsanitary and dilapidated” and that the facility “did not meet standards for facility conditions, medical care, grievances, segregation, staff [communication with detained people], and handling of [detained people’s] property.”

Originally opened as a state prison in 1998, Folkston was repurposed as a detention center for immigrants in 2017 under an intergovernmental service agreement between Charlton County and ICE. The GEO Group, the private prison corporation that operates Folkston, is engaged in preparations to increase the facility’s capacity by 1,800 beds. Adding to over 1,100 beds already in use, the expansion would make Folkston the largest ICE detention center in the country. On the heels of the Biden administration ending the ICE contract with the Irwin County Detention Center, expanding a different Georgia detention center to detain asylum-seekers and migrants in civil immigration proceedings with a similar pattern of human rights abuses defies basic standards of logic and decency.

Folkston has been far from the economic boon touted by local officials. To the contrary, poverty levels in Charlton County have increased slightly since the facility was repurposed as a detention center and began devastating the lives of detained people and their families. Notwithstanding these circumstances, county officials and business owners have expressed concerns that closing the detention center would harm the local economy.

Neal, who was a business owner himself, thinks these concerns are misguided.

“I understand that the ICE prison is the biggest means of work for the community, but I don’t think it should be that way within the sense of having people in detention, punishment, not feeding them properly, no proper medical facility. [The private prison corporation] do[esn’t] have any interest in caring for [detained immigrants], they have interest in putting money in their pocket. Our lives are in danger, every day, all the time.”

The interconnection between prison economies, rural poverty, and public health is exemplified by the situation in Charlton County, where a quarter of the population lives in poverty. In 2013, the Charlton County hospital closed due to “financial instability,” resulting in both economic and health consequences for residents. Compounding the effects of the absence of a local hospital, deplorable conditions at Folkston likely contributed to high COVID-19 rates outside of the prison; in July 2021, Charlton County had the highest rates of new COVID-19 infection in the nation. Many community members, friends, and family of people we care about lost their lives.

More than 20 years of private prison administration in the area have not delivered the economic investment the local community critically needs. Charlton County currently has the fourth lowest income rate in Georgia and the 11th lowest in the country. Instead of going toward a private prison, the $22.8 million in federal funds currently enriching the GEO Group should not be ICE’s to distribute but should go toward projects that actually serve the local community. The Biden administration must cease the expansion of the predatory private prison economy that exists to serve corporations’ bottom lines and instead prioritize the lives of immigrants and rural communities.

Expanding Folkston is part of a larger emerging pattern of detention expansion. Rather than fulfilling campaign promises by fully halting the incarceration of people in such prisons, the Biden administration has simply converted those prisons into immigration detention spaces. The Folkston expansion plans ignore reports of abuse and inhumane conditions, contradicting DHS Secretary Alejandro Mayorkas’ policy statement on health and safety standards. The Biden administration must correct course; it must work quickly to combat the bloated and corrupt detention system it has helped to expand.

President Joe Biden promised on the campaign trail to end the federal use of private prisons and further issued an executive order announcing a federal policy of eliminating the use of privately operated prisons. Instead, the administration is allowing the expansion of their use, which has resulted in a drastic increase in the number of detained people. Although Biden’s proposed reduction in the capacity of immigration jails is a step in the right direction, profit-based incentives to incarcerate must be fully eliminated.

Prison companies are getting around the executive order by rerouting business into the detention industry, and they are using local governments and corporate restructuring to do so.

If the Biden administration truly aims to end private profiteering, the detention industry cannot continue expanding. We must not allow the GEO Group, which is currently being investigated, to be rewarded with a lucrative contract in defiance of federal policy and human rights.

Azadeh Shahshahani is Legal & Advocacy Director at Project South and a past president of the National Lawyers Guild; she tweets @ashahshahani.

Prism is an independent and nonprofit news outlet led by journalists of color. We report from the ground up and at the intersections of injustice. Together, our journalists go where justice requires.

Activists, thought leaders, decision-makers, and all those who believe in justice for all come to Prism for deep reporting and honest insights on the most pressing injustices of our time—delivered through the lens of those who are most impacted.