The Boric government can recover from the lopsided rejection of Chile’s new Constitution by harnessing the energy behind the country’s reform movement. 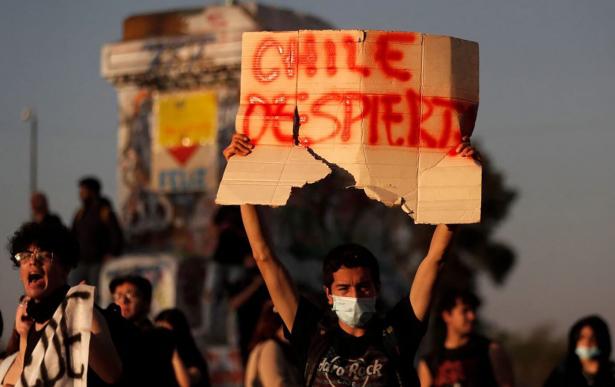 A Santiago protester holds up a placard reading “Wake Up Chile” on September 5, the day after Chilean voters overwhelmingly rejected the country's new Constitution in a referendum vote.,Javier Torres / AFP

There should be a rule in politics that if you have trouble explaining something, you can’t build a movement around it.

Chile’s new draft Constitution—defeated in a resounding referendum vote in early September—had 388 articles and was the size of a small paperback. It enshrined 100 kinds of rights—including things like free legal advice and Internet access. It was drafted by a sometimes raucous group of elected representatives, many of whom had strong opinions on one issue or another but otherwise shared little in the way of political experience. And yes, there was the delegate who faked a serious illness to get elected; and another who took off her shirt to address the convention.

Sorry; there’s more. A group of people participating in an official pro-Constitution rally performed a simulated a sex act—using a flagpole that displayed the Chilean flag.

The process was so very easy to caricature. And Chile’s right-wing press had a field day doing so. The new Constitution’s opponents, led by the right but including some centrist leaders, railed against the creation of a “plurinational state” with independent court systems for multiple ethnic groups. A poll of Mapuche voters—members of the country’s largest ethnic group—showed that only 12 percent favored the creation of a plurinational state, and a large majority distrusted the process.

Supporters of the Constitution were unable to point to a coherent, unifying vision around which a consensus could form. In the end, proponents were forced to argue that they would push through a series of improvements to the complex document—provided voters approved it first.

Supporters of the Constitution were unable to point to a coherent, unifying vision around which a consensus could form. In the end, proponents were forced to argue that they would push through a series of improvements to the complex document—provided voters approved it first.

That was hard to explain. Voters didn’t buy it, voting it down by a resounding 24-point margin in a referendum held last Sunday.

The defeat was overwhelming and humiliating, especially for the new leftist president, Gabriel Boric. Rejection varied little across age, class, and income lines. Not a single major city or region voted in favor.

Yet there is still plenty of room for optimism in the referendum’s aftermath. The country’s rightist leaders, better organized and financed and benefiting from Chile’s monolithically conservative press, tried to frame the rejection as a political victory. But they are wrong. There remains a mass movement for change in Chile, and over coming weeks it will likely coalesce around a second, more orderly, attempt to save the heart of the recently rejected Constitution.

The new Constitution promised to be perhaps the most progressive national charter ever drafted. I read most of it, and found it an inspiring document, although not an easy read. Chief among its merits was purging Chile’s political system of the previous Constitution, imposed by the dictatorship of Gen. Augusto Pinochet in 1980. The crux of that document—drafted in consultation with Milton Friedman and a group of hard-right libertarian economists from the United States—was the concept of the “subsidiary state”: the idea that economic forces must be allowed to work free of government regulation, except where there was no other alternative. The practical impact of this model was to keep democratic elections at bay by a system of designated senators and special oversight boards. The military was not subject to civilian control—an arrangement that was more than semi-fascist. You might say Chile was the country where Milton Friedman fell in love with Francisco Franco.

Amendments more than a decade ago changed some of the most draconian aspects of the Pinochet Constitution, but its economic vision and regulatory regime remained in thrall to the dogmas of neoliberalism.

The heart of the new Constitution greatly strengthens the obligations of the state to enhance labor, gender and consumer rights and to renovate the underfunded public educational system—all measures that sparked little public opposition in the run-up to the referendum vote. Women are guaranteed “at least” half of all positions in state institutions. Reversing the order of the neoliberal regime, the Constitution strongly protects private property, while defining it as a social good in an ecological context. It’s worth quoting:

Every person, natural or juridical, has the right of property in all its species and over all kinds of goods. Exceptions are those goods that nature has made common to all persons and that the Constitution or the law declares cannot be appropriated, such as water or air.

The law shall determine the manner of acquiring property, its content, limits and duties, in accordance with its social and ecological function.

Despite the claims of the rightist opposition, the Constitution is not a socialist document—far from it. Its economic and monetary provisions didn’t spur controversy, and indeed, won the all-clear from business publications such as Bloomberg News. But putting the environment on the same plane as the economy is a radical idea—as well as a timely response to accelerating climate change.

Water rights, for example, are currently a market commodity sold to the highest bidder. The massive Aconcagua River, whose headwaters are in the pristine glaciers descending from the 20,000 feet summit of Mount Juncal, is badly depleted by the corporate-owned avocado plantations and mining companies in its watershed. The river is now dried up before it reaches the Pacific Ocean, less than 100 miles away.

Yes, it is hard to explain in a pithy slogan or sound bite why the Constitution seeks to reflect a broad consensus around women’s and Indigenous rights, while also leveraging massive support for consumer and environmental protections. And that’s a big reason why the cacophony of opposition on many fronts—including campaigns of disinformation—led to the massive rejection of these guarantees.

The failure has been laid at the feet of the inexperienced young politicians in the Boric government, and the 36-year-old leader did not shrink from taking responsibility. The outcome was “humbling” he said—and in the immediate wake of the referendum’s defeat, he reorganized his government and jump-started an initiative to pull together a new and simpler document.

Humility was not a sentiment shared by other leftist leaders associated with the failed convention. “Thanks to the Chileans for scorning their own country,” wrote one former delegate on Twitter.

Diego Ibañez, the spokesperson for Boric’s party Convergencia Social, said scolding people for not “thinking like us” is absolutely the wrong reaction.

“I think there is punishment for arrogance,” he said. “I believe the Approve side ended up not building a vision for a possible Chile, which would offer greater security for citizens to choose change. It was not enough to list a catalog of social rights, instead of communicating to the citizens, in their own language, a different philosophy [of government] that they could trust. We failed in that, and we have to be honest about saying that, in order to get back up and continue this process.”

The painful relaunching of the constitutional process began this week, with negotiations in Congress and new, more experienced faces in Boric’s cabinet. The president fired his interior minister, a close friend, and demoted his top political adviser, former student leader Giorgio Jackson, who had led the government’s pro-Approve campaign.

Their replacements are both seasoned politicians who had served with President Michele Bachelet, the establishment left’s most beloved leader. The top cabinet spot went to Carolina Toha, also a successful former mayor of Santiago municipality, which includes the center of the sprawling city. The key secretary of the presidency position was assigned to Ana Lya Uriarte, who on her first day persuaded rightist leaders to step back from an announced boycott of the negotiations for a rewritten Constitution.

The groundwork for success going forward hinges on an uncomplicated political equation. An enormous majority—almost 80 percent—supported the 2020 plebiscite rejecting the Pinochet Constitution and setting in motion the constitutional convention. The movement to change Chile’s governing system was powered by a series of massive popular protests starting in October 2019. That movement put more than a million people in the streets in one rally—an event echoed last week when the pro-Approve forces staged a peaceful, music filled demonstration with a crowd estimated at well over 100,000 people.

The core elements of this movement for change seem to be intact, despite the blowout vote against the new Constitution. Boric will have to draw on deep reserves of political skill to orchestrate a second writing and an approval initiative that will avoid the gaffes of the September referendum campaign. Boric is firmly identified with the movement and the process, but he does not control it—and the same is true for the center-left parties in his coalition.

Chile is not another South American nation convulsed by destabilizing currents of authoritarian populist rule, in the mold of Brazil. Indeed, the revolt against the Pinochet neoliberal regime might be more aptly termed anarchist than populist. It has a dark side. During the 2019 uprising, protesters trashed and burned Metro stations; a Catholic Church was ransacked; black-clad “Front Line” squads wielded clubs and shields in skirmishes with Chile’s notoriously brutal militarized police.

Boric’s administration has not seen a repeat of the violence. Most political observers in Chile credit him with calming the waters in 2020, when the protests threatened to get out of control.

At the same time, his approval rating has plummeted. Among other crises, Chile has been hit by high inflation and drought. Boric’s ambitious reform agenda is only getting started—and in order to steer it back toward consensus, he must now coach a leaderless movement in an orderly rewrite of the country’s first constitutional rewrite.

John Dinges has been writing for many years on Latin America. His latest book is The Condor Years: How Pinochet and His Allies Brought Terrorism to Three Continents.