Civil society in South Korea renewed its commitment to ensure universal access to medicines and public pharmaceutical production, building on decades of mobilization 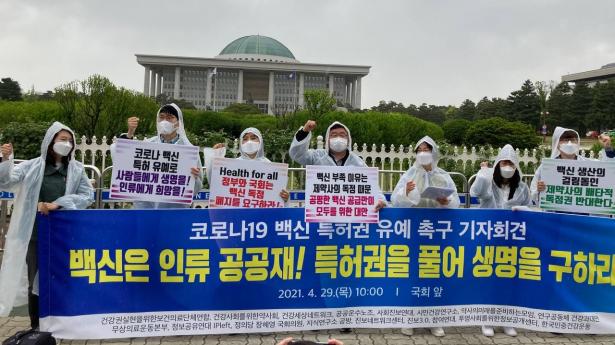 Patients’ organizations, right to health groups, and other sections of civil society in South Korea remain committed to upholding universal access to essential medicines locally and globally, states a recent report published by the Alliance for a Better Pharmaceutical Production Regime (Alliance). Members of the Alliance, including the People’s Health Institute (PHI), Korean Pharmacists for Democratic Society (KPDS) and others, have expressed their intention to continue the struggle launched in the 2000s, driven by the need to ensure secure access and the public character of medicines.

While activists largely agree that South Korea has widespread production capacities, they warn that these are under-used or misused, at least as far as responding to global public needs is concerned. As governments do not make public production of pharmaceuticals their priority so as to favor private companies, the question about their optimum utilization lingers. “What we can agree on is that Korea has a lot of production capacities. But because there is not enough transparency and systemic development of public resources in the field, we don’t actually know much about their quality,” says Sun Kim, director of PHI’s Research Center on Global Solidarity.

The existing production capacities in South Korea were mostly developed with government support since the late 1990s. But since then, pharmaceutical production has been almost exclusively regarded as an engine for growth rather than a tool for advancing public interest. Such a set-up gives producers the advantage when they negotiate with the government, and they have been known to use this as much as possible. The industry’s attempts to protect their own profits and interests have been systematic, carried out in the long-term, and sometimes involve less-than-formal deals.

In the early 2000s, there were widespread protests against the high cost of the leukemia drug Imatinib. The producer of the drug, the Swiss company Novartis, secretly offered patients’ groups the option of reimbursing out-of-pocket payments if they agreed to not oppose the price the company was going to offer to the government. This would have meant that the patients would take the medicine for free, but the government would bear the cost and it would further allow the company to quote high prices while negotiating with other countries, explains Sun Kim. “In practice, this would mean that the same drug would remain out of reach for people in other parts of the world, who would be forced to accept the price as it was set by the producer,” she says.

Going beyond the narrow focus on securing access to medicines for the Koreans alone, the Alliance advocates for ‘publicness’ of global pharmaceutical production. To achieve that goal, it is necessary to make the most of existing production capacities around the world, and orient them towards addressing global public health needs. It is difficult to achieve such a goal in a context where policies are shaped around concepts such as knowledge-based economy and innovative growth, like in the case of South Korea.

The existing set of policies has led to a relaxation of drug regulation practices, often to the detriment of patients – and almost always to the detriment of the public health budget. Several pharma-related scandals in the past six years bring a warning about the dangers of pursuing a path which tries to incentivize private production through deregulation and fostering venture capital. “The current model gives pharmaceutical companies ample space to protect the prices of their companies’ stock, although this might go against the best interest of patients and the health system,” says Sun Kim.

In South Korea, a well-known example of the misgivings of such a model is the case of Invossa, a biologic produced by Kolon Life Sciences for the treatment of moderate osteoarthritis. The product received regulatory approval process assistance from the Ministry of Food and Drug Safety (MFDS), and it was lauded as South Korea’s first own cell-based gene therapy when the drug was granted a license by the MFDS in 2017. By 2019, it was recalled. It surfaced that Kolon Life Sciences failed to disclose that there was a change in the type of cells used to produce the drug during development, presumably to avoid problems with licensing.

A similar thing occurred with a candidate for lung cancer treatment, the drug Olita. In this case, the producer Hanmi Pharmaceutical delayed reporting of side effects and deaths during the development clinical trial stage for more than a year. In addition, the company belatedly announced that the technology export contract with Boehringer Ingelheim was terminated.  By doing so, Hanmi Pharmaceutical shielded its status on the stock market for a little longer, misleading the public at the same time.

This practice of misinformation or delayed information is not a human error or an innocent mistake. For big businesses, keeping up the prices in stock markets has become as important as the price of products itself. Big pharmaceutical companies are no exception. “It serves the interest of pharma companies if there is anticipation of a blockbuster drug. This gives them an incentive to not report data on time. This lets them make money on medicines for as long as they are in the market, even though such medicines might be detrimental to patients’ health,” notes Sun Kim.

The Alliance for a Better Pharmaceutical Production Regime warns that more examples such as these are likely to arise in case there is no major shift in policy. To ensure a reduction in domestic drug cost and boost accessibility of medicines in low and middle income countries, “watching and checking the government and companies to meet their changed status and expectations has become a new task for Korean civil society,” the Alliance concludes in its report.