Trump's candidacy and his administration were shaped, in no small part, by Jones Day, one of the most politically connected law firms in DC. 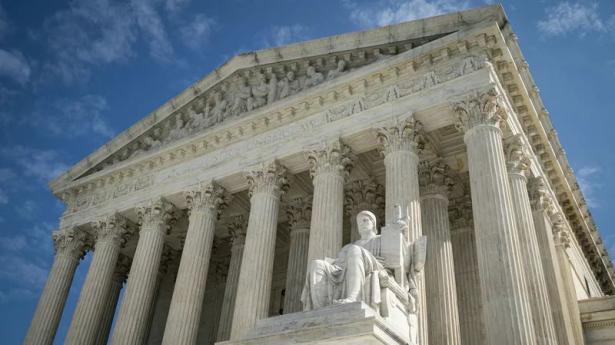 President Trump appointed three Supreme Court justices and nominated 274 individuals to federal judgeships. Journalist David Enrich says many of those picks were influenced by lawyers from the firm of Jones Day.,Al Drago/Getty Images

Editor's note: Jones Day is an underwriter for NPR and has done work for NPR in the past.

While campaigning for president in 2016, Donald Trump famously cast himself as a Washington outsider, someone who would "drain the swamp" of special interests and cronyism. But New York Times journalist David Enrich notes that both Trump's candidacy and his administration were shaped, in no small part, by Jones Day, one of the most politically connected law firms in DC.

For much of Jones Day's history, it was a juggernaut in the field of corporate litigation, raking in billions a year in fees from tobacco, opioid, gun and oil companies, among many other giant corporations. But, as Enrich writes in his book, Servants of the Damned, the firm became particularly embroiled in politics during the Trump administration.

"They were more embedded in the Trump administration than any law firm I can think of in any past presidential administration," Enrich says. "Throughout the White House and the Justice Department, as well as other agencies, basically, everywhere you looked, you would find a once and future Jones Day lawyer."

Enrich points out that Don McGahn, a prominent Jones Day lawyer, left the firm to become Trump's White House counsel. McGahn assumed the responsibility of picking the judges Trump would nominate to the federal courts, including the Supreme Court.

"One of the core kind of tenets of McGahn's judicial philosophy was this real antipathy toward what he calls derisively 'the administrative state,'" Enrich says. "And one of the biggest results of that is that it translates into judges who no longer give nearly as much deference to the rights and authority of federal agencies as had been the norm."

"The notion that this outsider trying to shake things up would turn to a firm like Jones Day to staff his administration and help pick his judges and things like that, it is really antithetical to that," Enrich says. "When I think of the swamp and I think when Trump thinks of the swamp, there are few swampier things than that type of inside baseball lobbying."

On the outsized role Jones Day played in the Trump administration 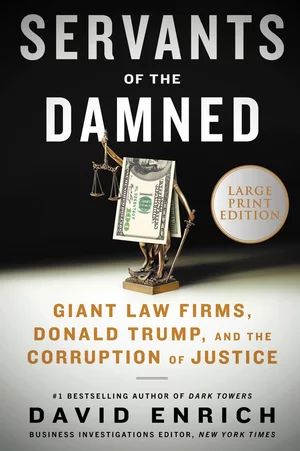 Servants of the Damned, by David Enrich / Harper Collins

Starting in 2015, the law firm represented his campaign, and they did so through the 2016 cycle and then again the 2020 campaign, that was work that basically started on Inauguration Day of 2017. And so they were front and center on both of his presidential campaigns, but they were not representing him personally. ...

The White House counsel, Don McGahn, was a very prominent Jones Day lawyer, and he surrounded himself in the White House with several senior Jones Day partners and associates who he brought with him. At the Justice Department, the solicitor general, Noel Francisco, was once and future Jones Day partner. And in the upper echelons of both in the civil division of the Justice Department you had some of the people right beneath the attorney general were from Jones Day. You had someone at the Consumer Product Safety Commission, the Federal Energy Regulatory Commission, the Commerce Department, on and on the list goes.

On Jones Day accomplishing political interests once Trump was in office

Shortly after Trump became president, Jones Day lawyers, both inside the administration and outside the administration, those still at the firm, started accomplishing things that they had long sought to accomplish but had not been able to do. And the clearest example of this to me is a series of lawsuits that Jones Day had brought on behalf of a bunch of Catholic organizations that were basically challenging an important provision of Obamacare, the Affordable Care Act. ... One of the first things that [the Trump] administration does with the help of Don McGahn, is they basically say they're going to end an Obama administration policy that sought to require employers to provide contraception coverage for their employees, which was part of Obamacare. And this was the subject of the lawsuit. So right on the face, it represented a big win for Jones Day and its clients.

The law firm isn't a monolith, and I think it's important to kind of say that at the outset. And this is a law firm that has something like 2,500 lawyers in dozens of countries all over the world. And like any large organization or large law firm, there are employees and lawyers at Jones Day that have, I think, a wide range of political views ranging from far left to far right. What sets Jones apart is the degree to which the leadership of the firm is fairly uniform in their conservative thinking. ...

Their agenda ... ranged from lots of deregulation and really getting the government out of the affairs of businesses to a very large extent, and then also an agenda of what I think the right people on the right would call "religious liberty." And I think people on the left and to a certain degree, people in the center would say much dramatically eroding the separation of church and state in a way that allows religion to play a much more prominent role in public and political life.

Shortly after Trump was elected, Mitch McConnell gave some advice to Don McGahn. The advice was that instead of relying on a committee at the White House to debate and pick nominees for the Supreme Court and other federal courts, McConnell's advice was, "Look, you should get Trump's permission to just do this by yourself. You alone should have the power to pick the judges that Trump will nominate." McGahn liked the sound of that. He proposed it to Trump and Trump when he offered McGahn, the job of White House counsel, readily agreed to this. And so McGahn, very quickly, before Trump even was sworn in as president, all of a sudden was sitting on this enormous power that was really quite unusual historically. And he was the one who would be picking the people that Trump nominated to all sorts of federal courts.

It's now bringing cases through the Supreme Court and through the lower courts that were basically made possible by this deluge of very conservative federal judges that are now on the benches of many courts. So just in the Supreme Court's past term, which was obviously one of the most radical and farthest reaching the Supreme Court terms, certainly of my lifetime, and Jones Day played pivotal roles in some of these cases. And I think the biggest one was the case, the West Virginia versus EPA case that dramatically hemmed in the power of the EPA to regulate carbon emissions. And that was brought on behalf of the Jones Day client, a big coal company.

Jones Day was the law firm that basically ended the eviction moratorium during the pandemic that the Biden administration had imposed. And Jones Day, just reading the tea leaves and talking to their lawyers now, it's quite clear that they are plotting a wide range of attacks on the power of the federal government to oversee private businesses and private companies in a way that goes back to Don McGahn and his colleagues' hatred of the so-called administrative state. And they are now in a position to be able to much more forcefully advocate those positions and be successful in their advocacy — thanks to all of the judges that Trump, at McGahn's direction and with McConnell's support, managed to get on to virtually every federal court in the country.

Sam Briger and Seth Kelley produced and edited this interview for broadcast. Bridget Bentz, Molly Seavy-Nesper and Meghan Sullivan adapted it for the Web.

Terry Gross began her radio career in 1973 at public radio station WBFO in Buffalo, New York. There she hosted and produced several arts, women's and public affairs programs, including This Is Radio, a live, three-hour magazine program that aired daily. Two years later, she joined the staff of WHYY-FM in Philadelphia as producer and host of Fresh Air, then a local, daily interview and music program. In 1985, WHYY-FM launched a weekly half-hour edition of Fresh Air with Terry Gross, which was distributed nationally by NPR. Since 1987, a daily, one-hour national edition of Fresh Air has been produced by WHYY-FM. The program is broadcast on 566 stations and became the first non-drive time show in public radio history to reach more than five million listeners each week in fall 2008, a presidential election season. In fall 2011, Fresh Air reached 4.4 million listeners a week.

Fresh Air with Terry Gross has received a number of awards, including the prestigious Peabody Award in 1994 for its "probing questions, revelatory interviews and unusual insight." America Women in Radio and Television presented Gross with a Gracie Award in 1999 in the category of National Network Radio Personality. In 2003, she received the Corporation for Public Broadcasting's Edward R. Murrow Award for her "outstanding contributions to public radio" and for advancing the "growth, quality and positive image of radio." In 2007, Gross received the Literarian Award. In 2011, she received the Authors Guild Award for Distinguished Service to the Literary Community.

Gross is the author of All I Did Was Ask: Conversations with Writers, Actors, Musicians and Artists, published by Hyperion in 2004.

Born and raised in Brooklyn, N.Y., Gross received a bachelor's degree in English and M.Ed. in communications from the State University of New York at Buffalo. Gross was recognized with the Columbia Journalism Award from Columbia University's Graduate School of Journalism in 2008 and an Honorary Doctor of Humanities degree from Princeton University in 2002. She received a Distinguished Alumni Award in 1993 and Doctor of Humane Letters in 2007, both from SUNY–Buffalo. She also received a Doctor of Letters from Haverford College in 1998 and Honorary Doctor of Letters from Drexel University in 1989.