Black, Indigenous and Appalachian communities are fighting the Mountain Valley Pipeline and other projects spurred as concessions to last month’s landmark climate legislation. 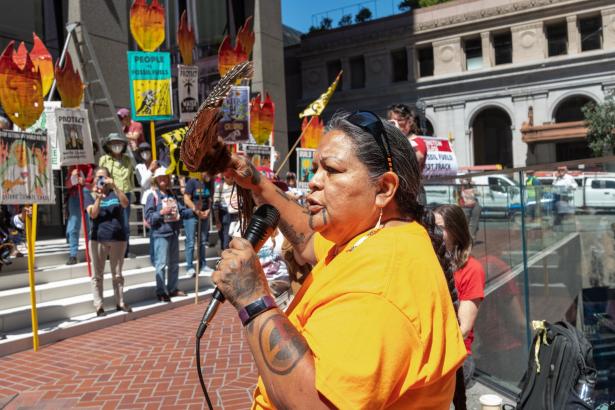 Last Thursday, hundreds of protesters led by Indigenous, Appalachian and Black environmental activists descended upon Washington, D.C. to rally and protest against the Mountain Valley Pipeline, a controversial $6.6 billion natural gas project with a planned route from West Virginia to North Carolina.

“No dirty deal!” protesters shouted, as they declared the area of Appalachia most affected a “climate sacrifice zone.”

Last month’s landmark federal climate legislation, passed as part of the Inflation Reduction Act of 2022, represents the largest investment in climate action in U.S. history. Yet, fossil fuel-friendly Democrats forced major concessions into the bill that mandate drilling and pipeline deals like the Mountain Valley Pipeline across the country. Frontline communities across the country, who have long taken a leading role in the fight for environmental justice, aren’t backing down.

“This new bill is genocide, there is no other way to put it. This is a life or death situation and the longer we act as though the world isn’t on fire around us, the worse our burns will be,” Siqiniq Maupin, executive director of Sovereign Iñupiat for a Living Arctic, told The Guardian last month. “Biden has the power to prevent this, to mitigate the damage.”

Sovereign Iñupiat for a Living Arctic is part of a national coalition of more than 1,200 organizations called People vs. Fossil Fuels, which organized the rally last Thursday.

The actions come as a slew of anti-protest bills take effect across the country that aim to suppress Indigenous and environmental activists’ opposition to oil and gas projects. A new report from the non-profit Climate Cabinet found that the right-wing American Legislative Exchange Council had drafted anti-climate protest legislation in 24 states since 2018. The bills, which may charge protesters with felonies for disrupting “critical infrastructure,” were passed in 17 Republican-led states, including West Virginia.

“Indigenous-led demonstrations opposing fossil-fuel projects have been one of the most successful and effective forms of climate action to date,” Jonathon Borja, co-author of the report, told Mother Jones. “In an affront to the protected freedoms of our Constitution, state legislatures have found a new legislative mechanism to oppress frontline communities and cause further harm and destruction to our planet.”

Legislators that supported the bill in states like West Virginia referenced the major 2016 protests against the Dakota Access pipeline on the Standing Rock Indian Reservation as an example of the kind of direct action the legislation aims to prevent.

Originally slated for completion in 2018, the Mountain Valley Pipeline, or MVP, has faced widespread opposition and legal challenges over environmental violations. The MVP’s pipeline also crosses over 200 miles of land that’s highly susceptible to landslides, which have caused five major gas pipeline explosions in the past four years.

Referring to the federal climate bill, Russell Chisholm, Mountain Valley watch coordinator for Protect Our Water, Heritage, Rights,  told the Washington Post: “Just the fact that something has passed has given people some sense of optimism. There’s also a deep frustration of how that came about and the compromises in there, and everyone is really struggling with that right now.”

Sara Herschander is a freelance journalist and audio producer based in New York City. Her work has appeared in The American Prospect, Documented NY, and Univision, among other publications.