A program has lent tens of thousands of e-books in places they're forbidden. 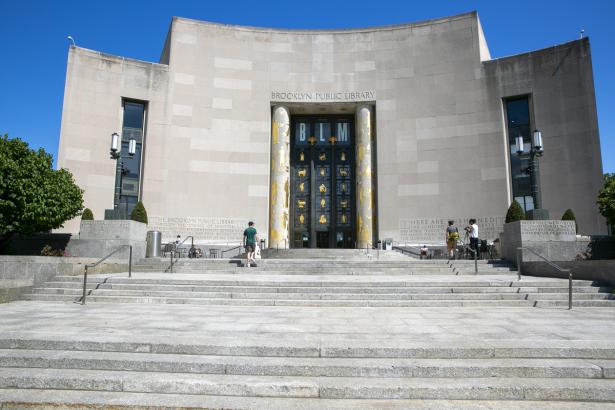 NEW YORK — The front line of America’s culture war now runs straight through the nation’s school libraries — with conservatives in dozens of states outlawing books and instruction and the left working to shield targeted authors.

Far from the trenches in states like Florida and Texas, organizations in deep-blue New York are stepping into the fray by directly lending 25,000 books to non-residents since spring, including thousands of students living under the bans. The Brooklyn Public Library’s “Books Unbanned” program provides access to its eBook collection and learning databases for people between the ages of 13 and 21.

The library’s program is reaching into Oklahoma, which enacted some of the most sweeping laws last year to ban materials that might cause anyone to “feel discomfort, guilt, anguish or any other form of psychological distress” because of their race or gender identity.

One Oklahoma high school teacher resigned after suffering backlash for introducing students to the program. Now colleagues, students and community members are making yard signs, and kids are wearing shirts to school advertising the program with a barcode that connects to the BPL website on phones.

“The QR code has become — for lack of a better phrasing — it’s become a symbol of resistance locally in my state,” former Norman High School English teacher Summer Boismier said in an interview. She says she quit in protest, and her teaching license is now in jeopardy, after she provided the code to students.

Similar bans have been instituted in a push that’s seen hundreds of titles nixed in nearly 3,000 schools across 26 states, according to the nonprofit free speech group PEN America.

The group No Left Turn in Education, which supports some bans, says it opposes schools that impose the “orthodoxy of the left,” as well as books containing sexually explicit imagery.

“The school is not a playground for politicians,” founder and president Elana Fishbein said. “The school is to educate kids to give them the tools that they need to eventually succeed in life. ... It should be neutral territory.”

Restricting books isn’t new, but the bans — some statewide and others only affecting specific school districts — are increasingly part of a larger, nationwide clash over classroom discussions of race and gender identity that has seen conservative activists push money and candidates for school board positions. The right in particular has seized on education issues in upcoming November elections after Republican Glenn Youngkin’s pledge to give parents more power over what their children learn in school helped propel him to victory in Virginia last year.

But in Wisconsin, for example, Gov. Tony Evers, a Democrat, said in June that if he loses reelection in November, Republicans will ban books, especially those pertaining to LGBTQ issues.

Back in Oklahoma, Boismier’s departure galvanized parents in the area to hand out flyers and T-shirts with the QR code that students are wearing to school. Heather Hall, who owns a local bookstore, said Books Unbanned has been a lifeline for her middle-schooler, River, who uses they/them pronouns.

“How extraordinary is it that I am in Norman, Oklahoma … I have my kid who is going through some stuff in middle school and has access to these very kind people all the way across the country,” she said.

Before the academic year began, Boismier covered potentially violative books in her classroom with butcher paper that included the QR code for Books Unbanned. That prompted a parent to complain that students could access “pornographic material,” including “Gender Queer: A Memoir” by Maia Kobabe that explains what it means to be nonbinary and asexual.

Nick Migliorino, the superintendent of Norman Public Schools, recently said the parent alleged that Boismier made “derogatory and divisive remarks” about state legislators during class time and used her classroom “to make a political display expressing her own opinions.”

Migliorino also said there was no violation of the Oklahoma state law or State Department of Education rules and that the issue was not about “any books actually on the teacher’s shelves or the use of the public library QR code.”

The city, Oklahoma’s third largest with a population of roughly 120,000, is considered one of the red state’s more moderate burgs. Donald Trump nonetheless won the area by 14 points in the 2020 presidential election. The area also grapples with a dark history: until 1967, it was a “sundown town” that barred Black people from owning homes or even staying out after nightfall.

“Rather than being more concerned about the kids and their development and is this appropriate for kids at that grade level, they’ve decided to take an ideological bent here — not an academic exercise — but an ideological one in pushing this into our schools,” Walters said in an interview.

The Brooklyn library says disseminating information is part of its core mission. And when more states began outlawing books in schools and libraries, the library system felt compelled to defy them.

“We’re saying this is what libraries do, we provide access to these materials,” BPL president and CEO Linda Johnson said. “Literature is such a powerful thing and it’s something which allows you to get to know yourself better, your world, it allows you to see new things and we don’t think anyone should be shut out of that regardless of where they live.”

Deborah Caldwell-Stone, director of the American Library Association’s Office for Intellectual Freedom, lamented various states’ efforts to silence LGBTQ individuals, as well as Black, indigenous and people of color. She called Oklahoma a nexus for legislative activity that seeks to remove such books and “tightly control” young people’s education.

Fishbein from No Left Turn in Education says books such as Jelani Memory’s “A Kids Book About Racism” and Anastasia Higginbotham’s “Not My Idea: A Book About Whiteness” teach students to hate the United States.

Books Unbanned “went viral” since it launched in April, and the library was deluged with more than 5,100 inquiries from teens nationwide, Johnson said.

The program is making inroads elsewhere across the country.

Texas American Federation of Teachers president Zeph Capo said it is reversing efforts by conservative groups like Moms for Liberty that are leading book-banning efforts even if putting books in front of teens isn’t necessarily slowing them down.

“The library code is not stopping them from continuing to push these policies in an attempt to disrupt the schools,” said Capo, whose statewide union has 66,000 members, including educators, retirees and school employees. “The library code may be, I would say, is making them ineffective in keeping books away from kids, absolutely.”

Texas is the epicenter of the nation’s classroom book bans, having nixed more texts this year than any other state, according to the Texas Tribune.

In October 2021, state GOP Rep. Matt Krause asked schools throughout the state if they have any of the roughly 850 books on a list that he compiled that focus on race and sexuality. Some school districts in Texas began removing those books.

Lone Star State parents can also temporarily remove their students from classes or activities they deem incompatible with their religious beliefs. They can also check instructional materials and see their students’ records.

New York’s other public library systems — the Queens Public Library and the New York Public Library — have undertaken efforts similar to BPL. The NYPL, which serves the boroughs of Manhattan, the Bronx and Staten Island, made banned materials free through their free e-reader app in April and May.

Tony Marx, the New York Public Library’s president and CEO, said it is not a “big city pushing liberal agenda” but about libraries doing their jobs to make knowledge and information accessible.

“What Brooklyn is doing is fabulous,” Marx said. “What any of us can do to help resist this effort to constrain what the public can read is essential and … we should do everything we can. The simple fact is that it’s outrageous that this is happening.”

Madina Touré is the New York City education policy and politics reporter for POLITICO New York. She focuses on K-12 and higher education.