The pandemic pushed University of Michigan nurses to the breaking point, as supervisors forced overtime work to account for understaffing. So nurses organized through their union, winning a contract that should inspire nurses everywhere. 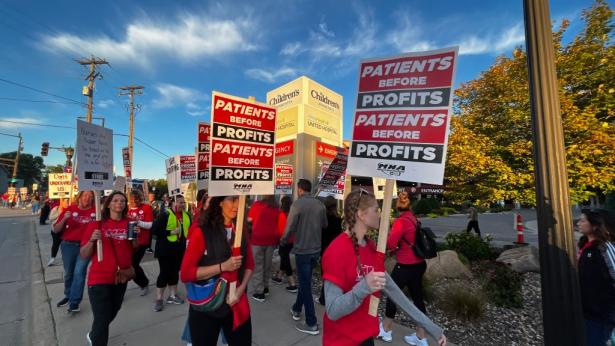 In the spring of 2021, as the national COVID-19 vaccine rollout promised to lift the burden of overwhelmed hospitals, nurses at the University of Michigan were working harder than ever. Understaffing has been a problem for University of Michigan nurses since the 1980s, but it worsened during the pandemic, as patient surges met with hospital-wide cost containment measures that further thinned staff and resources.

Over the first year of the pandemic, University of Michigan nurses filled gaps in staffing mainly by volunteering for overtime. As elective procedures resumed, management turned to mandatory overtime — a mechanism written into the union’s 2018 contract as an emergency measure — to staff the hospital. If a unit was short-staffed, supervisors called off-duty nurses. If one of these nurses picked up the phone, they could be mandated to work. Others were told to stay on after the end of their shifts. Nurses who declined mandates could be accused of patient abandonment.

Supervisors also used a “pre-mandating” system to continually adjust mandate schedules, creating an uncompensated on-call system. With the expanded use of mandatory overtime, the hospital began depending on this fail-safe as a routine strategy to resolve the patient-care deficits caused by chronic understaffing.

But on Saturday, October 1, following six months of negotiations, nurses at the University of Michigan ratified a contract that restores autonomy to nurses and places the burden on management, not workers, to fix staffing issues. In a right-to-work state, it is a pathbreaking win for the health care labor movement.

“Our job is to take care of patients. Our job is not to worry about who is being hired or how to hire or how to retain staff. That is management’s job. But we found ourselves trying to convince each other not to leave,” says Renee Curtis, president of the Michigan Nurses Association-University of Michigan Professional Nurse Council (MNA-UMPNC), the 6,200-member nurses’ union at Michigan Medicine. “That’s where the union came in. It gave us our voice.”

At the heart of the nursing labor movement, and of dozens of labor disputes over the pandemic, is the demand for staffing levels that reflect the number of patients a nurse can safely care for. Nurses at the University of Michigan first struck over this issue in the 1980s amid the national rise of corporate restructuring in health care systems.

Nurses identify nurse-to-patient ratios as the primary factor that determines quality of patient care. Without minimum ratios, delivering care often feels like a “zero-sum game,” says staff nurse Mary Gallagher, in which attending to one patient means withholding treatment from another.

Many nurses report experiencing moral trauma from situations in which even hard work inevitably produces substandard care, leading to patient suffering and sometimes death. For Gallagher, an MNA-UMPNC member, staffing ratios are the greatest factor determining whether she feels she can stay in the field. “It can feel a lot of times in our health care system like nobody really gets the care that they deserve,” she says.

By March 2022, when the MNA-UMPNC bargaining committee began negotiating a new contract, a cycle of health crises and austerity measures had exacerbated long-standing staffing problems.

In the first months of the pandemic, Michigan Medicine projected millions of dollars in lost revenue and cut costs in response, laying off 738 support staff. It recuperated its financial losses, profiting about $340 million by June 2021. But it did not replace the employees, instead depending on nurses to indefinitely absorb their ancillary duties, like transporting patients, drawing blood, or running across the hospital to fetch applesauce.

Facing pandemic burnout with no end in sight, nurses left “in droves,” says Curtis, joining the lucrative travel-nurse sector or leaving the nursing industry altogether. Management’s use of mandatory overtime intensified burnout, as nurses lost time to rest between long shifts. Over the past year and a half, nurses filed thousands of “Assignment Despite Objection” forms, a formal channel for disputing unsafe situations.

“They made millions on the backs of nurses working harder and harder, and nurses got to the point where we couldn’t do it anymore,” says Curtis.

Implementing mandatory staffing ratios was at the top of the union’s demands. Yet management declined to negotiate on ratios and would only discuss staffing guidelines. In August, after working without a contract for over a month, the union filed an unfair labor practice charge against the university.

In early September, 96 percent of voting members voted to authorize a work stoppage.

The vote brought a swell of community support from patients and their families, university affiliates, faith leaders, regional Democratic Socialists of America chapters, and local unions. “Some of the stories that they tell are quite life-changing,” says Karthik Pasupula, a member of the University of Michigan undergraduate student government. He says many students were prepared to sit on picket lines.

The nurses were also supported by unions across the university through the All Campus Labor Council. “We all have the same challenges, because not only do we have corporatized medicine, but there’s also corporatized university education,” says Jackson. By the same token, Pasupula believes that the existence of graduate student and adjunct faculty unions connects students more directly to university labor issues.

Curtis says that the “pressure that came from the community and from key stakeholders within the university administration, and our ability to record literally what has happened on our units,” was what pushed the university to bargain in good faith in the eleventh hour.

By mid-September, there was a contract on the table. “Surely, in the state of Michigan, it’s the best staffing language that we’ve ever gotten in any contract,” says Jackson.

The new contract functionally does away with mandatory overtime. But it doesn’t just reverse the labor violations that took hold during the pandemic. It also establishes enforceable staffing ratios, forging a path for long-term solutions to issues that have frequently plagued Michigan nurses.

It allows mandatory overtime in extreme emergencies, like natural disasters. But, says Gallagher, “it acknowledges that chronic understaffing is not a natural disaster.”

Put together, these changes shift the burden to adequately staff units onto the hospital, which is financially liable if nurses are put in unsafe staffing situations. Meanwhile, overtime and on-call work is incentivized, not mandated, and nurses can use professional judgment to work below their designated ratios with high-acuity patients.

Now, the challenge is to uphold the agreement. The contract “brings together all the puzzle pieces of accountability,” says Curtis, but “we are still living in a short-staffing world.”

It was an end-of-an-era merger: the resulting health system surpassed Ford and General Motors as the state’s largest employer.

But labor is building power in health care, too. A report from Cornell’s Labor Action Tracker found that almost half of the 140,000 people who went on strike last year worked in the health care sector. MNA-UMPNC nurses attribute their victory partially to the fifteen thousand nurses of the Minnesota Nurses Association who struck last month, part of a wave of Midwest nursing activism.

“I think that the people who directly benefited from the Minnesota nurses’ strike were Wisconsin and Michigan,” says Jackson. “I’m sure Michigan [administrators] heard quite a bit about how fun things were in Minnesota without the nurses.”

“More and more nurses are aware of their union, are aware of how to use the tools of the union,” she says, partly because of the role of state and national unions in securing emergency workplace safety protections during the pandemic. Now, Michigan Medicine nurses hope their contract will raise workplace standards in hospitals across the state.

“If you listen to the frontline nurses, patients are safer,” says Jackson. “The reason I’m in my union is because it gives me a strong voice at the bedside of my patient that allows me to advocate for their safety with my union behind my back.”

Eva Rosenfeld is a writer and artist from Michigan.