It will compensate seniors for the bout of inflation. Workers deserve as much. 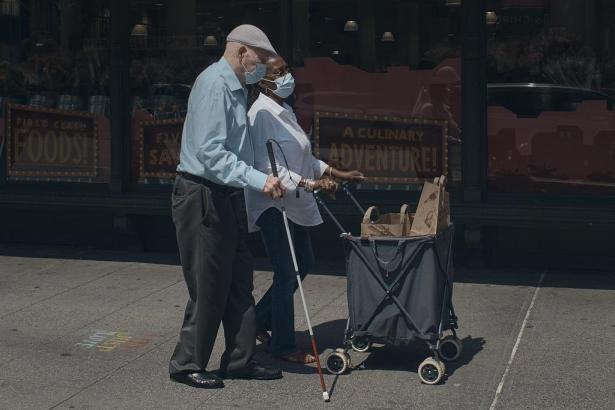 A man and a woman leave the supermarket after shopping, July 27, 2022, in New York. 16.1 million people aged 65 and older are lifted out of poverty each year by Social Security benefits.,Andres Kudacki/AP Photo

On Thursday, the federal government is expected to announce the Social Security cost-of-living adjustment for 2023, based on the current annual inflation rate. The adjustment is expected to be at least 8.7 percent, a remarkable benefit for the more than 70 million Americans who are either seniors or draw Social Security on some other basis such as disability or widowhood.

This is worth more than a moment’s reflection. For starters, no other significant part of America’s patchwork retirement system has an automatic cost-of-living adjustment.

Before the 401(k) revolution of the 1980s and 1990s, which was engineered to shift risks from corporations to their employees, about 60 percent of American workers had traditional, “defined benefit” pension plans. In these plans, the employer guaranteed a pension for as long as the retiree lived, typically based on the worker’s wages times years of active service.

The rest have a mix of IRAs, Keoghs, and 401(k)s, none of which have cost-of-living adjustments. Even worse, those plans are not pensions at all; they are tax-sheltered savings plans, which leave workers with a flat sum upon their retirement. Which means that you can outlive your savings. And the typical plan has only enough savings to support a worker for far fewer years than his or her life expectancy.

With Social Security, you can never outlive your savings because the checks come for as long as you live. This, among other benefits, is why Social Security is so much better a deal than any private scheme. And unlike most private retirement savings plans such as 401(k)s, Social Security does not have a commercial fund manager raking off a cut, at the expense of the worker/retiree.

It’s also the case that other forms of retirement savings, tax-sheltered or otherwise, are vulnerable to the vagaries of the stock market. If you happen to retire when the market is performing well (and you are well-off enough to even have some money in the stock market), good for you.

But if you were planning to retire this fall, or continue your living standards in your retirement, the market is down about 20 percent. Given the Fed’s perverse rate hikes, it is likely to remain depressed for a while. But because Social Security is a government program with a 75-year time horizon, it is immune to stock market shocks.

According to the Economic Policy Institute, the median savings of American workers, including plans such as 401(k)s, was just $60,000. For the 40 percent of Americans aged 60–69 who even have a 401(k), the median holding is about $82,000. But that is enough for maybe six or seven years, while the average life expectancy for a 65-year-old is 18.2 years for men and just under 20 years for women.

As reports of the likely 2023 cost-of-living adjustment have been published, we are already getting comments from the usual suspects that Social Security is too expensive and too generous, and the adjustment will only add to its long-term deficit.

But too generous compared to what? The average Social Security benefit is just $1,626 a month. And because of the collapse of the rest of the retirement system, two-thirds of the elderly depend on Social Security for at least three-quarters of their income.

A study from the Center on Budget and Policy Priorities (CBPP) found that 16.1 million people aged 65 and older are lifted out of poverty each year as a result of their Social Security benefit. With Social Security, the poverty rate among senior Americans is 9 percent. It would be closer to 38 percent without it, according to the CBPP.

You might argue that retirees are getting a better deal than workers, most of whom have no cost-of-living adjustments. Inflation is up around 8.7 percent over a year ago, but the average worker wage increase is up only 3.8 percent. But surely the cure for this is to increase wages, not to take benefits away from seniors.

Billionaires are doing better than ever. The real economic struggle is the very rich versus everyone else, not average workers versus average elderly people (who are the same people at different life stages).

And don’t forget that Social Security is financed by payroll taxes—on wages. When wages lag, so do Social Security receipts. The main reason why Social Security faces a long-term deficit is that since the late 1970s, wage increases have not kept pace with productivity growth.

So the coming Social Security cost-of-living adjustment, which does not give retirees a real benefit increase but just keeps them even with inflation, is not a moment for fiscal angst. It’s a moment for celebration—and defense of our best social insurance program.

Robert Kuttner is co-founder and co-editor of The American Prospect, and professor at Brandeis University’s Heller School.