Aggressive antitrust enforcement is starting to notch some victories. 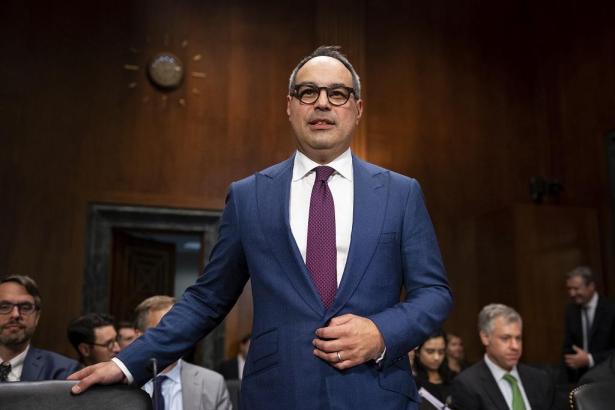 Jonathan Kanter, assistant attorney general for the Antitrust Division at the Department of Justice, prepares for a Senate Judiciary Subcommittee hearing on antitrust laws and enforcement, at the Capitol in Washington, September 20, 2022.,Graeme Sloan / SIPA USA via AP Images

There are plenty of theories about why this is happening. But I think it could be tied to the fact that we have become culturally conditioned to expect the world to move at internet speed, while our governing system of checks and balances moves like an 18th-century carriage when it moves at all. Impatience has seeped into electoral decision-making—often justifiably, as chronic gridlock has stymied progress on serious problems for decades. Even when the system does get around to spitting out the progress we seek, it is often too late to save the skins of those who produced it.

This is approximately the trajectory of the fight against corporate power. For nearly two years, the Biden administration worked to assemble the exact team you would want for an aggressive push against runaway monopolization. They said the right things and made the right decisions. The president signed an executive order outlining a whole-of-government approach to promoting competition across the economy. The agencies sued Facebook and Google, and started a phalanx of investigations.

But things didn’t get immediately better, because antitrust cases take a long time, and the courts have been generally hostile to them for 40 years, and the Federal Trade Commission spent several months with a 2-2 Democratic-Republican split, and probably 19 other factors I don’t know about. Thus you got sharp observers like Scott Galloway and Kara Swisher grumbling back in September that “You can list [FTC chair Lina Khan’s] accomplishments on zero hands right now.”

That wasn’t actually true then. But what our instant-gratification society isn’t equipped to handle is the idea that this sort of persistent effort and preparation, even if it looks like nothing is happening, is what leads to the breakthrough. And this week feels like that breakthrough, ironically coming in the middle of a midterm election climax that will drown it out.

On Monday, U.S. district court judge Florence Pan blocked the merger between Penguin Random House and Simon & Schuster, which would have narrowed the major book publishers from five to four. Significantly, the Justice Department’s Antitrust Division, led by Jonathan Kanter, based its argument on the fact that the consolidation would have reduced advances for authors because they would have fewer companies bidding on their services. That’s an argument about the impact of a merger on workers, not consumers, which Robert Bork famously argued was the only thing antitrust enforcement should concern itself with. The Justice Department also claimed that cultural output would be reduced as a result of the merger, another novel (and correct) application of antitrust law.

If that were the only news of the week, it would signal a sea change: the first successful merger challenge that went through a full trial in half a decade. But also on Monday, Kanter announced a guilty plea in a criminal monopolization case under Section 2 of the Sherman Act, the first case of its kind in 45 years. Nathan Zito admitted to monopolizing the niche market of highway crack-sealing services by offering his chief rival $100,000 to split up the country, with Zito’s company taking Montana and Wyoming and his competitor taking South Dakota and Nebraska. Zito faces up to ten years in prison.

Our instant-gratification society isn’t equipped to handle the idea that this sort of persistent effort and preparation is what leads to the breakthrough.

Just a couple of days earlier, the DOJ sent out inquiry letters to private equity firms, asking about partners of those firms who sit on corporate boards for multiple companies that they own in the same industry. This is known as interlocking directorates, and the conflict of interest is obvious: A board member of multiple companies in the same market could prefer that they don’t compete, and take steps to ensure they don’t. Last month, similar inquiries caused seven directors on corporate boards to resign. Like the DOJ’s other actions, interlocking directorates are clearly illegal; it’s just that the section of the law barring the practice was simply forgotten during the decades of corporate domination of government.

So that was Monday. On Tuesday, the states got into the act, with Washington state Attorney General Bob Ferguson filing suit to block a feature of the Albertsons-Kroger merger of America’s two largest grocery chains. Embedded in the deal was a special dividend payout from Albertsons to its private equity owners of $4 billion, which is more than Albertsons has in cash on hand. Such a large payment would put Albertsons in dire financial shape, thus enabling the company to say that Kroger buying it is the only option, while its private equity looters make off with the cash. California, Illinois, and Washington, D.C., have sued to block the payout as well.

The same day, Senate Banking Committee chair Sherrod Brown (D-OH) asked the Federal Trade Commission to investigate RealPage for antitrust violations. The rental pricing software company gained notoriety in a ProPublica piece explaining how RealPage’s tracking of every rental price paid in a market operates like a cartel in driving up rents.

So across the Democratic Party—led by but not limited to its standard-bearer—there is a concerted effort to use antitrust law (and consumer protection law) to police the routine rip-offs of the public and the overbearing nature of concentrated corporate power. And instead of just talk, there’s accompanying action, and even success.

This is having a real impact in the business world. The implosion of Mark Zuckerberg’s Meta, as he sinks the company’s ample fortune into virtual worlds that nobody seem to like, is hilarious, but it’s also being driven, at least in part, by a newfound focus on monopoly. Zuckerberg bought his way to dominance with Facebook, and it’s clear that’s not an available path anymore, so he’s pivoting to conquer another world. The FTC is going after him on that, too.

In fact, all of Big Tech is seeing a Wall Street exodus, as anti-competitive behavior is now seen as bad for business. Large conglomerates are thinking about splitting themselves up. Yes, mergers are still happening, and the DOJ and FTC won’t be able to stop them all. But big business is recalibrating, forced to do so by government.

The administration hasn’t yet been able to stop the biggest imposition of corporate power of the first two Biden years: the incessant and continuing markups of prices, using inflation and supply chain issues as an excuse. But the president did accuse oil companies of war profiteering this week, and maybe he’s working his way up to the kind of actions JFK took during his presidency, which did even more to back off corporate decisions that harm the public.

If things go as expected on Tuesday, decent legislative action will be unlikely, and major policy fights with huge implications will ensue. But that doesn’t shut the door on this president or his administration. It means that the kind of executive and agency action described above becomes all the more important. This is in fact the function of the executive branch, to execute the laws already passed. With the right personnel and direction, that can have a powerful impact, even if it takes some time. Even a president without Congress can have a successful term in office, and even change the trajectory of American life to the fullest extent possible. We know that, because it’s actually happening.

Become A Member of the Prospect!
Pledge to support fearlessly independent journalism by joining the Prospect as a member today.