labor These Cooks, Waiters and Casino Workers Could Swing the Senate 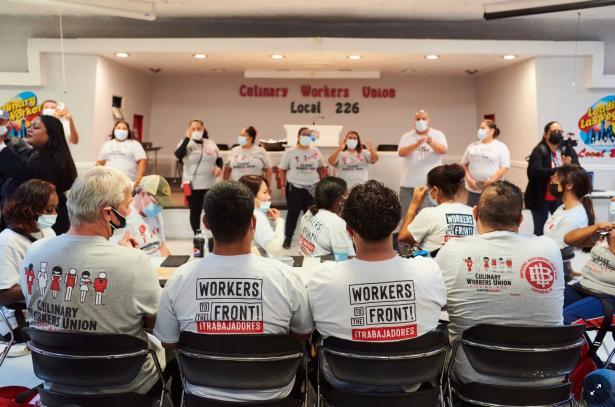 Members of Culinary Workers Union 226 gathered at its Las Vegas headquarters in October for a meeting that doubled as a political rally,Saeed Rahbaran for The New York Times

LAS VEGAS — Carlos Padilla walked to his pickup truck with a shoulder bag full of campaign literature and an agenda for shaping the future of the country. It was 20 days before the midterm elections, and Mr. Padilla, a pastry chef, was on his way out of the headquarters of the Culinary Workers Union 226.

The meeting he’d just attended was part business session, part political rally. There were energizing chants (“2-2-6!” “We vote, we win!”) and speeches from politicians pleading for the support of the 400 assembled servers, cooks, bussers and guest room attendants. Like Mr. Padilla, all would spend the rest of the day knocking on voters’ doors in a city that has long been an electoral pivot in this swing state, and beyond.

Even in the world of organized labor, hospitality workers have never been much of a force. But campaign visits to the union hall by presidential candidates — Barack Obama, Hillary Clinton, Joe Biden — over the years attest to this local’s unusual brand: political power.

The source of that power is the union’s 60,000 members, who work in the restaurants, bars, casinos and hotels that drive the economies of Las Vegas and Reno. Thanks to union-negotiated contracts, they enjoy job security and financial stability that are uncommon in hospitality businesses. Wages for members of the local average $26 per hour, according to union officials, and rise every year. The jobs come with health insurance, free training for career advancement and even help in making a down payment on a home.

Mr. Padilla, 53, is among the hundreds of members who take paid leaves of absence from their jobs (another contract provision) to campaign for candidates the union supports.

The local — often referred to by members simply as Culinary, or 226 — hasn’t always prevailed in this swing state’s races. But its diverse membership includes constituencies that political professionals believe hold the keys to power. About 55 percent of members are women, and 45 percent are immigrants. The average member is a 44-year-old Latina.

Canvassing expertise is another big advantage. The union’s army of hospitality workers has already knocked on more than 750,000 doors this campaign season, according to union leaders, who believe they can tip the election in favor of the largely Democratic slate they’re currently supporting. Many candidates are fighting for their political lives, most notably Senator Catherine Cortez Masto, who is in a tight race against the Republican challenger Adam Laxalt that could determine which party controls the Senate.

Asked how they would counteract the union’s ability to turn out voters, Mr. Laxalt’s campaign responded with a statement blaming Democrats for inflation and high gasoline prices. “I will fight for lower taxes,” it read, “and I will fight against government shutdowns and mandates that put workers out of a job.”

One exception to the union’s Democratic tilt was its endorsement of Brian Sandoval, a Republican, in his 2014 re-election campaign for governor. Mr. Sandoval broke with his party on issues important to the union, like immigration reform and the Affordable Care Act.

No Republicans in the state legislature voted for two recent union-backed, pandemic-related bills — one that provides workplace protections for hospitality workers, and one that guarantees their right to return to their old jobs.

Founded in 1935, the union established itself by recruiting workers from elsewhere to take jobs in this burgeoning desert city. Its ranks grew alongside Nevada’s gambling industry, not always harmoniously. One strike, which began in 1991 at the Frontier casino-hotel, lasted more than six years.

Jim Manley, a political consultant who was an aide to former Senator Harry Reid, said the union became impossible to ignore in 2008, when it helped Mr. Obama beat John McCain by 12 percentage points in Nevada, even though Mr. McCain was from neighboring Arizona.

Next week’s elections will be the first since the death last December of Mr. Reid, a political brawler whose close relationship with the union was mutually beneficial. “The question is whether the Reid machine is as effective as it was in the past,” Mr. Manley said.

“It’s that simple,” he wrote in a text message, adding that the union “has the bodies and experience to do it.”

Mr. Padilla started as a pastry chef at Treasure Island, a casino and hotel, nearly 30 years ago, after moving to Las Vegas from Flagstaff, Ariz. He became interested in union work when his brother-in-law, an iron worker, took him to a rally. “Turned out it was Culinary that was holding this rally,” he said. “I was in awe.”

In the past two years, Mr. Padilla has spent more time canvassing than baking bread and pastries. In the run-up to the 2020 elections, when he was laid off from his job because of pandemic shutdowns, the union paid him to canvass door-to-door.

He then moved temporarily to Georgia, where he joined other hospitality workers helping Raphael Warnock win a tight runoff election that gave Democrats a one-vote Senate majority. (Union officials said canvassers would likely return to Georgia if the current Senate race goes to a runoff.)

He brought a similar message to voters in October as he canvassed in a working-class neighborhood on the north side of town. It was in the district of Representative Steven Horsford, a former head of the Culinary Academy of Las Vegas, a school for hospitality workers run by the union.

One voter, Deborah Gallacher, told Mr. Padilla that she didn’t know yet if she would vote this year, but that Mr. Horsford “has knocked on my door. I voted for him every time he’s been on the ticket.”

He worked alongside Rocio Leonardo, 30, a room cleaner at Aria Resort & Casino. Ms. Leonardo, who moved to Las Vegas from Guatemala as a child, also campaigned in 2020, although she is not a citizen and can’t vote. “I do this because it feels like something positive for my children,” she said.

Ms. Leonardo approached a house with Marine Corps and prisoner of war flags hanging from the garage. She knocked twice on the door, as dogs barked ominously. The woman who finally came to the door was on a phone call and looked upset — until she saw Ms. Leonardo’s union T-shirt.

Walking away, Ms. Leonardo marked the woman as “not home” in the voter database on her smartphone, so a campaign worker would return to make sure she voted.

Such persistence, while often tedious in practice, has delivered results.

Electing allies to public office strengthens the union’s hand when negotiating on behalf of its members, said Ted Pappageorge, the union’s secretary-treasurer. “We don’t do union stuff so we can win in politics,” he said. “We do politics so we can win in union contracts.”

The union is especially motivated this election cycle, Mr. Pappageorge said, because the five-year contracts with employers for the vast majority of its Las Vegas members will expire next year. “We’re going to have really difficult negotiations,” he said. “We think we may have strikes.”

The union is also pushing local politicians to support a program to combat the fast-rising cost of housing. Last year, Ms. Leonardo said landlords raised the monthly rent for the house she shares with her husband and four children to $1,400 a month, from $900.

Mr. Padilla, a father of three, brings up housing costs with as many voters as he can. When landlords raised his rent by $400 last year, he said they told him, “There’s no law in Nevada that says they can’t raise the rent as much as they want.”

During a brief break from canvassing, he shook his head in dismay. “I take this election seriously because of that,” he said. “There’s always a fight.”

Brett Anderson joined the Food desk as a contributor in July 2019. He was restaurant critic and features writer at The Times-Picayune, in New Orleans, from 2000 to 2019. He has won three James Beard awards, including the Jonathan Gold Local Voice Award, and was named Eater's Reporter of the Year in 2017 for his reporting on sexual harassment in the restaurant industry. @BrettEats