Herman Daly: A Economist Who Future Economists — and Societies — Will Dare Not Ignore

He redefined economics, forging a way forward that does not include the destruction of our environment for economic gain 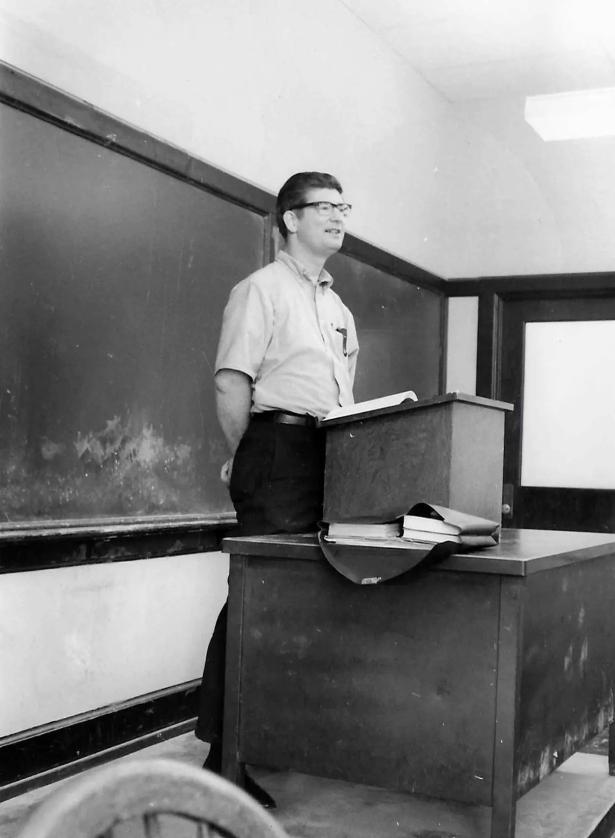 Herman Daly teaching at Vanderbilt University in 1969. Arguing against economic growth, he said, was like poking “a big hornets’ nest with a short stick.”Credit...,The Daly Family

Great thinkers, down through the ages, have regularly had to watch the movers and shakers of their epochs shrug off their core insights. One of our contemporary great thinkers who suffered that fate — the 84-year-old economist Herman Daly — died just last week.

Daly did not, to be sure, go totally unrecognized during his lifetime. In 1996, he won the “alternate Nobel Prize,” Sweden’s annual Right Livelihood Award.

“Herman Daly redefined economics, forging a way forward that does not include the destruction of our environment for economic gain,” Ole von Uexkull, Right Livelihood’s executive director, noted after Daly passed.

But Daly’s death has, by and large, gone unnoticed. No obit has so far appeared in the New York Times or Washington Post or any other major mass publication.

Despite this media disinterest, Daly most certainly does figure to get much more attention in the years ahead. Why? The life’s work of this University of Maryland emeritus professor just happens to directly link the two supreme  challenges of our time: environmental collapse and economic inequality.

Herman Daly pioneered the discipline of ecological economics. He gave us a vision — in works always “crystal clear, conceptually compelling” — of a “steady state economy” that featured “redistribution and qualitative improvement instead of perpetual growth” sure to overload and overwhelm our environment.

We need, Daly believed, to reject “having ever more” and revolve our lives instead around having enough, and that means sharing, a virtue today, he observed, often derided as “class warfare.” But real “class warfare,” Daly noted a decade ago, “will not result from sharing, but from the greed of elites who promote growth because they capture nearly all of the benefits from it, while ‘sharing’ only the costs.”

And how could we arrive at a “steady state,” at an economy that develops qualitatively, not quantitatively? At one point, Daly spelled out a “top 10” list of policies to move us forward in that direction. High on that list: a call to limit the range of inequality by setting both a minimum and a maximum income.

Daly first advocated for this coupling in his 1991 book Steady-State Economics. He contrasted his “min-max” to the conventional economics notion that the poor don’t get hurt when the rich get richer and may actually end up benefiting from the expenditures wealthy people make.

“I argue to the contrary,” Daly wrote in his 1996 book Beyond Growth, “that there is a limit to the total material production that the ecosystem can support, and that it would be clearly unjust for 99 percent of the limited total product to go to only one person. I conclude, therefore, that there must implicitly be some maximum personal income.”

What maximum would be most appropriate?

“A range of inequality permitting a factor-of-ten range difference between the richest and poorest would serve the need for legitimate differences in rewards and incentives,” Daly explained, “while respecting the fact that we are persons-in-community, not isolated, atomistic individuals.”

“No one is arguing for an invidious, forced equality,” he added. “A factor of ten in inequality would be justified by real differences in effort and diligence and would provide sufficient incentive to call forth these qualities.”

But Daly didn’t see anything “sacred about a factor of ten” and felt a factor of twenty could serve just fine. And he saw the Income Equity Act proposed by then Minnesota congressman Martin Sabo — legislation that would limit the tax deduction a corporation could take for executive compensation to no more than 25 times the income of the corporation’s lowest-paid worker — as a step in the right direction.

Sam Pizzigati writes on inequality for the Institute for Policy Studies. His latest book: The Case for a Maximum Wage (Polity). Among his other books on maldistributed income and wealth: The Rich Don’t Always Win: The Forgotten Triumph over Plutocracy that Created the American Middle Class, 1900-1970  (Seven Stories Press).

Note: Obituaries appeared in both the New York Times and Washington Post after publication of this article.