labor Unionizing Is Now on Track To Be a Constitutional Right in Illinois.

In Tuesday’s midterm elections, a majority of Illinois voters backed the Workers Rights Amendment which will enshrine the ability to organize. A coalition of unions, along with socialists, helped propel the campaign. 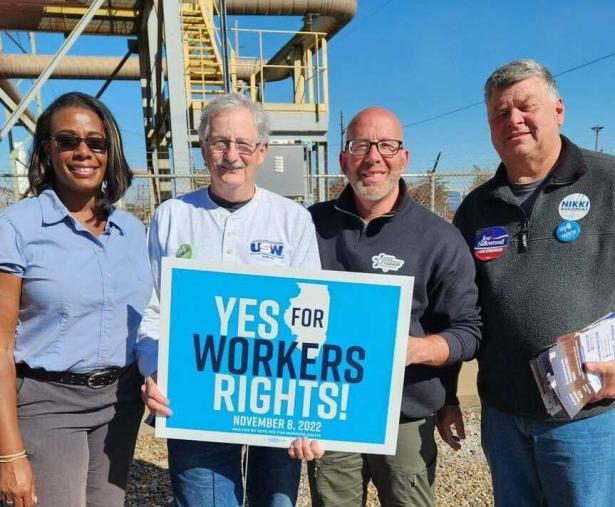 As companies like Starbucks and Amazon continue their efforts to stop employees from unionizing, voters in Illinois passed a historic measure to safeguard the right to organize in Tuesday’s midterm elections.

The Workers’ Rights Amendment (WRA) would enshrine in the Illinois state constitution ​“the fundamental right [of workers] to organize and to bargain collectively … for the purpose of negotiating wages, hours, and working conditions, and to protect their economic welfare and safety at work.”

The amendment also prohibits the state from passing any legislation in the future that interferes with, negates, or diminishes those rights — ensuring Illinois will never enact an anti-union ​“right-to-work” law like several of its neighboring states have done in recent years, including Wisconsin, Indiana and Kentucky.

“We built one of the best coordinated campaigns I’ve ever been involved in,” said Joe Bowen, communications director for Vote Yes for Workers’ Rights — a coalition of unions and progressive organizations led by the Illinois AFL-CIO and Chicago Federation of Labor. ​“Every union in the state stepped up to the plate and played a role in making this happen.”

Bowen explained that the union-funded campaign to pass the WRA included door-knocking, phone-banking, direct mailers and TV ads across the state.

“We help our allies and advocates get elected from the top to bottom of the ballot all over the country. This time, workers were on the ballot,” said Chicago Federation of Labor President Bob Reiter.

The amendment was opposed by the Illinois Policy Institute, a right-wing think tank, which reportedly raised $3 million on a ​“vote no” campaign with substantial help from billionaire Richard Uihlein.

The Illinois Policy Institute claimed that passage of the amendment could lead to higher property taxes in the state, but as political columnist Rich Miller pointed out, ​“the group’s own data clearly shows there would be no projected change at all in property tax increases if the amendment is adopted.”

Much of the business press also came out in opposition to the amendment, including the Chicago Tribune, Crain’s Chicago Business and the Wall Street Journal. But ultimately, the ​“vote yes” campaign prevailed.

“The message was ​‘vote for yourselves,’” said Tim Drea, president of the Illinois AFL-CIO. ​“It energized workers. It made the election about them, not about a candidate.”

“Working voters are realizing that we … don’t necessarily always have to vote for a specific candidate and then hope and pray they’re going to do what we ask them to do,” said Holly R., a leader in the Chicago chapter of the Democratic Socialists of America (DSA), whose members spoke to voters about passing the amendment.

“When you’re trying to get a ballot measure passed, you’re talking about the issues. From an organizing perspective, it’s one of the best ways that we can build deeper ties with working-class folks,” she said.

By not using politicians as messengers, and instead putting workers at the forefront of the campaign, WRA advocates said they were able to win bipartisan support.

“With how corrosive the political environment has been the last few years, this represents a way we can reconnect with each other as Illinoisans and as Americans on something that will directly impact every single one of us,” said Bowen.

The roots of the WRA can be traced back to the 2010 midterm elections, when conservative Republicans took power in several states and launched an assault on unions by curtailing public sector employees’ bargaining rights (as in Wisconsin under Gov. Scott Walker) and passing right-to-work laws, promising it would grow their states’ economies.

In 2014, Republican Bruce Rauner was elected governor of Illinois and tried to establish ​“right-to-work zones” at the municipal level — but was unsuccessful, and was voted out of office at the end of his term. Meanwhile in neighboring Missouri, a right-to-work law was passed in 2017, only to be dramatically overturned the following year in a statewide referendum.

Today, the number of right-to-work states stands at 27. In states with ​right-to-work laws, median household incomes are $8,174 less than in non-right-to-work states, people under 65 are 46% more likely to be uninsured, infant mortality rates are 12% higher and workplace deaths occur 49% more often.

“People have had a taste of right-to-work and seen that it doesn’t deliver on any of the things that were advertised,” said Ed Maher, communications director for the International Union of Operating Engineers (IUOE) Local 150, the union that Bowen credits with launching the WRA campaign.

Maher said the initial idea behind the amendment was ​“to get rid of right-to-work once for all” in Illinois, but the WRA’s language expanded to include broader workplace rights and protections.

“It certainly safeguards current labor laws in the state of Illinois. It also opens the door for expanding subjects of collective bargaining,” explained Marc Polous, a labor attorney and IUOE Local 150 member who serves as the WRA campaign’s counsel.

Although the amendment cannot supersede federal labor law, Polous said it can fill in gaps by guaranteeing organizing and bargaining rights to workers who are excluded from the National Labor Relations Act, such as independent contractors, agricultural workers and supervisory employees.

“I have my freedom of speech rights, my religious rights, my voting rights, on and on. Now a worker can say they have the right under the Illinois constitution to go into their workplace and organize, collectively bargain, talk to their coworkers, and approach management and say they want a change,” Drea said.

Pointing to the Supreme Court’s recent overturning of Roe v. Wade and the resulting scramble by many states to enshrine abortion rights in their constitutions, Polous said the main point of the WRA is to be a forward-thinking safeguard in case either the Supreme Court or Congress erodes workplace rights in the future.

“The short-term consequence [of the amendment] is a real protection of existing rights. But the long-term consequence of it is a proactive approach by labor to say we’re not going to wait for the sky to fall,” Polous explained.

The passage of the WRA comes alongside other successes for progressive ballot measures across the country. In Washington, D.C., voters approved a plan to raise the minimum wage for tipped workers, and in Nebraska, voters supported raising the minimum wage from $9 an hour to $15 (a similar measure raising the minimum wage to $12 an hour also appears on the verge of passage in Nevada). Meanwhile, voters in New Mexico approved an initiative to expand child care access through funds from fossil fuel revenue, and in Massachusetts, voters decided to institute a ​“millionaires tax” to help fund education and infrastructure in the state.

Holly R. of Chicago DSA says of the WRA in Illinois: ​“This amendment was a huge opportunity to educate the voters on … the protections they could lose if the wrong politicians are in office, and how a constitutional amendment will protect them from that danger.”

Advocates of the amendment said the campaign in Illinois should serve as a ​“blueprint” and ​“beacon” for other states to pass similar amendments, especially with public approval of unions currently at their highest point in over 50 years.