Hell of a week for Big Tech 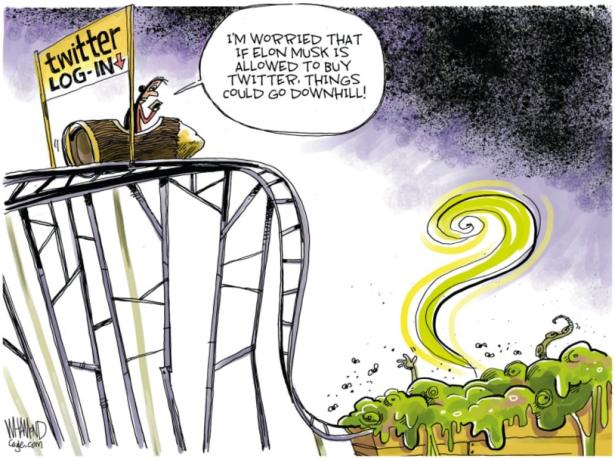 Crypto tycoon Sam Bankman-Fried and his exchange platform, FTX, imploded this week. It's a confusing saga that involves massive financial losses, a bankruptcy filing, and potential federal investigations. But FTX's downfall has also stoked fears that there's a bigger crypto reckoning on the horizon.

The real $44BN question is who will pay the biggest price for Musk’s decision to devalue veracity on Twitter? The billionaire lord or everyone else; the ‘peasants’ in this analogy, who can do nothing but wait to find out; aka, all the Internet users and people whose societies and democracies are being targeted for levelling down by disinformation purveyors

The earnings bombshells from Amazon and Meta and sub-par releases from Alphabet and Microsoft have cast doubt on long-held assumptions about the sustainability of these technology leaders’ earnings power.

Trump has taken some hits in the aftermath of the midterm elections, but the unkindest cuts may have come from a source that was once among his biggest backers — the media empire of magnate Rupert Murdoch.

We are just coming off congressional elections when the media couldn’t get the storyline right 24 hours in advance. Yet before all the 2022 races are even decided, the pundit parade—without a hint of humility—is eagerly handicapping what will happen at the conventions in the summer of 2024.

The outlook for the next six months is starting to look a lot like it did in the summer and fall of 2007, the last time the entertainment industry’s biggest employers faced a work stoppage with the Writers Guild of America.

Why Global News is Essential
By Tamara Pearson
CounterPunch

When a global news site has ten consecutive articles on various aspects of a non-lethal building fire in New York, but just one story about a massacre in Sudan, readers absorb the idea that what happened in New York is of greater importance. Over time, people learn that richer countries and the people in them are much more important than poorer countries.

It has only been recently that the political philosophy espoused by the Prospect has found a wider constituency. Democratic politicians no longer assume that DLC-style neoliberalism is the only politically viable answer for America’s ills. The sorts of ideas the Prospect has long advocated are now getting a mainstream hearing.

The quest to build a more racially just and equitable society happened right alongside the computer revolution. Soon the two fused with the advent of the Police Beat Algorithm, a software system to help police departments collect crime data and determine where to focus crime-fighting efforts.

How to Set Up Mastodon
By Andrew Orr
AppleInsider

Instead of creating a single unified platform, ala Twitter, the Mastodon protocol allows anyone to use open-source software to boot up a server that hosts a Twitter-style community with its own rules. The lack of profit motive and canny design could discourage harassment and abuse, and provide users more control.