All 50 Senate Democrats were joined by 12 Republicans in voting ‘yes’ on a procedural vote and advance a bill to protect same-sex marriages. 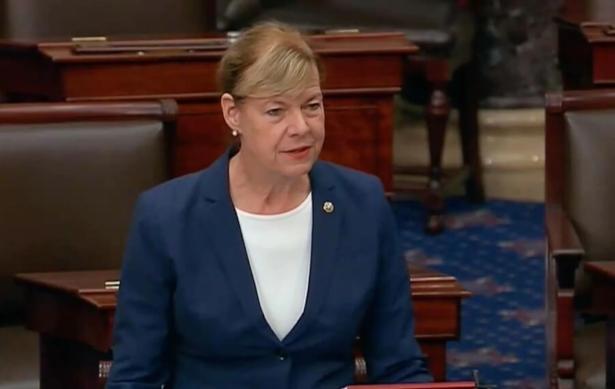 Sen. Tammy Baldwin (D-Wisconsin) delivers remarks on the floor of the US Senate about a marriage equality bill on Nov. 17, 2022 prior to a key procedural vote.,(Image taken from C-SPAN video)

True marriage equality is one large step closer to becoming law, after the US Senate cleared a key procedural hurdle Wednesday on a bill to codify protections for same-sex and interracial marriages.

Wisconsin Sen. Tammy Baldwin, a Democrat, joined with Sens. Susan Collins (R-Maine), Rob Portman (R-Ohio) and Thom Tillis (R-North Carolina) to wrangle more than enough Republican votes to reach a 60-vote threshold in the Senate that prevents opponents from filibustering the bill and blocking final passage. Wisconsin Republican Sen. Ron Johnson voted against the bill, after acknowledging earlier that he misled reporters over the summer about not opposing the measure “just to get them off my back.”

The House version of the bill passed in July in a broad bipartisan vote of 267-157, with 47 Republicans joining all Democrats in support. US Rep. Bryan Steil (R-Janesville) was the only Wisconsin Republican to vote for the measure—Reps. Tom Tiffany, Mike Gallagher, Scott Fitzgerald, and Glenn Grothman voted against it. Both Tiffany and Johnson claimed the measure was a distraction.

The bill would not require states to allow same-sex couples to marry. It would, however, repeal the Defense of Marriage Act, which denied federal benefits to same-sex couples.

Baldwin pointed to the US Supreme Court’s June repeal of long-held abortion protections as reason to enshrine marriage equality directly into federal statutes rather than rely solely on the court’s 2015 Obergefell decision that currently protects same-sex marriage and the 1967 Loving v. Virginia ruling that struck down state-level bans on interracial marriage.

“I believe that there is an urgency to pass the Respect for Marriage Act in order to heal such divisions and provide certainty to married, interracial and same sex couples that the protections, rights and responsibilities that flow from their marriages will endure,” Baldwin said in remarks on the Senate floor. “The Supreme Court should not be in a position to undermine the stability of families with a stroke of the pen,” as the court did in the Dobbs decision overturning Roe v. Wade.

Baldwin said that while many might believe the issue is only about the wedding, the real fight is for same-sex and interracial couples to have a marriage that is legally protected and guarantees a host of rights such as hospital and nursing home visitation, parent-teacher conferences, insurance coverage, estate planning, and more.

As for those who argue there is no case making its way to the Supreme Court to overturn Obergefell or Loving, Baldwin pointed out that the Court’sconservative justices are increasingly using a secretive process called the “shadow docket,” which lets the court issue rulings without holding a hearing or even providing written explanation for their decision. In one instance, the justices allowed Alabama to use a new map for congressional elections held last week even though a lower court ruled it was an illegal gerrymander that violated the Voting Rights Act and discriminated against Black voters. Baldwin wants marriage rights codified before a new case might be fast-tracked by justices through a shadow docket process.

“Today, we took a step forward in our fight to give millions of loving couples the certainty, dignity, and respect that they need and deserve,” Baldwin said.

The Founding Editor of UpNorthNews, Pat Kreitlow was a familiar presence on radio and TV stations in western Wisconsin before serving in the state Legislature. After a brief stint living in the Caribbean, Pat and wife returned to Chippewa Falls to be closer to their growing group of grandchildren.

Courier’s newsrooms practice independent, point-of-view journalism. You can read about UpNorthNews’ values in the statement below. The managing editor of each site, in addition to Courier Newsroom’s VP of Content, has sole discretion and control over the editorial process.