The world of plant-based alternatives is vast; for every new vegan option on store shelves, there’s a “conventional” producer wondering about the comparisons people will make between their two products; even the labels defined by the FDA are in flux. 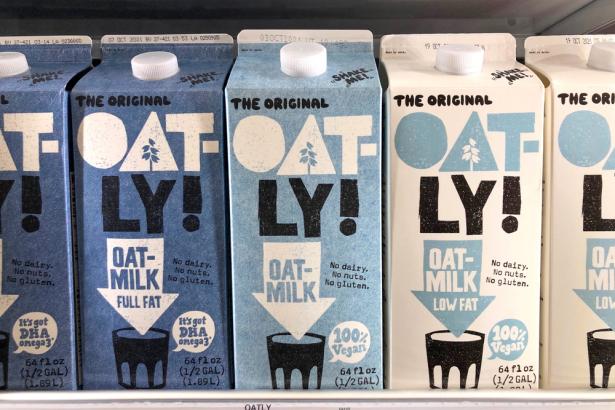 Should oat milk be allowed to use the name milk if it's not obtained from the mammary gland of an animal? ,Sheila Fitzgerald, Shutterstock.

From oat milk to vegan burgers, plant-based dairy and meat products are gaining traction— and sparking debate over their names. But are consumers actually confused about what they’re buying?

French marketing and advertising executives have their work cut out for them. As of this month, France is the first European country to ban words such as “steak,” “sausage” and “bacon” when describing vegan or plant-based alternatives. (However, the word “burger” is still allowed under French law.) The law states that “products that do not belong to the animal world and which, in essence, are not comparable” will not be able to share specific terminology with products derived from animals.

There are similar court battles happening in North America, although not on any country-wide scale, and they’re playing out differently on this side of the Atlantic. In 2018, the City of Montreal sued Rawesome Raw Vegan for using the word “cheese” on its packaging to describe vegan cream cheese. In an email to Modern Farmer, a city spokesperson said that the city received two complaints about Rawesome products claiming to be cream cheese, but that cheese products are governed by Canadian legislation and must “be obtained from the mammary gland” of an animal. Montreal said that Rawesome products do not meet these standards and, thus, it followed up on the complaints to denounce this “problematic designation.”

However, the courts disagreed. While the City of Montreal won its initial court battle, Rawesome appealed that decision and won earlier this fall. Natalia Manole, lawyer for Rawesome, told members of the media at the time that the decision was precedent- setting in Canada. “Nobody has a monopoly on the word cheese.”

Courts in California were on the same page last year when they ruled in favor of Miyoko’s Creamery, allowing them to use words such as “butter” and “cheese” while marketing its vegan products. The lawsuit was originally filed by the California Department of Food and Agriculture in 2020, which said that, in using these terms, Miyoko’s was deceiving consumers.

Porter scoffs at the idea that customers would be confused by plant-based analogs and says the result of the lawsuit is proof of that. Further, Porter says the company is intentionally explicit in its branding as a vegan product. “It’s not something we shy away from; in fact, we think it’s a selling point,” says Porter says. “Additionally, consumers are savvy enough to read packaging and see what ingredients are used in products, so to say otherwise is to underestimate consumers.”

However, some producer associations say that’s not where the confusion might lie. Alan Bjerga, senior vice president of communications with the National Milk Producers Federation (NMPF), calls the idea that customers might be confused between cow milk and almond milk a “red herring.” Via email, Bjerga clarified that what the NMPF is concerned about is “the implied similarity in nutritional content that occurs when a manufacturer uses dairy terms for non-dairy products without FDA-recognized qualifiers such as ‘alternative’ ‘substitute’ or ‘imitation.’”

Bjerga doesn’t hold back, telling Modern Farmer that “consumer confusion over the nutritional merits of plant-based beverages versus dairy is well established and has been acknowledged as a public health issue by the last three Senate-confirmed FDA commissioners. Plant-based lobbyists would like to confuse journalists and the public as to our position, because they know our position has substance—they’d rather switch the topic to fake arguments that distract from their own declining sales.”

This back and forth over naming conventions goes beyond milk. In 2015, Eat Just, Inc. (formerly Beyond Eggs and then Hampton Creek Foods) won the right to use the word “mayo” on its egg-less JUST Mayo spread, as long as it enhanced the label design to clarify that the product was egg-free. The company was sued by Unilever, makers of Hellman’s mayonnaise, ostensibly about the use of the word mayo and egg imagery on the product’s label—but more specifically about Unilever’s loss of market share. The lawsuit garnered a Change.org petition, where more than 100,000 signers urged Unilever to “stop bullying sustainable food companies.” Unilever dropped the lawsuit. While JUST Egg no longer makes a mayonnaise substitute, it has ramped up production on JUST Egg, an egg substitute made primarily from mung beans.

The world of plant-based alternatives is vast, and for every new vegan option hitting store shelves, there’s a “conventional” producer wondering about the comparisons that people will make between their two products. Chad Gregory, president and CEO of United Egg Producers (UEP), says that some consumers might look at label images of egg-substitute products and think they are buying real eggs. However, a “more likely source of confusion is the belief that these products are nutritionally equivalent to eggs. They are not,” Gregory says, pointing to their sodium content as an example.

The actual definitions of terms such as “milk” and “yogurt” are legislated by the FDA, which states that milk is a “lacteal secretion.” For terms such as “eggs,” the UEP turns to the Food, Drug and Cosmetic Act, which uses a “common” name. “The common or usual name of our product, i.e., an egg laid by a bird, is ‘eggs.’ Non-egg products using this word may not be labeled in a way that is truthful,” says Gregory.

However, even the labels as defined by the FDA are in flux. In 2018, the FDA sent out a request for comment on the topic of naming dairy products, and by January, 2019, it received close to 13,000 submissions. “These comments are helping to inform our thinking and next steps on appropriate labeling of plant-based dairy alternatives,” says a spokesperson for the FDA. The administration will look to publish new guidance documents addressing plant-based milks in the coming year, so those original definitions of “milk” could change.

Until then, there’s a gray area for new producers in this emerging market. NewYork-based CHKP Foods, which makes vegan yogurt with chickpea protein, made sure its packaging and branding was clearly marked for American consumers. “First, we made sure that we’re not breaking any law,” says co-founder Noam Sharon, who is based in Israel. But the naming goes further than simply getting on the right side of potential legal issues. For CHKP, the name “yogurt” fits because the process of making the product is essentially identical to making dairy yogurt.

The chickpea mixture is fermented in the exact same process as the dairy yogurt, although there are different formulations of bacterias used for the different protein source. “There’s a very clear threshold that a product needs to meet in terms of acidity in order to call itself yogurt, and we’re totally there,” says Sharon. “If we go through this entire process, the chemical or scientific process, and the result of the process is actually the same, the only difference is where it was sourced.” In this way, Sharon says that the name “yogurt” has more to do with the production process rather than the raw material. With chickpeas a common ingredient in so many cultures, he says many customers are looking to incorporate products just like this into their diets.

“From a culinary aspect, [chickpeas are] rooted deeply in our conscience and tradition,” says Sharon. The idea that customers might be confused about a chickpea-based product is one that Sharon considers sincerely. For him, the answer isn’t in the names used. It’s in the product labels, “setting proper labeling rules—not in a prohibitive way but in a way that actually helps consumers make good choices.”

While the FDA is considering its new guiding principles for labeling plant-based products, a spokesperson says that the chief concern of the agency is that all American “food products are labeled with truthful and non-misleading information.”

For a company such as Miyoko’s Creamery, that’s exactly what it is trying to do when it intentionally uses a word such as cheese or butter to describe its products. Packaging and branding is an incredibly thoughtful and time-intensive enterprise. Brands want to make sure their products stand out on store shelves and that consumers even respond emotionally to them. “Visual cues and verbal conventions can reveal meaning to a consumer and build value for a brand,” says Porter. “Using terms like “plant milk butter” or “plant milk cheese” isn’t a hard decision for us; it’s simply the quickest and most direct way to say what these products are.”

While not everyone would agree, it hasn’t stopped plant-based producers such as Miyoko’s. After winning its suit last year, the company closed a $52-million round of funding and is now sold in 30,000 stores across the US alone. But is it butter? For thousands of customers, the answer seems to be yes.