The Culture Workers Go on Strike

From the New School to museums and book publishers, we’re witnessing the black-turtleneck-worker uprising. 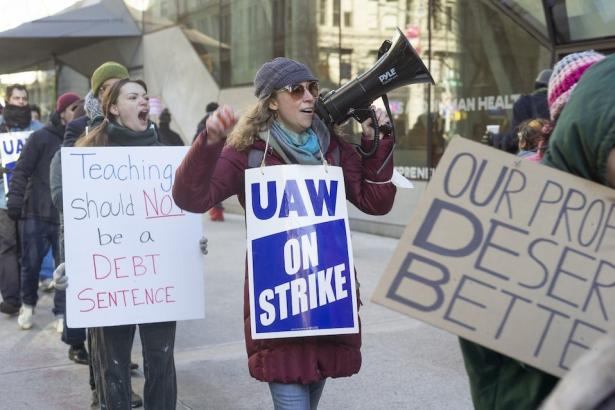 Earlier this month, I spent a morning with Rachel Urkowitz on the picket lines in front of Parsons School of Design and the New School, which is part of the latter. Rachel is my closest friend, an artist who has taught at Parsons for nearly 20 years, instructing a generation of students about color, light, and the history of visual culture. At all the schools under the New School umbrella, 87 percent of instructional staff are adjuncts like Rachel. Yet although they make up the vast majority of professors, the pay gap between them and, say, administrators is enormous: The adjuncts’ salaries comprise only 8.5 percent of the overall budget, with some instructors saying that they make only $4,000 per class. It is impossible to live on such low salaries, especially in places with high housing costs such as New York City.

The mood on the lines was aggrieved but also joyous with burgeoning solidarity. One adjunct tap danced; another blew a shofar; a third had a union sign pinned to their baby’s pram. “Where’s Our Social Justice,” a sign read, perhaps referring to a director of brand strategy for the college who told a student reporter that “social justice plays a role in the New School’s branding”—or more elliptically to the fact that the college was founded over 100 years ago by progressive intellectuals. Tenured professors came to show support, while truck and ambulette drivers honked in appreciation as they passed. It was, for a moment, a version of New York City where those who show students how to write and those who drive groceries cross-country see common cause, their struggles creating mutual recognition, a kind of democratic kismet.

This season culture workers are organizing against their own exploitation. Professors of art, workers at museums, and assistants at a publishing house have all gone on strike or staged public protests during contract negotiations. Call this a black-turtleneck-worker uprising rather than a white-collar one. “Wages are stagnant and we earn far lower salaries than our peers elsewhere,” the union representing employees at the Brooklyn Museum recently tweeted. They’ve been busy protesting outside their work site. During one action, workers held up signs decrying the vacuity of the VIP opening for the museum’s haute couture fashion exhibit: One read, “You can’t eat prestige.” (The union is calling for a 7 percent salary increase this year and raises of 4 percent per year for each of the two years following.) Unions are currently on strike at the publisher HarperCollins and at the University of California system, where 48,000 academic workers are sitting out their underpaid teaching gigs.

In Beacon, New York, and other sites around the country, the staff at the Dia Art Foundation have voted to form a union. Ohio museum workers, known as Columbus Museum of Art Workers United, recently voted nearly unanimously in favor of unionizing with Afscme Ohio Council 8. At the Field Museum in Chicago, workers urged their CEO to recognize their union, and in Philadelphia, after a 19-day strike, museum workers were recently able to get their employer to agree to wage increases totaling 14 percent across the life of the contract until July 2025. It’s such a phenomenon that cultural strikes have even led to that ultimate proof-of-trend, their own podcast, Art and Labor.

These uprisings reveal just how much brain work has become gig work. According to the advocacy group the New Faculty Majority, 75.5 percent of college faculty work outside tenure-track positions. While that leaves their careers far more tenuous than in previous generations, it does carry one positive side effect: Working for multiple institutions to survive means workers cross-pollinate more than they used to. Interacting with other cultural and academic institutions means that they share their new intelligence about employment and contracts with their brethren and unionization thus catches on more rapidly.

This group is part of what I have called Middle Precariat, or the precarious middle class. It’s a group I got to know well while working on my last book, Squeezed, where I focused on adjuncts who lived on Supplemental Nutrition Assistance Program support and schoolteachers whose salaries were so low in expensive cities that they had to moonlight as Uber drivers, literalizing “the Uberification” of education. I argued that we need to see these workers in a continuum with other contingent workers.

Part of why this reckoning is happening now is that inflation has made their already challenging livelihoods even more impossible to subsist on. The Great Resignation and the unionization in other sectors have also helped spur on these actions. They were inspired by new organizing and unionization drives, like those at Starbucks or REI, companies that had a progressive lacquer that didn’t always match their work conditions (much like the New School). Several of these striking culture workers also pointed to how they were now too a part of a gig-based economy, much like Amazon workers, subsisting in underpaid but also fractured workplaces. Lee-Sean Huang, a part-time assistant professor at Parsons, who is now also representing the part-time faculty at the New School, said that before the strike, he was so caught up in teaching and various other work that it was hard to see the bigger picture of the institution. Another Parsons adjunct, Molly Ragan, had, before the strike, felt isolated while teaching and that her work as contingent faculty took place in “silos that were built by design, to keep us from sharing our frustrations but also our joys.”

Ragan, 28, teaches two classes a semester, earning roughly $10,000. The inadequacy of this pay is why she also works full time for the United Auto Workers, the union that now houses the professors’ union, as well as those of the Brooklyn Museum workers and the striking editorial assistants in midtown. Ragan for one feels newly connected not only to her colleagues but to what she describes as “the beautiful world of organizing.” In the past, some of these culture workers weren’t particularly aware of how unions functioned. This isn’t entirely surprising, as individualism was often baked into museums and academia, fields where participants were encouraged to venerate singular creation. But some of these auteurist fixations are also dissipating.

The culture strikes also point not just to new waves in labor rights but equity successes within arts institutions. Having achieved some level of diversity means that there are now art workers who are not heirs and there are a growing number of them. According to the Bureau of Labor Statistics, there were 33,600 such jobs in 2021 and these jobs are estimated to grow at 12 percent between 2021 and 2031, a faster pace than jobs overall.

In addition, some of these workers are now attending workshops about equity yet still can’t pay for their rent, and the hypocrisy is hard to miss, as Laura Raicovich, former director of the Queens Museum and author of the book Culture Strike, explains to me. The lip service toward social justice inevitably provokes a question: If these academic and cultural institutions can’t pay their workers fairly, how can they claim to be inclusive in their marketing literature? The gap in pay between CEOs and regular workers has grown dramatically: That is true in the academy and museums as well. But this rise in income inequality has been accompanied by recognitions—rhetorically, personally, and politically—of the problems of inequity.

Ragan believes that this awareness has only intensified over the last few years. “There’s a whole new class of precarious workers out there who’ve been radicalized throughout the pandemic,” Ragan said. “We’re using those containers—structures that already exist, like the UAW, to help us finally build strong unions.”

The culture worker strikes also betoken something of a return to an earlier time of unionism. While some conservative politicians bemoan such a revisitation of 1970s America—as Aaron Timms put it, “nostophobia”—the cultural and academic workers would seem to benefit from disruptions of business, including the formation of new unions and strikes by existing ones.

By the end of last week, bargaining was stalling and the adjuncts I spoke with didn’t have high hopes for a satisfying resolution. On Monday, the New School union put out a press release vowing to continue the strike for a second week through the Thanksgiving holiday. “The New School’s reputation rests on its progressive history and professed values,” the union said in the release. “Its treatment of the faculty fails to meet those values.”

“The final deal will be some kind of compromise,” Huang mused to me, suggesting that any agreement will be one that both sides will not be fully at peace with. But for him and others, there was a realization that striking itself was not separate from teaching but rather “a continuation of being an educator, only this time the lesson is about organized labor.”

Alissa Quart is the author of five books of nonfiction, including Squeezed: Why Our Families Can’t Afford America. She is the executive director of the Economic Hardship Reporting Project and the co-producer of the radio show and podcast Going for Broke from PRX, which explores American labor.