While recent films in the Black horror genre have presented the terrifying realities of being Black in America, Nanny is rooted in the specific experience of the African diaspora. 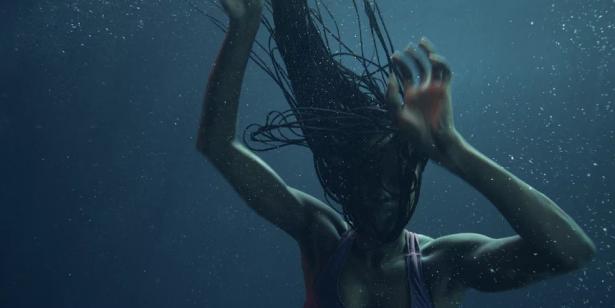 There's something in the water in the new film Nanny. Over two unsettling hours, director Nikyatu Jusu submerges the audience in suffocating night terrors, blending glowing reflections of Black love with discomforting glances amongst kin. The film is an experience for the senses; you'll hold your breath as you're consumed.

While recent films in the Black horror genre have presented the terrifying realities of being Black in America, Nanny is rooted in the specific experience of the African diaspora. Black horror films often subvert systems of oppression but they also often employ Western devices and narratives. In films like Master, Get Out and Candyman, the horror device is the predominantly white institution or neighborhood – which has implications on the Black character's sense of self and being. In Nanny, the white domestic space is the setting, but the tensions are manifested through African folklore.

Aisha (Anna Diop) is a Senegalese immigrant pursuing the American Dream in an attempt to give her son Lamine (Jahleel Kamara), who is still in Senegal, a better life. When she is hired as a nanny for a wealthy white family in Manhattan, she constantly feels the weight of her own maternal sacrifice.

Maternal instinct and intuition are Aisha's power even as she uses those instincts with the child, Rose (Rose Decker). Aisha allows Rose to eat her Jollof rice when she refuses to eat anything else, reads her folk bedtime stories like Anansi the Spider, and shields her from the realities of her parents' relationship. The film reflects the centuries-long tradition of Black women taking care of white children as "the help," and also reveals the contemporary African immigrant experience in which this imbalance continues. 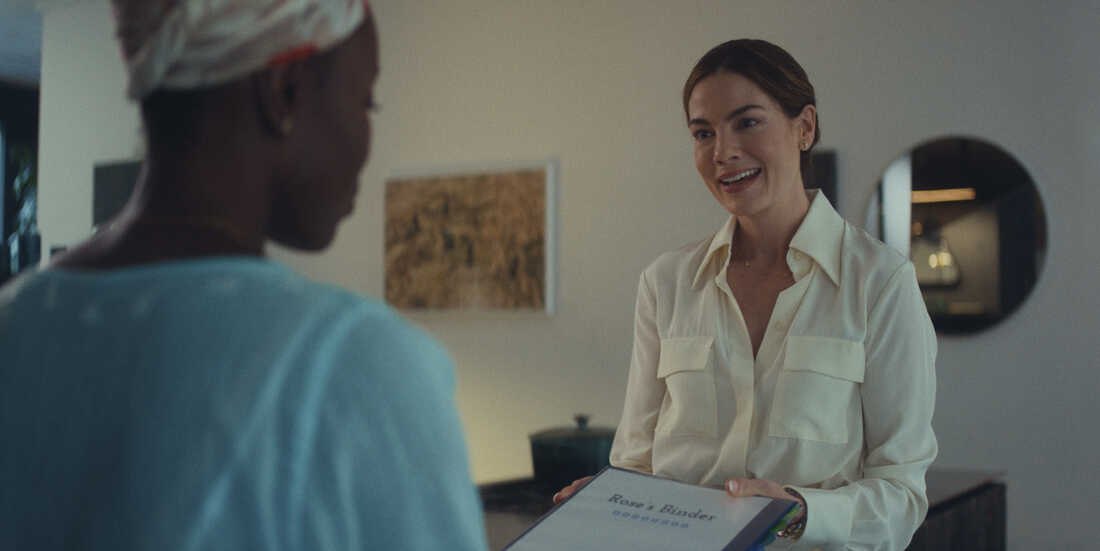 As a child of Sierra Leonean immigrants to the U.S., director Nikyatu Jusu teases out the experience of being a Black immigrant in all its tiring and traumatic layers. There are tense confrontations between Aisha and Amy (Michelle Monaghan), her employer, who faces her own personal turmoil as a mother and woman. Aisha spends sleepless nights in a harrowing guest bedroom.

The scenes are deep and saturated in dark tones. The film's visual language is disorienting by design. Hauntingly beautiful forms materialize to suggest the experience of being submerged in a body of water; the audience is immersed in Tanerelle's delicately blended aquatic soundscape. Sonic echoes, running showers, and beach waves are layered with both Aisha's dreams and her reality. Aisha is shown drowning in her night terrors, which is paralleled with a sense of her displacement in the waking world.

Aisha has a magnetic connection with Malik, the charming doorman of the building, played by Sinqua Walls. She is introduced to Malik's grandmother Kathleen (Leslie Uggams) with whom he is close and who acts as a surrogate mother to him. Uggams embodies the essence of a strong unwavering Black mother. She is magic, in form and practice.

Uggams' character, Kathleen, is a spiritual priestess – or Marabout – as they are known in West Africa. She introduces the idea of Mami Wata, the water spirit within the African diaspora, who haunts the myths of the Middle Passage. These myths stem from the possible destinies of those enslaved Africans who jumped overboard or threw their babies into the sea. Mami Wata is said to have guided these souls as they became one with the ocean.

Mami Wata is traditionally portrayed with an altar adorned with objects of indulgence – mirrors, combs, and fruit. But she is made literal in Nanny as a mermaid-like figure who haunts Aisha's life. In one scene, Aisha swims in a public pool in the daylight only to emerge in the night, face to face with the magnificent, Mami Wata as an omen, who pulls her down into the water as the pool becomes an ocean.

Jusu's film demonstrates that Black stories don't need to be situated within a familiar white framework to be both recognizable and impactful. While films such as the upcoming live-action adaptation of The Little Mermaid may have cast Black actors in preexisting white narratives to be more inclusive and representative, Nanny illustrates that Black people have their own folklore; Black mermaids already exist. Jusu draws from Black history and mythology, while also subverting and recontextualizing them in a contemporary setting. It is a classic New York immigrant story, retold.

Harnessing the power of African folklore

As an Afro-Latina kid who grew up with a nanny from Mexico, the film resonated with me deeply. I had the privilege of having a second mother who was there for me as if I was her own child – and who I later realized had to leave her own children behind to care for me. The representation of kinship dynamics in this film is so real, and so poetic. Watching it on screen became like experiencing scenes from my own life as if holding up a mirror to a reality that was fading.

The final act of the film is bathed in ambiguity. It renders Aisha's journey as an open-ended question and left me wondering whether I had also drowned in a dream or sunk into a dark reality. As Jusu intends, Nanny is a haunting film of personal and racial horrors, diving into the complex experience of being a mother and an immigrant, harnessing the power of African folklore.

An earlier version of this story incorrectly stated that Phylicia Rashad plays Kathleen. Though Rashad was reportedly initially cast in the role, it is Leslie Uggams who appears in the film.