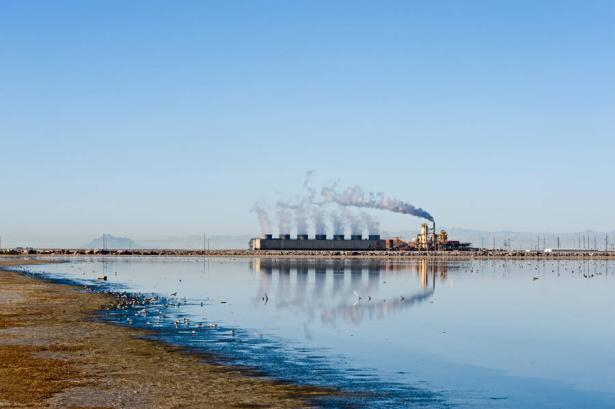 SALTON SEA, Calif. — An October storm of noxious dust sweeps across the desert, turning the sky sepia and choking out residents. Like water bodies across the West, the 340-square-mile saline lake known as the Salton Sea is drying up as drought, fueled by climate change, further dwindles its inflow from the Colorado River basin. As the lake evaporates, its solution of pesticides, chemicals and heavy metals grows more concentrated. Winds whip the hazardous lakebed dust into the air, and more children here than anywhere else in California visit emergency rooms or are hospitalized with asthma-related illnesses.

It’s an environmental disaster with a decades-long history. But mining companies see something else in the perennially-evaporating Salton Sea: opportunity. They want to harvest the lithium-rich brine from beneath the lake and transform the Imperial Valley into ​“Lithium Valley.” Except, the technology to mine the lithium safely and efficiently has not been proven, and some residents worry their communities, already suffering environmental destruction and institutional neglect, could become a sacrifice zone for the dirty part of green energy.

The Salton Sea exists because of industrial meddling with the watershed in the past. More than 100 years ago, the Imperial Valley Press, declared the region ​“the most fertile body of arid land on the continent,” and new settlers began parceling off acres for farming and creating a system of irrigation to bring their vision to life. The lake was created by accident in 1905 when floods broke a head gate on this irrigation canal and diverted part of the Colorado River into the basin. Later, Frank Sinatra vacationed there. Before and after that, the Salton Sea served as a military test zone. Over time, the flooded valley became increasingly salty, hot and besieged with agricultural run-off and algae blooms, which killed off fish and migratory birds. Evaporation continues to concentrate this toxic cocktail and stands to steal three-quarters of the sea’s current volume by 2030, intensifying the wind-blown air pollution.

Now, the Salton Sea is thought to hold one of the largest reserves of lithium in the world. If the mineral can be extracted, this region, 120 miles east of San Diego, could supply more than a third of the world’s current demand. Three companies — Berkshire Hathaway Renewables, Controlled Thermal Resources and EnergySource — are racing for the chance to mine the increasingly valuable material from the sea’s brine.

The demand for lithium is being driven in part by the Inflation Reduction Act, which aims to create a domestic battery supply chain. The Biden administration set a goal to make half of all new vehicles zero-emissions by 2030 and has invoked the Defense Production Act to secure U.S. production of the needed minerals, including lithium.

“We need to end our long-term reliance on China and other countries for inputs that will power the future,” President Joe Biden said at a March press conference. The Inflation Reduction Act subsidizes the goal with a $7,500 tax credit for electric vehicle buyers, but Sen. Joe Manchin (D​-​W​.Va.) made sure these credits can only be applied if the vehicle batteries use minerals from the United States (or a country with a U.S. free trade agreement).

Currently, however, the United States mines only 1% of the world’s lithium, from one mine in Western Nevada. Meeting the administration’s goals depends on expanding domestic lithium.

While lithium is considered crucial for a worldwide green-energy transition, that doesn’t mean the mining process itself is ​“green” or sustainable. In Chile’s salt flats, where nearly a quarter of the global lithium supply is extracted, companies use a method called evaporative brine mining. The method involves pumping mineral-rich water into ponds, where evaporation increases the concentration of lithium. The process uses immense amounts of scarce groundwater and can contaminate local water basins. Chile remains governed by Pinochet-era rules, which privatized minerals and water and have allowed mining companies in Salar de Atacama to consume 65% of the region’s water supply.

Indigenous groups, such as the Lickan Antay, consider water and brine to be sacred. In 2019, after a Chilean economic development agency encouraged the Sociedad Quimica y Minera de Chile to triple its lithium extraction, Indigenous protestors blocked access to the plants. 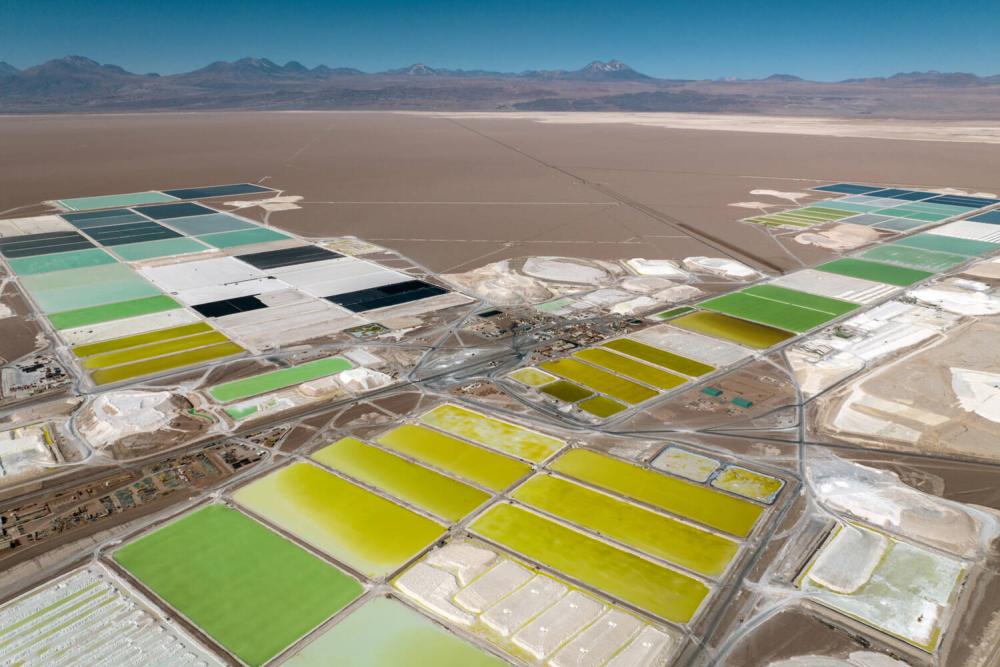 Aerial view of brine ponds in Chile where lithium is mined. MARTIN BERNETTI/AFP via Getty Images

Bringing this industry home presents similar issues. In the United States, 79% of lithium deposits are within 35 miles of Native American reservations and tribal lands. At Thacker Pass, Nev. — site of a proposed hard-rock lithium mine — members of the local Fort McDermitt Paiute and Shoshone Tribe have opposed the project, which they claim sits atop ancestral remains of tens of Northern Paiute that the U.S. government massacred there in 1865. The mining company, Lithium Americas Corp., recently entered into a community benefits agreement with the tribe, but some members continue to push back. Member Shelley Harjo put it this way in an op-ed: ​“Are we willing to sacrifice sacred sites, health and internal balance for short term economic gains?”

In the Salton Sea area, nine different Native tribes occupied the basin, including the acres now submerged by water, for thousands of years. Today, the Torres Martinez Desert Cahuilla Indian reservation sits just north of the geothermal plants where lithium is already being extracted. In addition to lithium, the brine beneath the Salton Sea contains hazardous elements — including arsenic, barium and lead — that some fear could contaminate the broader environment. At an online meeting of the Lithium Valley Commission, Faron Owl — a member of the Fort Yuma Quechan Tribe, whose reservation lies to the southeast of the Salton Sea — raised concerns about the mining plans. ​“Toxic wastes, the gas emissions, the pollution, are being put aside for the lithium demand,” he said, while the state and federal governments ignore the ​“underlying concerns of land, air, and water.”

The three companies vying to massively expand lithium mining at the Salton Sea claim they will use a new process called direct lithium extraction (DLE), by which lithium is drawn from underground brine using filters, beads, solvents or sorbents. Proponents of DLE say it saves time and money and is less environmentally damaging than evaporation brine mining. Ten years ago, Simbol Materials built the first demonstration plant at the site, but it folded after a failed acquisition by Tesla. More recently, a company called Lilac Solutions—aided by millions of dollars from Jeff Bezos, Michael Bloomberg and Bill Gates — tried its hand at DLE in the Salton Sea. This August, the company deemed the hot, toxic brine too difficult to handle for both equipment and workers, calling the region a ​“graveyard for lithium extraction.”

To this day, DLE technology has not been proven at scale.

“Maybe it is a lesser evil, but we need to know the negative impacts,” says Mariela Loera, of nearby Coachella. As policy advocate for the Leadership Counsel for Justice and Accountability, Loera has listened to residents’ concerns about lithium mining since before the official meetings of the Lithium Valley Commission. She says community members are worried about the environmental impacts of a lithium boom, such as air pollution, waste streams and water usage, and they want a public health assessment to guide mitigation efforts.

Adriana Torres Ceja, a former resident of the Salton Sea community of North Shore and a Leadership Council intern, is skeptical of the ​“promises for going green” from the industry. She says this vision feels in tension with the current reality in some local fence-line communities that lack clean drinking water and stable electricity: ​“Why don’t we fix those problems first before creating new ones?” She adds, ​“It doesn’t seem like the climate is the number one thing on [the companies’] mind. To me, it sounds like it’s business profits.”

For its part, the Lithium Valley Commission, a 14-person body tasked with analyzing the impacts of mining lithium and taking public comment, has put forth 44 initial recommendations, most of which urge the state to fund environmental oversight. The report also mentions incorporating reuse and recycling of materials, as it’s possible to recover lithium and other critical minerals at rates above 90%, thus reducing the drive for more extraction.

Even if DLE technology works as promised, Reuters reports the plant owned by Controlled Thermal Resources would use 10 tons of water for every ton of lithium produced. Some residents worry this water use could accelerate the sea’s decline. Asked about these concerns, Katherine Burnworth, mayor pro tem of the nearby city of Imperial and an ​“environmental scientist by day,” claims that geothermal plants generate water from the leftover condensate that goes into their cooling towers. Additionally, she says, upgrades the plants have made to local irrigation systems have helped conserve water that otherwise would have been lost to evaporation. 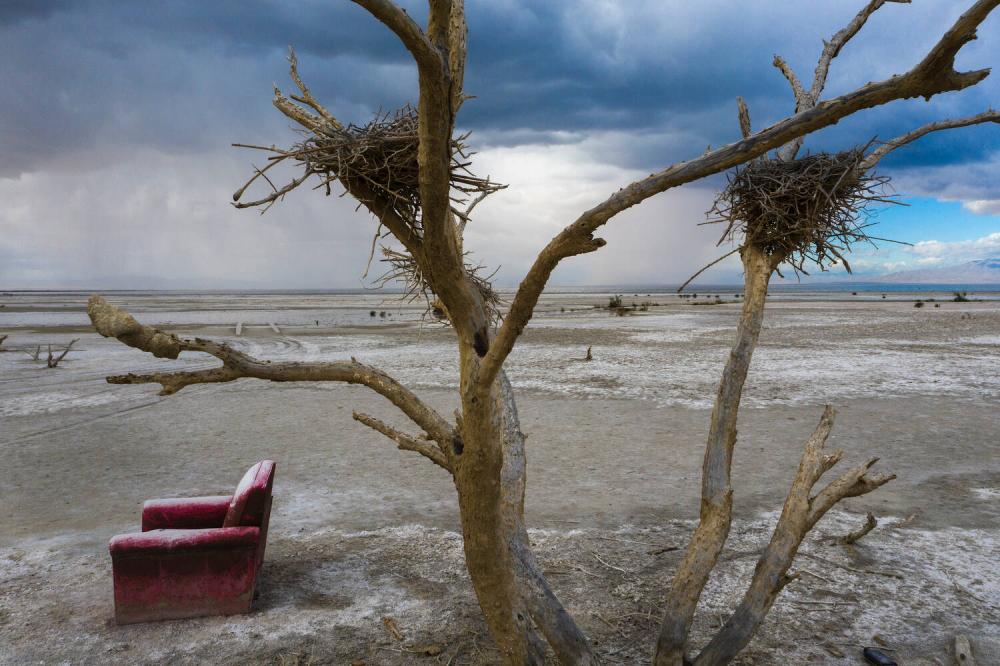 Abandoned nests of a bird rookery on the shore of the receding Salton Sea near Calipatria, California. David McNew/Getty Images

Burnworth sees expanded lithium mining as a much-needed economic engine for the area. The Imperial Valley, where the population is 82% Latino, suffers from an unemployment rate four times greater than the rest of the state. ​“We will do whatever we can to support industry,” she says. But the valley has weathered a boom and bust of green energy investment before. ​“When the solar industry came, it created temporary jobs and it took a lot of farmland out of production,” she says. The construction jobs that built power plants and solar farms failed to stick around. ​“Our communities are adamant that the same mistake doesn’t happen again.”

As the expansion of lithium mining in the area becomes more likely, many residents have shifted from resistance against extraction to agitating for community benefits. Luis Olmedo, of the community health and environmental justice organization Comite Civico del Valle (“Civic Committee of the Valley”), wants to see the industry’s promises — about jobs, environmental impacts and profit sharing — backed by enforceable documents. ​“These are public dollars, public minerals in the public domain,” he says. ​“We want to make sure that they’re not interpreted as just corporate welfare.”

He hopes the revenues reaped from lithium mining can be used for much-needed infrastructure improvements, such as hospitals and community centers, or even to buy back water rights for residents. Part of this, Olmedo says, can be accomplished through the kind of legally binding community benefit agreements suggested by the Lithium Valley Commission, and through California’s new lithium tax—which was fought by Controlled Thermal Resources and EnergySource, but approved by Gov. Gavin Newsom in June.

Despite the challenges, Olmedo says the Salton Sea community hopes to be part of a just transition. ​“We’ve been left behind,” he says. ​“And now we’re being seen as the solution.”

Paige Oamek is a fact-checker and editorial intern at The Nation. Their writing appears in In These Times, The American Prospect and elsewhere.