labor Revolution at the UAW

This week, the votes in the UAW General Officers election are being counted. And, holy shit, the first results appear to signal little short of a revolution. 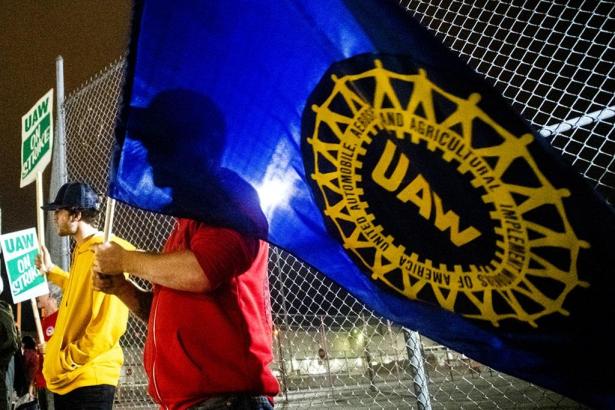 There’s enough significant labor news this week for the mainstream media to resurrect their long-discarded labor beats. Noam Scheiber does a fine job at the Times, as does Josh Eidelson at Bloomberg BusinessWeek, but they can’t cover it all by themselves. Progressive journals and websites do have designated reporters, but most legacy mainstream outlets still lack the dedicated beat reporters who are essential to covering events and issues that affect damn near everyone.

Turning to this week’s news, there are, to begin, all the issues raised by the impasse in bargaining a contract for railway workers and the government’s efforts to impose a settlement, about which I’ll have a piece up tomorrow.

Then there’s the ongoing strike of teaching and research assistants, postdocs, and academic researchers—48,000 strong—at the University of California, the largest strike in the history of American universities. Earlier this week, the university reached a settlement with the postdocs and academic researchers, who number 12,000, but is apparently still far from presenting anything adequate to the 36,000 TAs and RAs—grad students whose yearly incomes come in at the mid-20 thousands, which is hardly enough to cover the cost of a rented room in California’s grotesquely inflated housing market. In a model display of solidarity, the postdocs and academic researchers aren’t returning to the classrooms and are continuing to walk the picket lines until UC can settle with its grad students. Which could take a while.

In fact, it was relatively easy for UC to come up with significant raises, subsidized child care, and the like for its postdocs and academic researchers, as most of their jobs are largely funded by such agencies of the federal government as the National Institutes of Health, as UC academic researcher Mao-Mei Liu notes in her first-person account of the issues behind the UC strike, which we posted earlier today. But the feds provide no funding for the TAs and RAs, whose paychecks come entirely from UC’s till. Which is one reason among many why Gov. Gavin Newsom, who appoints UC’s regents, should involve himself in the process, as this is a problem that only the state can adequately resolve.

As I noted earlier this week, one reason the striking workers can sustain and afford their strike is that their union, the United Auto Workers, has a sizable strike fund—close to a billion dollars, a legacy of the days when they could fund a long strike of their then-300,000-plus members at General Motors. Today, of course, not only is their GM division at about one-sixth that size, but their entire membership, university employees included, is about 400,000. While successful at organizing grad students, the UAW hasn’t been able to organize an auto factory—chiefly, those making German and Japanese cars in the ferociously anti-union South—in decades. Worse yet, a number of their leaders have been convicted of serious dipping into the union’s treasury for personal, often sybaritic, purposes. For which reason, the courts have ordered the UAW to select its new officers through a rank-and-file election, as opposed to a vote of convention delegates, which has been the practice since the union formed in 1936. This week, the votes in that election are being counted.

And, holy shit, the first results appear to signal little short of a revolution. Three incumbent regional directors have been ousted, one in the historic UAW bastion of Detroit, and another in New England (where the new regional director will be the former head of the UAW’s Harvard grad student local). At this stage in the vote-counting, incumbent UAW President Ray Curry is trailing insurgent candidate Shawn Fain by 2,500 votes, and the insurgent candidate for the union’s number two post, secretary-treasurer, has opened a 13,000-vote lead over the administration-backed candidate.

The insurgents ran on the slate of Members United, which encompasses the candidates of a caucus of UAW members entitled Unite All Workers for Democracy (UAWD). The caucus is somewhat analogous to Teamsters for a Democratic Union (TDU), which spent decades criticizing Teamster leadership until their endorsed candidates managed to win control of the Teamsters—in another court-ordered rank-and-file election—last year. UAWD is newer to the game than the TDU, and some of the UAW’s problems—like the difficulties in unionizing Southern factories—aren’t going away no matter who controls the union. But it’s been a very long time since the UAW had a significant cadre of the socialist and social democratic leaders it enjoyed, and flourished with, during the presidencies of Walter Reuther and Doug Fraser. How the UAWD will navigate the union remains to be seen, but they will gain simply by replacing the stale, frequently exhausted, and often corrupt leadership the union has endured in recent years. One thing that’s certain is that the union’s campus organizing will certainly increase.

To what extent the UAWD will actually control the union won’t be clear until the vote count is completed over the next several days. In some regions, the only candidates are administration incumbents, and the vote-counting for the two top offices is far from complete. That said, the union that, from the 1940s through the 1970s, was the only social democratic institution in U.S. history to wield real power and win real gains for workers, may well have a new birth of radicalism. We’ll see how that goes.