Following Russia's invasion of Ukraine, the bond market's 5-10 year projection of annual chain-weighted personal-consumption-expenditures inflation reached 2.27%, raising concerns that another big shock could de-anchor inflation expectations. But since that didn't happen, the Federal Reserve now should reconsider its position. 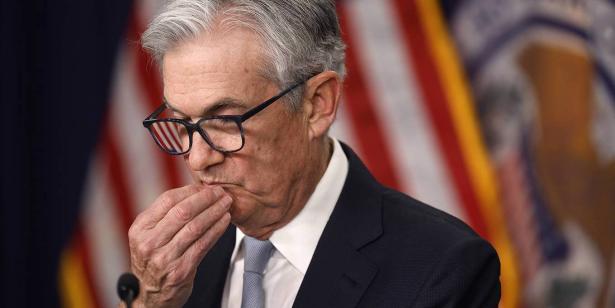 Following Russia's invasion of Ukraine, the bond market's 5-10 year projection of annual chain-weighted personal-consumption-expenditures inflation reached 2.27%, raising concerns that another big shock could de-anchor inflation expectations. But since that didn't happen, the Federal Reserve now should reconsider its position.

BERKELEY – At the start of February 2022, the five-year, five-year-forward consumer-price-index (CPI) inflation break-even rate in the US bond market was hovering at around 2% per year – a figure that corresponds to a chain-weighted personal-consumption-expenditures (PCE) inflation forecast of 1.6% per year 5-10 years from now. Since 1.6% inflation is materially below the US Federal Reserve’s 2% target, I entered that month feeling quite good about being on “Team Transitory” – or at least on “Team The Fed Has Got This” or “Team Inflation Expectations Remain Solidly Anchored.”

But then, at the end of that month, Russian President Vladimir Putin – the wannabe Grand Prince of Muscovy – ordered a blitzkrieg invasion of Ukraine. Things did not go as he had planned. The Ukrainians fended off the initial onslaught, and both sides settled in for a longer war of attrition. Energy, grain, and fertilizer prices skyrocketed. The world began to worry that, come winter, Europe would freeze and many other countries – from Egypt to Nigeria – would starve.

Owing to these fears, the five-year, five-year-forward CPI inflation rate shot up from 2% per year to its peak of 2.67% on April 21, 2022, while expectations of annual PCE inflation 5-10 years hence reached 2.27%. That PCE projection suggested that bond traders had not lost confidence in the Fed’s commitment to its inflation target.

But if one supposes that the width of the Fed’s target zone is 0.6 percentage points – meaning the bond market expects the central bank to remain on target if five-year, five-year-forward CPI inflation remains between 2% and 2.6% – that April 2022 peak raised concerns. For those whose hair was already on fire, there was every reason to fear that we were just one more big supply shock away from losing the inflation-expectations anchor that has kept prices relatively stable for decades.

Perhaps we were. But since we did not get that additional large adverse supply shock, it hardly matters now. The PCE-chain inflation rate for November was just 0.16%, which is less than 2% per year when multiplied by 12. To be sure, one swallow does not make a summer, and one data point does not make a trend. Even the decline from 0.62% in June (7% per year) is not necessarily bankable. After all, we also saw some declines between December 2021 and April 2022, and between August 2021 and December 2021.

As I have said before, this pandemic business cycle has been one of those rare periods when I have not envied the members of the Federal Open Market Committee (FOMC). What they do over the next six months will not really affect the real economy of demand, employment, and production until one year from now, and it will not meaningfully affect the inflation news until a year and a half from now. There will be many new developments over the next 18 months – some of them good, and some of them bad.

Regardless of what the Fed decides to do, it is almost certain to have some regrets afterwards. Will it continue to overdo interest-rate hikes? If so, the economy, two years from now, will be mired once again in secular stagnation – with interest rates at their zero lower bound, and no visible path for a rapid return to full employment. Will the economy achieve a “soft landing” through immaculate disinflation, or will additional supply shocks and political pressures throw us into stagflation and a painful and prolonged recession?

Nobody knows. But if I was on the FOMC right now, I would keep two considerations in mind. First, the Fed does not have to move slowly. The past six months have shown that there are very few downsides to rapid monetary-policy changes. Until this month, the Fed was raising interest rates by a massive 75 basis points at a time, and even that rate is not a speed limit. The FOMC should take advantage of this apparent optionality. When the situation is unclear, it can pause, confident in the knowledge that it can then move very fast when the situation becomes clear.

Second, in retrospect, former Fed Chair Alan Greenspan’s 1996 decision to set the inflation target at 2% per year was very ill advised. Yes, there may be substantial benefits from maintaining and strengthening the Fed’s credibility by getting the economy back to the 2% annual target, even if that target will be raised in the medium term. But is that really the kind of credibility the Fed wants to have? Is it good for markets to think that you will persist with policies that no longer fit new circumstances, just because you said you would? Once again, I do not envy the members of the FOMC this winter.

J. Bradford DeLong, Professor of Economics at the University of California, Berkeley, is a research associate at the National Bureau of Economic Research and the author of Slouching Towards Utopia: An Economic History of the Twentieth Century (Basic Books, 2022).

Project Syndicate produces and delivers original, high-quality commentaries to a global audience. Featuring exclusive contributions by prominent political leaders, policymakers, scholars, business leaders, and civic activists from around the world, we provide news media and their readers with cutting-edge analysis and insight, regardless of ability to pay. Our membership includes over 500 media outlets – more than half of which receive our commentaries for free or at subsidized rates – in 158 countries.