A week of mass upsurge and states in transition 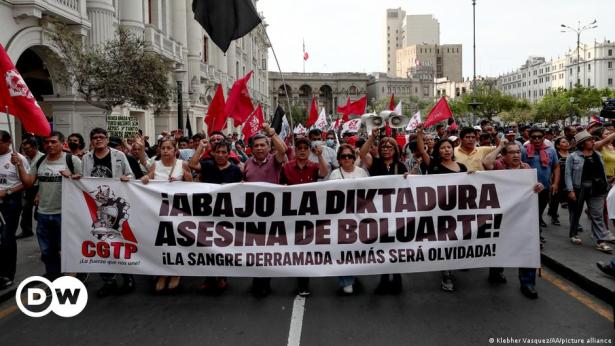 Lima, Peru, this week. Union banner: "Down with the murderous Boluarte dictatorship! The spilled blood will never be forgotten!" Credit, Deutsche Welle

Ukraine aid, like the war itself, is a point of contention on the international left. Supporters see aid as essential for Ukraine’s defense against an imperialist invader. Skeptics regard it as a giveaway to the war industry at best, a fig leaf for the US empire at worst. The dilemma is that both sides have a point.

The KPÖ, the Austrian Communist Party, has been strong in Graz [Austria’s second-biggest city] for a long time, but on September 26, 2021, it became the largest party in the city with 28.9 percent of the vote and Elke Kahr took the seat of mayor.

The housing crisis weighs heavily on Europe. For Mayor Kahr and the KPÖ, this is an absolute priority. The far-right FPÖ party was responsible for housing policy in Graz for five years. They decided that social housing would be reserved for “real Austrians”.

Elke Kahr and her team immediately put an end to this situation. The new mayor aspires to a truly social approach. Rather than social housing, she talks about public housing. “Everyone, including those who make a better living, can get housing from the city, wherever they come from. Graz is currently the only city where municipal housing can be obtained so easily. The Communist Party is an internationalist party. We want a world without disparities. Whatever your origins, your religion, your appearance, for us, what matters are people.”

The KPÖ has always opposed the sale and privatization of public housing. A survey also shows that the inhabitants of Graz are in favor of maintaining public housing.

“We currently have about 12,000 public housing units. In the second half of 2022, we will build 500 new public housing units. High quality housing. Because public housing must not only be affordable, it must also be pleasant to live in. The rent must never exceed one third of the tenants’ income. If the rent is higher, we pay the difference. We have also set up two aid funds, one for raising energy prices and the other for other expenses, such as tuition fees. Anyone can call on it. You can get up to 1,500 euros in subsidies, sometimes more.”

To be able to conduct a social policy on housing, it is important to have enough public space and that basic services remain public. “We need space for housing, schools, daycares, rest homes.... Therefore, the remaining free space must remain in public hands. The KPÖ is the only party that has never stopped fighting against privatization for decades. The energy supply must also remain public. Unfortunately, we find that in Austria, as in many other countries, many services have been privatized. And some make huge profits on this.”

Kahr has been mayor of Graz for a year now. “There is nothing more pleasant than being there for people and trying to improve things with them. I also learn a lot from people. They bring us the knowledge we need. And what is very important to me: it must also be welcoming. You have to touch people not only at the brain level but also at the heart level.”

Becoming rich is by no means an objective for Kahr. She receives a monthly salary of 8,050 euros. She keeps 2,000 euros and pays the rest to the party. A choice that earned him an avalanche of criticism from his political opponents, who judged him as populist and stupid. “But 2,000 euros is a lot of money,” Kahr objects. “A lot of people work hard and don't earn more. I did not become active inthe KPÖ to have more than the others. No, we must give this money to the party. How could we do politics differently? We must make sure that we do not disconnect from people.”

Thousands of people in Peru are traveling to the capital Lima to protest against the country's new president, Dina Boluarte. She took office in December after former leader Pedro Castillo was ousted, following his attempt to dissolve Congress.

Thousands of Tunisians joined a protest calling on President Kais Saied to step down as they marked the 12th anniversary of the ousting of former autocrat Zine El Abidine Ben Ali. Protesters removed barricades and marched towards the central Habib Bourguiba Avenue in the capital Tunis, chanting “the people demand the fall of the regime”.

Overlapping and expanding networks in the climate justice coalition attest to the burgeoning consciousness of the climate crisis for a population whose Cold War-divided peninsula placed North Korea and South Korea in the shadow of a nuclear winter long before the threat of exterminism via global warming became an issue.

Sharon Graham, a lifelong organizer who led her first walkout as a waitress at the age of seventeen, won the Unite general secretary election. While the other candidates were fighting an air war on social media and through the press, Graham was winning the ground war by meeting with individual branches and rallying enough members to win a plurality of votes.

A nationwide shutdown has been endorsed by members of the public, civil society organisations and political parties across various social media platforms, with many planning to either march to the Union Buildings or public electricity utility Eskom’s Megawatt Park offices in Johannesburg.

A part of our work is spreading information, explaining the paradigm of the Revolution, which includes social education, formation, organizing academies, translations in different languages, holding seminars, publishing books, publishing texts. And another part of the work is to build connections, to build up exchanges with other organizations all around the world.

In 1917, demands for independence were rising, not only in Ukraine but also in Finland, the Caucasus and Central Asia. Above all, there was social protest from workers suffering in the economic crisis and from conscripts who no longer wanted to die for Great Russia. Putin decided to overlook certain aspects of history when he invaded Ukraine.