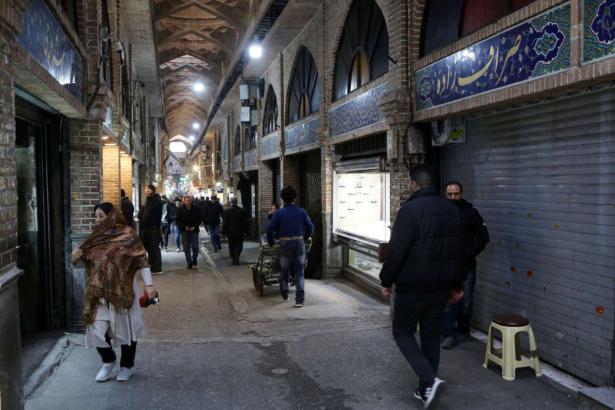 A view of a marketplace after shopkeepers went on a three-day shutter-down strike as part of Mahsa Amini protests in Tehran, Iran, on December 6, 2022.,Fatemeh Bahrami / Anadolu Agency via Getty Images

January 16 marked the fourth month of a new uprising in Iran, which began with protests against the arrest and police murder of a young Kurdish woman, Zhina Mahsa Amini, for her “improper” hijab. More than 18,000 people have been arrested and over 500 killed by the police and the army in the nationwide protests. Four young men were hanged for their participation in the protests and nine others are on death row. Another 109 protesters face the death penalty. Police and soldiers are shooting protesters in the eyes and the genitals. Reports indicate an increase in the severity of the beatings and rapes of women and men in custody. When some who are viciously beaten and raped by the police die of their injuries, the government falsely claims death by suicide. The newly appointed police chief of Iran is the notorious Ahmad Reza Radan, who spearheaded the brutal repression of the 2009 Green Movement and served as the repressive police chief of the provinces of Kurdistan, Sistan and Baluchestan.

Women continue to lead the uprising and oppose not only the compulsory hijab but the regime itself. In the words of a feminist activist inside Iran who wished to remain anonymous: “It is the resistance of us women that will actually mark the future direction of history. If we retreat, we will suffer a great loss.”

Faced with widespread refusal by women to wear the hijab or headscarf, the Iranian prosecutor general’s office has ordered the police to further crack down on women with punishments that can range from fines to expropriation of one’s vehicle, loss of paid employment, loss of the right to travel abroad, loss of government and public services, forced labor and up to 10 years of imprisonment.

Prior to this, in the Islamic Republic, the legal punishment for women not wearing the hijab in public was up to two months of imprisonment and a fine. The above mentioned additional legal punishments are new. Furthermore, the institution of forced labor for unveiled women marks an effort to promote mass imprisonment of women not only for the purpose of misogynistic domination and sadistic sexual abuse, but also for the purpose of producing economic value at a time when the country is on the verge of economic collapse.

What also needs to be singled out is that while the majority of the protesters in the current uprising are young, most are either from the working class or represent the impoverished middle class in a country where two-thirds of a population of 88 million fall under the relative or absolute poverty line.* The four young protesters who were hanged by the regime in December and January were all from the working class: Mohammad Hosseini, a poultry worker; Mohsen Shekari, a coffee shop worker and caregiver for his grandmother; Majid Reza Rahnavard, a shop clerk; and Mohammad Mehdi Karami, a Kurdish karate champion and son of a street vendor.

In a country where independent labor and professional organizing is severely restricted or banned by the state, the few existing genuine labor unions (not state-controlled) have actively participated in the uprising and are now explicitly supporting women’s rights and the rights of national and ethnic minorities in their statements.

In a previous article, I examined some of the explicit feminist dimensions of the uprising. Here, I would like to highlight labor and working-class support for the ongoing demonstrations. Below are a few of the organized labor strikes which have explicitly stated their defense of the uprising. There were also strikes by small businesses, shopkeepers and traditional bazaar merchants that took place from December 5-7 in 50 cities across Iran in solidarity with the uprising.

A View of the Deepening Labor Dimension

On September 24, a week after protests began, the Coordination Council for the Educators’ Guilds, whose leaders are in prison for having organized prior strikes, issued a call for a nationwide strike. The call stated: “Dogmatic murderers have turned the country into a military base for repressing the protesting people.… We will strike alongside street protests so that together we can paralyze the wheels of this repressive system and show off the power of the oppressed to the corrupt, oppressive, misogynist and Other-haters who hold power.” That call led to a two-day sit-down strike which demanded the release of all arrested students and teachers and a prohibition on the entry of police and army personnel into educational institutions. On December 11 and 12, teachers struck again in over 60 cities nationwide.

Meanwhile, the Council of Petrochemical Contract Workers issued two strike calls in late September and late October. Their first call on September 26 stated: “We warn you [the government] that if the arrests, the slaughter of the people, and the repression and harassment of women because of the hijab is not ended, we will not stay silent. Along with the people, we will protest and stop work.… We defend the popular struggle against organized violence and daily violence against women, against poverty, lack of support, and the hell which governs society.” This reference to and recognition of daily violence against women was unprecedented on their part because it went beyond previous demands, which were economic and called for the release of arrested workers. Following the strike call, on October 10 and 11, over 4,000 petrochemical workers in the southern part of Iran went on a solidarity strike. Over 200 workers were arrested, many of whom are still in prison. They attempted another strike on October 25, which was crushed soon after it started. On December 5, petrochemical contract workers went on a three-day strike as part of a nationwide strike wave and demanded the release of all detainees and an end to the death sentences. On December 18, the union issued another statement, which emphasized: “We are no longer willing to live in slavery and degradation.… The executions will not deter us from the demand for a suitable life with dignity and respect.” On January 17, the permanent oil workers went on a one-day strike. However, they only stated economic demands.

The Haft Tappeh Sugar Cane Workers’ Syndicate, which has been protesting against nonpayment of wages, low wages and terrible working conditions for many years, issued demands on October 1, which for the first time included the right to choose one’s attire and the right to free speech and a free education. On October 18, they attempted a strike but were repressed. On November 25, the syndicate issued a joint statement with the nationwide union of retirees in which they stated: “We workers are against any form of oppression, national oppression, gender oppression and ultimately exploitation.… We demand the exit of all armed repressive forces from Kurdistan and the release of all prisoners and detainees.”

On November 23, the Union of Truck Owners and Truck Drivers issued a nationwide strike call . The call stated: “How can we ignore the plight of our innocent co-workers and other people in Kurdistan, Baluchestan, Izeh [in Khuzestan] and other bloodstained cities?” The strike started on November 26 and joined a wave of nationwide strikes December 5 through 7. So far, four of the truck drivers who participated in the strike have been sentenced to 1 to 10 years in prison.

The Alliance of Physicians also called on doctors, nurses and the members of the allied health field to join a wave of nationwide strikes from December 5-7. They specifically opposed the executions, the murder, blinding and rape of protesters, and the arrests of injured protesters by the police and army who enter hospitals.

The ongoing uprising has revealed divisions within the ruling class, as seen most recently in the state-ordered execution of Alireza Akbari, former deputy defense minister and former senior commander in the Islamic Revolutionary Guard Corps who was accused of spying for Britain. Prior to his execution, Akbari had said in an audio file sent to BBC that he was being held because of his closeness to the reformist wing of the government. A government-related site also claimed that the case against him had nothing to do with spying but was about “the transfer of leadership.” Whether these internal power struggles will create a rupture remains to be seen. The bulk of the ruling class belongs to or is connected to the Islamic Revolutionary Guard Corps, which is far too invested in Iran’s militarized state capitalist system both economically and ideologically. However, even Ahmad Tavakkoli, one of the members of the “Expediency Discernment Council of the System,” which is the highest body after the Supreme Leader Ayatollah Khamenei, recently warned that “The riots of the impoverished are approaching.” In response to the government’s opposition to a capital gains tax, he said, “Do not do something that would allow the poor to descend upon us and dismantle us.”

At the end of the fourth month of the current uprising in Iran, we can argue that in comparison to previous uprisings in 2009, 2017-18 and 2019, the degree of working-class participation is greater, and the ways in which the rights of women and minorities are being raised are unprecedented. There is agreement among the majority of the Iranian public that a revolution is needed to open the path to the creation of a peaceful and democratic alternative.

It is extremely difficult, however, to have the debates and discussions that are needed to articulate and realize a democratic alternative inside Iran when the repression is so severe and when feminist, labor, national minority and student leaders continue to languish in prisons. Imperialist regime change will only make things worse. Instead, we need a sustained and powerful campaign of solidarity from feminists around the world to provide education about what is happening and to send material aid to women’s rights and labor activists inside Iran. That can in turn strengthen efforts by imprisoned feminist leaders like Narges Mohammadi, temporarily released feminist leaders like Nasrin Sotoudeh and other feminist activists to reach out to Kurdish, Baluch, Arab, Azari, Bahai and Sunni women to break through ethnic and religious chauvinism and to promote a progressive, feminist and democratic alternative.

Frieda Afary is an Iranian American public librarian, translator, writer, activist and author of Socialist Feminism: A New Approach (Pluto Press, 2022). She is also the producer of Iranian Progressives in Translation and socialistfeminism.org.

Truthout provides daily news, in-depth reporting and critical analysis. To keep up-to-date, sign up for our newsletter by clicking here!