Half-Million on Strike Across France 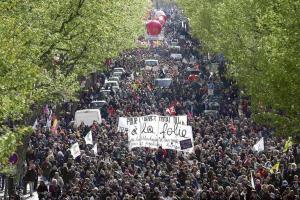 The revolt in France is growing! Up to 500,000 people went on strike and took to the streets across the country to protest unpopular pro-business labor reforms that would leave many people unemployed and would be an attack on worker's rights. France's largest cities saw a new wave of street demonstrations and strikes as student groups and unions tried to maintain pressure on the government just days before the bill is brought to Parliament.(teleSUR English)
Subscribe to CGT