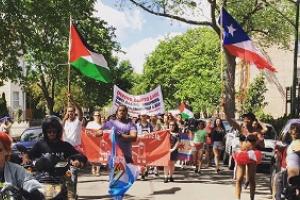 The Chicago Dyke March, the annual gay rights march without corporate sponsorship has anti-racist core values. In the march's Jewish contingent were Jews who were Zionists, and anti-Zionists, but who supported gay and Palestinian rights. There was an incident involving a few who did not support Palestinian rights, and a massive debate and controversy has evolved. Here are statements from Jewish Voice for Peace and IfNotNow, supporting the position of CDMC.
Subscribe to Chicago Dyke March