Larry Cohen In These Times 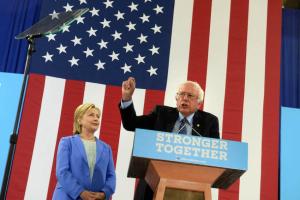 Now that Sanders has declared his support for Clinton, a senior Sanders campaign advisor maps the road ahead. The platform is likely the most progressive ever. The future of the political revolution, however, goes far beyond the platform, rules, convention or even the 2016 election. In the next two weeks, Bernie Sanders will begin to describe how his massive organization of millions can function beyond this moment and help build a movement for social and economic change.
July 14, 2016 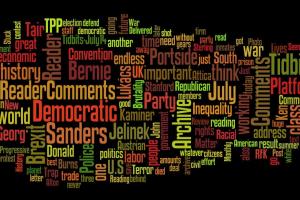 Reader Comments: U.S. Stuck in an "Inequality Trap"; New Wave of Police Brutality and Racial Terror; Photo That Should Be Seen Around the World; Sanders Delivered Most Progressive Platform for Democrats, Ever - Yet Still a Long Way to Go on War and Military Policy, and Trade Policy Still Needs to be Changed; About Demonstrations at GOP Convention; Brexit; James Green; Tair Kaminer; Austrian elections; Remembering Donald Jelinek; Save the Georg Lukacs Archive... 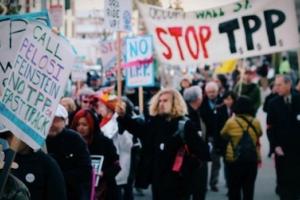 When it came time to fight, the Sanders forces tried two tactics. The first was an amendment to the compromise plank, tweaking it to say "and that's why we oppose the TPP." The second was a separate amendment that would have put the party on record against a TPP vote this year.
July 8, 2016

Democrats and the TPP: Who Speaks for the Future? 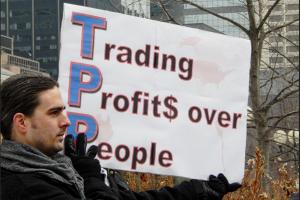 Hillary Clinton and Bernie Sanders are both on record against the TPP. So why does the draft Democratic platform only say that “there are a diversity of views in the party” on the TPP? This weekend Texas populist Jim Hightower will present the Democratic Party platform committee with a Bernie Sanders-sponsored amendment to make a clear statement against a lame-duck vote on TPP.
June 28, 2016

The Clinton Campaign Is Obstructing Change to the Democratic Platform 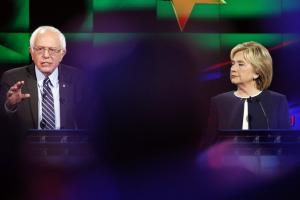 The Clinton campaign was ready to acknowledge serious problems: We need fair trade policy, inequality is a horrible problem, and unchecked climate change will wreck the planet. But when it came to specific policy changes, they often balked. Amendments against the Trans-Pacific Partnership trade agreement and backing Medicare for all failed, with all the Clinton delegates voting against.
Subscribe to Democratic Party Platform