When it came time to fight, the Sanders forces tried two tactics. The first was an amendment to the compromise plank, tweaking it to say "and that's why we oppose the TPP." The second was a separate amendment that would have put the party on record against a TPP vote this year. 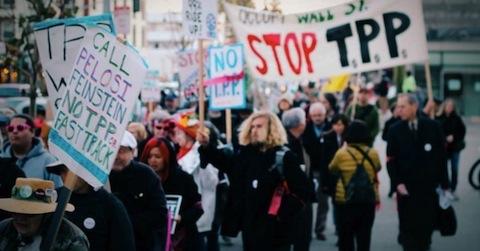 "We want unity, but we want it real. We do not want it on the backs of working people," said Dr. Cornel West, who was selected to serve on the committee by Bernie Sanders. "We want opposition to the TPP in this platform." , Photo: Stop FastTrack/flickr/cc

ORLANDO -- Supporters of Bernie Sanders came up short in a fight to oppose the Trans-Pacific Partnership in the Democratic Party platform, a short-term victory for the Obama administration that could spark another fight at the national convention this month.

By a vote of 116 to 64, the platform committee approved language -- critical of "trade agreements that do not support good American jobs," but evasive on TPP -- that had been hammered out by labor groups that supported Hillary Clinton. Seventy-two of the platform committee members were Sanders supporters, meaning that eight of them used their secret ballot to cast a unity vote instead of backing Sanders's position.

They were encouraged to do so by labor leaders, who did not mention that an anti-TPP vote would embarrass President Obama -- an argument that had succeeded in blocking anti-TPP language at the last meeting of the platform drafting committee. Instead, they said that the compromise language did plenty to blunt Republican efforts to run on trade.

"We take what Trump has used as a soundbite, and we turn it into a standard," said American Federation of Teachers president Randi Weingarten.

"The trade union movement does not take a back seat to anybody regarding its opposition to bad trade deals," said Lee Saunders, the president of the American Federation of State, County and Municipal Employees, and the sponsor of the compromise language.

Sanders's forces, in the committee and in rows of seats set up for non-voting spectators, found that case to be wanting. They made the campaign against TPP the focal point of this weekend's debate, organizing delegates and representing the 800,000 anti-TPP signatures Sanders's campaign had obtained with stacks of cardboard boxes.

When it came time to fight, the Sanders forces tried two tactics. The first was an amendment to the compromise plank, tweaking it to say "and that's why we oppose the TPP." The second was a separate amendment that would have put the party on record against a TPP vote this year.

With 90 delegates supportive of Clinton, 72 supportive of Sanders, and 25 uncommitted to any candidate, they hoped that at least a few Clinton supporters would see the merits of opposing TPP, a position Clinton herself came to adopt during the primaries.

“We’ve had no speech in favor of TPP, but we can’t bring ourselves to say that we oppose TPP?" asked an incredulous Robert Kraig, a Sanders delegate from Wisconsin.

Ben Jealous, the former NAACP president who introduced the brief amendment to the compromise language, argued that the Democratic Party would give away an electoral advantage if it was too slippery about trade. He warned that Republicans were likely to reflect Donald Trump's campaign rhetoric, and oppose the TPP in their own platform, creating an opening for the GOP  --"a Republican opponent who intends to run clearly against bad trade deals" -- that had never existed before.

Jealous's amendment failed, winning just 74 votes, as cries of "shame!" and "you're giving Trump the vote!" arose from the back of the room.

"We all have to go home tomorrow and face our neighbors and tell them what we did to protect their jobs," said Carli Stevenson, a Sanders delegate and platform committee member from Indiana, who reminded the room of how powerful the trade issue had been there. "The best way to do that, and to leave no doubt, is to say that the Democratic Party opposes the Trans Pacific Partnership."

The defeat of Jealous's amendment made it clear that the Sanders forces would lose on every trade question. Some of the observers turned their backs, and held their thumbs down, out of disgust for what had just happened.

"This is the Clinton campaign in a nutshell -- surreptitious, and always with an agenda," said environmental activist Anthony Rodgers Wright. "I didn't really have much hope that the corporate wing of the Democratic Party would want to take a stand."

The vote on the amendment to deny any TPP vote in Congress went forward anyway. Jim Hightower, the progressive commentator and Sanders delegate from Texas, warned committee members that failing to go on the record would help Trump's campaign.

"He is gonna hammer Hillary mercilessly on the wimpy language in her platform," said Hightower. "I offer this amendment as a form of political viagra."

The Hightower amendment quickly went down to defeat, with 71 committee members in support and 104 opposed. A small group of observers then walked out of the room, yelling "sell out!" Richard Hillwig, who had come wearing a T-shirt with the Green Party's logo, said that the party had lost him for good.

"I voted for Obama twice, but I'm never voting for a corporate candidate again," he said.