July 26, 2013
Written by John La Touche, with music by Earl Robinson, as part of a WPA theatre project in 1939, Ballad for Americans was first performed by Paul Robeson. The song emphatically asserts the democratic character of Amerian nationality from class, ethnic and racial, and religious angles, declaring that to be American is to be "Irish, Negro, Jewish, Italian, French and English, Spanish, Russian, Chinese, Polish, Scotch, Hungarian, Litwak, Swedish, Finnish, Canadian, Greek and Turk and Czech ... and lots more." For more Songs of Immigration, Deportation and Identity, go here.

July 26, 2013
No Irish Need Apply is performed by Pete Seeger, Earl Robinson, Odetta, Ronnie Gilbert, Alan Lomax, Tommy Makem and Chet Washington on the album Songs of the Working People -- From the American Revolution to the Civil War (1987). For more Songs of Immigration, Deportation and Identity, go here.
July 4, 2013 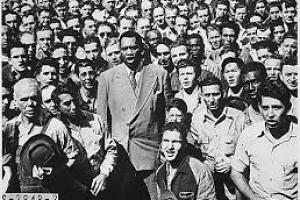 To some, patriotism means "my country -- right or wrong." To others, it means loyalty to a set of principles, and thus requires dissent and criticism when those in power violate those standards. Not enough Americans are aware that much of what we consider our patriotic culture, especially our iconic music, was created by artists and writers of decidedly left-wing sympathies.
Subscribe to Earl Robinson