What does it sound like when three guitar greats "take a break"? Epic, as you can experience in this outtake from the movie Hail Hail Rock n Roll. 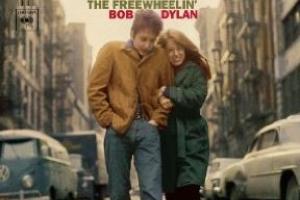 On this fiftieth anniversary of The Freewheelin' Bob Dylan, here are five songs from the album that have powerfully shaped both music and politics over these decades: Blowin' in the Wind; Masters of War; It's a Hard Rain That's A Gonna Fall; Don't Think Twice, It's Alright and Talking World War III Blues.

This Friday Nite Videos is devoted to the fiftieth anniversary of the release of The Freewheelin Bob Dylan. Here's Eric Clapton at the 30th Anniversary Concert Celebration for Bob Dylan in 1993. Notice the electric guitar? And nobody's booing.