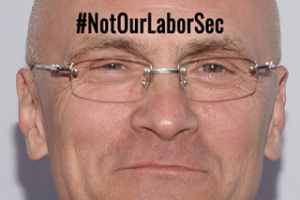 The confirmation hearing for Trump's Secretary of Labor nominee, Andrew Puzder, was scheduled to start January 17 but has been pushed back and may not happen until next month. It may be that worker protest is having an impact. Critics have revealed that Puzder's company has frequently violated wage and hour, and safety and health laws.
Subscribe to Puzder