The confirmation hearing for Trump's Secretary of Labor nominee, Andrew Puzder, was scheduled to start January 17 but has been pushed back and may not happen until next month. It may be that worker protest is having an impact. Critics have revealed that Puzder's company has frequently violated wage and hour, and safety and health laws. 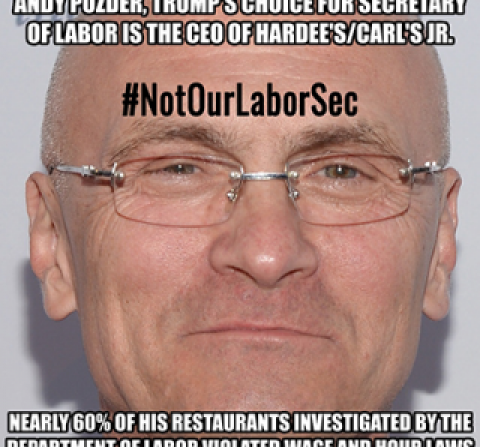 ,
Fight for $15, organized under the Service Employees International Union, is fighting hard against Andrew Puzder, CEO of fast food chain CKE Restaurants, hoping to derail his Senate confirmation as U.S. Labor Secretary.
For now, it seems to be working.
Reuters reported last week that the Senate leadership has now pushed back Puzder's confirmation hearing to February from a tentative date of January 17, 2017. "For years, Puzder said Obama administration policies have saddled industry with higher costs and contributed to a government-mandated restaurant recession," Reuters added.
Fight for $15 organized marches and rallies at Puzder's Carl's Jr.s and Hardee's restaurants and corporate offices, as well as at U.S. Department of Labor branches in two dozen cities last Thursday, protesting against Donald Trump's pick for Secretary of Labor. "Puzder's confirmation battle follows an election defined by workers' frustration with a rigged economy that benefits the few at the top, and after a banner year in Fight for $15."
And the union organization has the figures to prove its success in raising minimum wage and pushing for union rights. "Nineteen states raised pay for 4.3 million working people at the end of 2016, including in four states where voters approved minimum wage ballot initiatives on Election Day 2016. In those four states, "yes" votes exceeded the vote totals for either of the major parties' presidential candidates – striking proof of the broad public support for raising wages across party lines and in different regions of the country. The New Yorker recently hailed its successes as one of the five biggest business stories of 2016," the press release stated.
Fight for $15 states that CKE's latest financial disclosures reveals that Puzder has made between $4.4 million and $10 million in recent years, which means he makes more in one day than he pays his minimum wage workers in any given year. "Despite this, he has been an outspoken opponent of minimum wage hikes that would allow his workers to meet their basic needs," the organization reported. Researchers at the University of California at Berkeley found in 2013 that fast-food CEOs like Puzder cost taxpayers $7.3 billion per year in public assistance by holding down pay for their employees.
"As labor secretary, Puzder would be charged with upholding many of the labor laws and regulations CKE routinely violated during his time as CEO," Fight for $15 declared. It said that in 60 percent of Department of Labor investigations since 2009, CKE restaurants and franchises were found to have violated wage and hour laws. Since Puzder became CEO of CKE in 2000, the Occupational Safety and Health Administration (OSHA), which falls under the DOL, has found 98 safety violations at Carl's Jr. and Hardee's locations, with 36 of them capable of causing death or grave physical harm.
Reuters also reported that Senate Democrats including Elizabeth Warren of Massachusetts held a hearing on Tuesday after Republican rivals rebuffed their request to bring witnesses to Puzder's upcoming confirmation hearing. The report stated, "The protestor-packed event included testimony from Laura McDonald, 51, who was a general manager at a CKE-owned Carl's Jr restaurant in California from 1988 until 2012. She has joined two potential California class-action wage and hour lawsuits against CKE, which during her tenure switched general managers from salaried to hourly workers. In 2004, CKE paid $9 million to settle California lawsuits claiming unpaid overtime for general managers."
McDonald explained, "When CKE made general managers into hourly employees, it set our wages so low that we had to work 47 ½ hours a week just to earn the same money we've been being paid as a salary."
Puzder does have a prominent supporter pushing for his confirmation. The 56-year-old International Franchise Association feels strongly that the CKE chief executive officer should be confirmed, previously stating that he would be an "exceptional" choice to lead the Labor Department. In regard to last week's protests, Matt Haller, IFA's senior vice president of public affairs, stated, "These protests distract from the real issues at hand for our nation's leaders—how to create economic growth at all levels, which is the only real solution to income inequality in America."
But one Carl's Jr. worker in Austin, Texas, making $9.50 an hour, who participated in last week's rallies disagrees. "If our elected leaders really want to make America great, they should confirm a labor secretary who looks out for working people like us, not someone like Andy Puzder who has made millions by stealing our wages and who wants to replace American workers with machines." In an interview with Fortune, Puzder was quoted saying he intends to take humans out of the fast food equation. To that he stated recently, "I never mentioned robots. We could never take out all the front-line employees."
Jessenia Adame, the $9.50 an hour employee is not convinced. She strongly stated her position at last week's rally: "I'm no robot, and make no mistake. I do need a bathroom break and I will sue if I'm sexually harassed on the job."
Janet Sparks is the former publisher of the Continental Franchise Review, an industry newsletter that covered the franchise community for over 30 years. She has also been a columnist for a leading franchise magazine for the past 13 years. Today she is an independent journalist who engages in investigative reporting, tackling complex issues that impact the franchise industry.
Subscribe to Portside