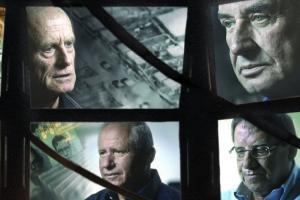 "The importance for me is the message the film gives to the Israeli public. The message is that occupation is bad for the future of Israeli society from all aspects - humanistic, economic, moral, etc. I can assure you that all six former heads and some 95% of my colleagues and workers from the Shin Bet from over three decades all agree with the overall conclusions of the film." -- Carmi Gillon Shin Bet Director 1994 - 1996
Subscribe to Shin Bet